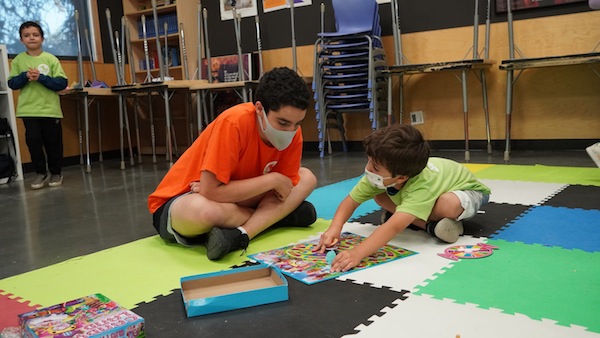 In these uncertain times, JCC Camp Shalom set out to continue to be a constant source of fun and a safe environment for the whole community. For the second year, the exceptional circumstances of the COVID-19 pandemic demanded that the camp’s plans be reevaluated and adapted, as it partnered with King David High School to move the majority of its operations to the school’s building for last summer.

Camp Shalom is an inclusive Jewish day camp serving children, youth and teens from ages 3 to 18 years old, year-round, during school breaks and professional development days. Since the inception of the Inclusive Summer Camp Experience program in 2009, more and more children with diverse needs have attended Camp Shalom and participated in group activities, including overnight camping trips.

The number of children with diverse needs who attend Camp Shalom has grown from a handful to more than a dozen per summer – and the range of assistance provided for families has grown as well. Families are able to access more camp sessions and the camp can now support a wider range of ages and needs. Huge improvements have been made in accommodating campers in a true inclusion model and in providing opportunities for more Jewish programming beyond the summer, including Sunday Hebrew schools for those who did not have access to them prior to their experience with Camp Shalom.

Thanks to the contributions of the Diamond Foundation and the Snider Foundation, Camp Shalom is able to support more campers and staff with diverse needs by providing special training sessions, mentorship programs and one-on-one support for those campers who need it. Campers who were part of the first inclusive camp experiences are now teenagers and young adults who are still connected to Camp Shalom, and some are now camp staff. This past year’s biggest achievements included engaging about two dozen children, youth and teens with diverse needs and successfully integrating them into the general camp program alongside 120 to 150 other campers in the camp’s preschool, school-age and teen programs.

JCC Camp Shalom likes to think of all youth as being in transition. It pays special attention to campers transitioning from childhood into teenagehood and those teens who are about to become counselors. Work experience is a huge milestone as they enter high school. At camp, they go from being campers to participating in the teen programs, to joining the staff team.

Regardless of their developmental stage and/or maturity level, and taking into consideration their diverse needs, these teens need more support and adaptations than any other group with which the camp works. Careful planning and consideration of their needs has resulted in a successful program that provides them with social and organizational education that will benefit them in the future, as they look for employment, as well as in other areas of their lives.

JCC Camp Shalom is the largest summer Jewish day camp for youth in Vancouver, but its responsibility continues, as the engagement with youth extends beyond summer camp to throughout the year. As teens develop, Camp Shalom recognizes their need for adults with whom they can connect, that they can trust and who can be positive role models. Staff from the summer teen camp programs are educated and qualified to sustain positive and appropriate relationships with youth as they age. The inclusion model of camp programming allows campers with diverse needs to have an unforgettable Jewish experience at Camp Shalom.

Digivations is again offering its LEGO+Arts Imaginerium camp at the Jewish Community Centre of Greater Vancouver and elsewhere this summer. (photo from digivations.com)

Some kids will be spending the summer hanging out with crawly critters, walking a highwire, creating video games or dusting for fingerprints.

Bugs without Borders in Toronto, as one example, gives kids aged 5 to 12 a chance to interact with flying and buzzing creatures, including exotic insects and reptiles. They’ll learn all about what the bugs eat, how they live and how they spend their days. Trips include fields and ponds, to observe and collect various insects and amphibians.

For the science inclined, there’s University of Toronto Mississauga Forensics Camp, for ages 9 to 13. Campers scour a crime scene investigation, dusting for fingerprints, collect and analyze clues and learn the science behind all of those CSI shows.

Meanwhile, closer to home, at Vancouver’s Stanley Park, is Eco Detectives Summer Day Camps, for ages 7-11. Kids can embark on an “exciting educational adventure amongst the giant trees, sandy beaches and hidden wetlands of Stanley Park,” according to the camp’s website.

Pear Tree Education’s Summer Camp Vancouver, for ages 5-14, is at the learning centre in Kitsilano. Those aged 5 to 6 can make “flubber” and learn kitchen science; those 10 to 14 can learn graphic design; “Pear”formers ages 10 to 14 learn dance, musical theatre and acting; and Film Noir, for ages 10 to 14, includes screenings, creating a film and directing skills.

Also local, run out of the Jewish Community Centre of Greater Vancouver, is Halutzim Youth Adventures camp, for those entering grades 5 to 8. Campers will explore adventures in waterslides, skim boarding, hiking and biking, as well as a four-day camping excursion. The JCCGV offers several other day camp options as well, for kids as young as 2.5 years old.

“We create different imaginative projects based on what is current and topical,” co-founder Anne Deane Berman told the Independent.

A third to a half of the overnight camp kids happen to be Jewish, she added, leading them to include Shabbat services.

When the camps began six years ago, they had nine kids. To date, nearly 5,000 kids have participated, she said. Expected next summer is also Sci-Fi Fantasy and Theatrical Combat, for ages 8 to 14, focusing on combat swordsmanship, story-making and costume design.

As it did last summer, this August at the JCCGV, Digivations is offering several day options, including LEGO+Arts Imaginerium, for kids 6 to 12, during which campers solve challenges through LEGO and rocket building, art projects and theatre. In Tsawwassen and North Delta, the organization is offering Camp Half-Blood as well as LEGO+Arts Imaginerium and a couple of other creative technology- and innovation-focused camps.

For something further afield, or at least much further east (and south), there’s Youth Digital in North Carolina, which offers kids ages 8-16 various technology learning experiences, such as App Camp, 3-D Game Design, and Animation. At the end of their session, campers will have created their own playable apps and games.

While there are other courses offered with other companies in these categories, Sharp said they’re either simplistic drag-and-drop or college level courses, but, for youngsters, there are no other game design courses in between that require programming.

“The reason why it’s so important for kids to design games, it’s taking something they love to spend time with so much … you can take that, and tell them they can create games, and be on the creative side of technology. It blows their minds.”