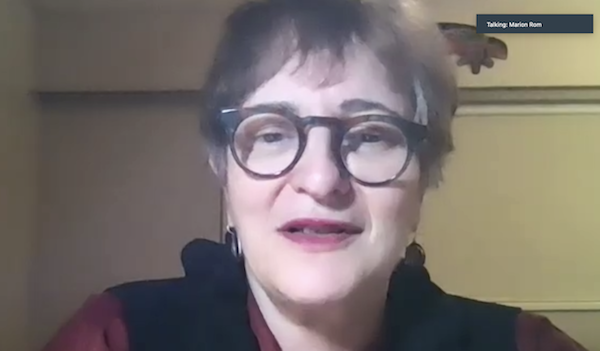 Marion Rom, who works with gender-diverse youth, spoke as part of a Beth Tikvah-hosted panel on the topic Navigating Gender and Sexuality in the 21st Century. (screenshot)

“Almost one-third of people who have gender dysphoria will attempt suicide and have mental health issues, and that’s why we often have such a high rate of kids with eating disorders who are transgender,” said Marion Rom, a counselor who works with gender-diverse youth in the Lower Mainland.

Rom was speaking as part of a March 11 panel on the topic Navigating Gender and Sexuality in the 21st Century. She defined gender dysphoria as when “your body doesn’t match the sense of who you are.” She also explained to the 65-plus attendees of the discussion the difference between sex and gender, some of the terminology around gender, and a few resources for those who want to learn more.

The panel, which was hosted by Beth Tikvah Congregation, also included Dean Kaplan, who joined the conversation from Washington, D.C., and the Abelson family – Kay, Bernard and their son Jason – who live here. The discussion was started by the congregation’s spiritual leader, Rabbi Susie Tendler.

“I think that we have a special mission, as the Jewish people, of finding people who have a potential to be marginalized and always elevating them, along with elevating everyone, to ensure that we are all in a sacred space,” said Tendler. She described her rabbinate as being “about opening doors” and a kehila kedosha, holy community, as one that creates pathways for everyone to be welcome in sacred spaces. She thanked the Zoom participants for their efforts in opening the door of community wider to “welcome everyone as their authentic selves because that’s the only way that, I believe, we really approach God.”

Rom was asked to speak by BT congregant Linda Steiner, who had heard Rom’s talk at a Habonim alumni meeting last year. The presentation was geared to older people, like Rom herself, who is 63.

She defined sexuality, and explained several terms, including lesbian (a female attracted to another female), heterosexual (females attracted to males and vice versa), bisexual (someone attracted to both males and females) and pansexual (someone attracted simply to the person, irrespective of gender). She broke down the acronym LGBTQ+ (lesbian, gay, bisexual, transgender, queer; with the plus including but not limited to asexual, two spirit, and allies). She also went through some of the gender terminology, such as cisgender (“either male or female”) and transgender (someone whose sense of self doesn’t match their birth gender). She spoke briefly about hormone therapy and gender reassignment surgery.

For people wanting to start learning more about gender and sexuality, Rom suggested the books Love Lives Here by Amanda Jette Knox and Transgender Children and Youth: Cultivating Pride and Joy with Families in Transition by Elijah Nealy, the Israeli documentary Family in Transition and the narrative film The Danish Girl (or the book from which it was adapted, written by David Ebershoff).

Dean Kaplan, 28, who goes by the pronouns they, them and their, came out as non-binary a couple of years ago. They spoke about how they see themselves and their relationship to how the world sees people like them. Describing themselves as Jewish, white and having grown up upper-middle-class and with privilege, Kaplan acknowledged that these factors have “contributed to me being able to live as myself comfortably.”

Despite that comfort, Kaplan first came out as queer in terms of their sexuality, at the age of 17 or 18, before identifying as gender-nonconforming.

“An important part of identifying as queer in almost any part of the world,” said Kaplan, “is not only understanding who you are, but also, in some ways, accepting this label as ‘deviant’ by society.”

In their early 20s, Kaplan began to realize “I very much enjoy connecting with parts of myself that would be considered feminine,” such as having longer hair and wearing tights.

From a young age, they said, “I’ve had this latent sense of difference in how I want to emotionally connect with people and that played a lot into my sense that I was gender-nonconforming. I think also a little bit of it is this sense that I want to live in a world and exist in space without a lot the negative aspects of masculinity that I was raised to cherish in a lot of ways. I’m still aware of the fact that almost all of my male friends are embarrassed to cry, even alone; it’s a sign of anti-masculinity. And so, being non-binary for me is very freeing in a lot of ways. I can be who I want to be and who I feel I am without the kind of embarrassment or labels that go with certain actions for certain genders.”

That said, the reactions to their coming out were mixed and some were hurtful. They get misgendered every day – “sometimes I correct, sometimes I don’t,” said Kaplan. That will depend, for example, on whether the person making the mistake is a superior at work or a peer. “Power and economics play into my ability to be myself in the spaces I happen to be in,” they said.

Jason Abelson, 24, started his transition in 2012, but his first memory of wanting to be a boy goes back to a gymnastics class when he was in preschool, so 4 or 5 years old. Initially, he attended an Orthodox elementary school in South Africa, where he was born, but his parents switched him to a public school. He used the fact that he was a swimmer to cut his hair short in Grade 4. He hated it when his parents would correct people who would mistake him for being a boy. “I just wanted to go and hide somewhere,” he said.

When his chest began to develop in puberty, he would try and hide it, but, eventually, he quit swimming. He has since picked the sport up again, and has joined an LGBTQ+ team.

When he was younger, he said, “I didn’t know what transgender was. I didn’t know that you could transition, that the feelings I had for wanting to be a boy were experienced by anyone else until an Oprah show that my mom was watching one summer’s afternoon. In that Oprah show, they had a transgender guy and his family, and shared his story.”

Seeing the possibilities for himself, Abelson thought about next steps and started the process of transitioning, one part of which is convincing a psychologist “that you are transgender.” He then saw an endocrinologist. In Grade 10 at the time, he stayed at the same school throughout. “I finished the first semester as a girl; came back five days later as a boy,” he said. “All we did was we changed the name on the class list.”

While he was given a key to the teacher’s washroom, he didn’t want to call attention to himself, so he avoided using the facilities. “Bathrooms still do give me a little bit of anxiety,” he said.

He started hormones nine years ago, at age 15. About a year after that, he had top surgery – prior to that he had used binders to keep his chest down.

With respect to going to an Orthodox shul after he started his transition, Abelson was told that he could come to services but would have to sit in the women’s section. Even now, attending a new synagogue and sitting on the men’s side, he said, “I don’t feel like I have a place in the shul. Being gay as well, I can’t get married in that shul, so that’s still a world that is being navigated.”

Kay Abelson spoke about both the emotional journey and the “very practical life journey.” She said she struggled with those early years when her son was asserting his identity – in his clothing choices and in his desire to cut his hair short, for example.

“I found it really hard, as a mother,” she acknowledged. “And it did cause some conflict in our family.” However, she noted, “For me, the time before Jason’s transition was more of a struggle than once he transitioned…. I found the earlier time hard, before we knew what we were dealing with. Bernard and I both always had a sense that there was something with Jason when he was growing up, but we just could not put our finger on it. And so, that moment of him watching the Oprah show and having that ah-ha moment was a huge turning point for all of us.”

It took time for her and her husband to understand and digest what was happening. She had fears about what people would think and say, but people were supportive and accepting, she said.

“When you start thinking about the history and the background about all those situations that Jason mentioned,” said Bernard Abelson, such as the first time he cut his hair short. “All I wanted to do was get him earrings so that he could look more feminine.” When people would refer to his son, “I was immediately defending, ‘This is my daughter.’… I thought I was

defending him. That’s the irony of all that, is that, as a parent, you think you’re doing the right thing by

defending them … but, at the end of the day, for him, as you’ve heard, it wasn’t working for him at all.”

One thing that helped the family was watching the documentary Becoming Chaz, about Chaz Bono’s transition. Watching it helped Bernard Abelson to accept, “This is real.”

“It’s been an incredible, incredible journey for all of us,” said Kate Abelson.

While some parents go through a mourning period for the son or daughter they once had, Kay Abelson said, “I never felt like I lost anything. In fact, I actually gained something through the process because, before Jason’s transition, as you heard in his story, he never felt comfortable with who he was. He was always yearning to be someone different, so he was never really happy within himself…. When he transitioned and he could actually stand loud and proud and be who he was … it was just so exciting.”

Rom reentered the conversation by stressing that the level of grieving varies among families. She then opened the question-and-answer session that included Dean Kaplan’s dad, Des Kaplan, talking about some of his challenges in understanding his child’s gender and sexuality. There was also discussion about Jewish tradition, which identifies at least six genders, and that some Jewish communities have changed the b’nai mitzvah rituals to be more gender-inclusive.

To watch the panel discussion, without the Q&A, visit btikvah.ca/inclusion-and-diversity.