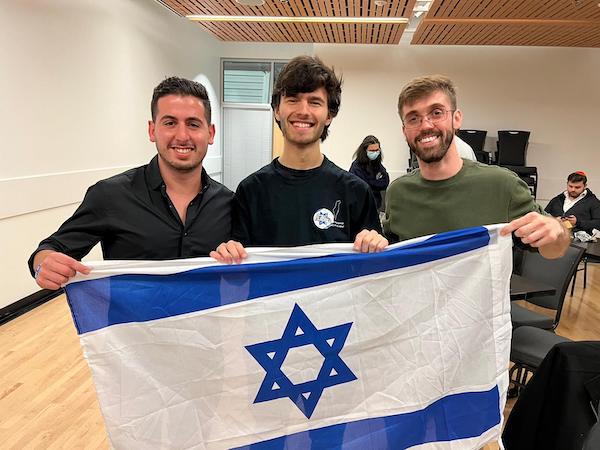 On Nov. 24, Chabad UBC invited two former Israel Defence Forces soldiers to the Nest on the University of British Columbia campus to speak about their personal stories and life lessons from serving in the army.

Amit Shmuel, a former soldier in the elite Palchan unit, and Matan Roettger, a former soldier in the Kfir Brigade, shared some of their experiences in service; stories of their courage and the sacrifice they made protecting and defending the state of Israel, and especially of their perseverance in the face of suffering and adversity. Both suffered career-ending injuries in the line of duty, and their strength and resilience to mentally and physically recover from their trauma were remarkable.

The two soldiers were at UBC as part of a larger tour of college campuses all across North America, along with Belev Echad, an organization dedicated to providing financial and moral support to IDF veterans wounded in action and to easing their transition back into civilian life.

The local event was sponsored by Hasbara Fellowships, which helps train young student leaders to become Israel ambassadors and activists on campus. As a Hasbara Fellow myself and having firsthand experience in Israel, I found the stories of Shmuel and Roettger to accurately represent the victory of hope over despair, the value of the sanctity of life, freedom and dignity that have been deeply encoded in the fabric of Israeli society and the Jewish community worldwide.

Just as the Maccabees 2,000 years ago rededicated the Second Temple from destruction to restoration, so too did these two modern-day Maccabees rededicate their lives from tragedy to triumph. They inspire us to not focus on what we cannot control, but rather on what we can: to elevate our attitude and response toward life’s misfortunes by sharing with others our light of faith and hope for a brighter future.

Eitan Feiger is a student at the University of British Columbia, class of 2024.