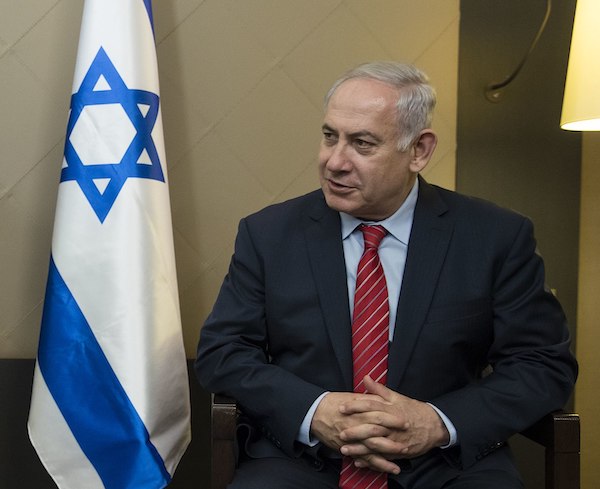 During coalition building negotiations, Binyamin Netanyahu had to consider lists of demands that would make even the pious cringe. (photo from president.gov.ua)

So, my mom doesn’t have to worry about me anymore. Ever since I moved to Israel, she’s been concerned about my safety. Well, Israel is now one of the five safest countries in the world to visit, according to Swiftest, an American travel insurance website. From homicide rates to natural disasters to rode carnage, Israel rounds out the top five safest places, just after Singapore, Denmark, the Netherlands and Switzerland. The most dangerous country to visit is South Africa. Canada was ranked the 21st safest country, so now I’ll have to start worrying about my mom’s safety. Just sayin’.

During coalition building negotiations, United Torah Judaism (UTJ) – holding seven seats Binyamin Netanyahu required to build his government – presented a list of demands that would make even the pious cringe. This included affirmative action for ultra-Orthodox job seekers in state-owned companies. More religious studies in secular schools. Less secular studies in religious schools, like science, arithmetic and English. More gender segregated beaches. (How often do the Orthodox go to the beach? Do they need additional beachfront real estate?) Legislation permitting yeshivah students to continue Torah studies and defer army service. And, are you ready for this? A demand to stop energy generation on Shabbat. Does this reek of theocracy-building or what? And it costs the Israeli taxpayer – about which the UTJ constituency knows little – about nine billion bucks a year!

Not to be outdone in chutzpah, Religious Zionist Member of the Knesset Orit Struk is reportedly a strong advocate of a government amendment enabling private businesses to refuse to provide services based on religious beliefs. But only if the same “widget” is available elsewhere at similar terms. Good thing she clarified that. Seriously! So a business owner can now deny selling to people of colour, to LGBTQ+ people, to Arabs and to others, Jews and non-Jews. If it’s justified by religious beliefs and becomes even more outlandish. Doctors could also decide who to operate on. Yes, bearers of the “hypocritic” oath: “I’m not operating on that guy. He’s homosexual.” OMG!

I’m not just sayin’, I’m shoutin’! Bring in some sanity!

Speaking of the Haridim, according to a new research study from the Hebrew University, Philip Morris spent more than $1 million on advertising to attract the ultra-Orthodox. Now what makes this demographic so influenced by cigarette advertising? Is this related to that sector’s education, or lack thereof, in the sciences and the deadly impact tobacco products have on health? Maybe the incoming government should introduce more secular education in the religious schools. Make Israel a more educated and healthier country.

And talking about education – in a survey by the education platform Erudera, Israel is the fifth most educated country in the world. More than 50% of Israelis hold a higher education degree. This despite Rabbi Yitzchak Godknofp, the United Torah Judaism’s party chairman, claiming that math and English studies have no effect on Israel’s economy in his lame attempt to defend these core subjects not being taught in Orthodox schools. Really, no effect?!

By the way, Canada was in top spot, with almost 60% of Canucks holding a tertiary degree. And in Canada all schools teach the three Rs.

Tel Aviv made the UBS Global Real Estate 2022 Bubble list, being in the top 10 cities with a severe housing bubble. Given Tel Aviv’s 2021 rank as the most expensive city, according to The Economist magazine and my wallet, this is really no surprise. To wit, housing prices increased threefold between 2001 and 2017. And, during 2022, climbed another 18%. This bubble was not only in Tel Aviv but throughout our tiny shtetl. Also included in the list of top 10 severe housing bubble cities are Toronto and Vancouver; Winnipeg – my home city – is not on the list.

Towards the end of 2022, Tel Aviv fortunately lost its place as the world’s most expensive city. It moved to third place, behind Singapore and New York. Coming in last were Damascus, Syria, and Tripoli, Libya. All things considered, I’d rather be living in one of the most expensive cities.

Not all is bleak. According to The Economist, Israel was the fourth best performing economy within the OECD during 2022. Metrics included GDP growth rate, annual inflation and share prices. Greece ranked first, the U.S. ranked 20th and Germany 30th. As a top world economy, shouldn’t prices be more reasonable in Tel Aviv? Just askin’.

Somewhat belated happy Hanukkah thoughts. Sufganiyot – Israeli jelly-filled donuts doused in oil – shouted out from every bread counter in the country. It made me more whimsical and homesick for the donuts of my Canadian youth, Tim Hortons – Tim Hortons bakes ’em. I’m all for celebrating the Maccabees’ triumph over the Syrian-Greek Seleucids’ empire in Judea – yes, Hanukkah is mainly about victory – and their eight-day oil-based menorah-lighting miracle. Just didn’t want my sufganiyot tasting like they had been sitting in oil for eight days. Just sayin’. Belated wishes for a happy Gregorian new year.

Bruce Brown is a Canadian and an Israeli. He made aliyah … a long time ago. He works in Israel’s high-tech sector by day and, in spurts, is a somewhat inspired writer by night. Brown is the winner of the 2019 AJPA Rockower Award for excellence in writing, and wrote the 1998 satire An Israeli is…. Brown reflects on life in Israel – political, social, economic and personal.