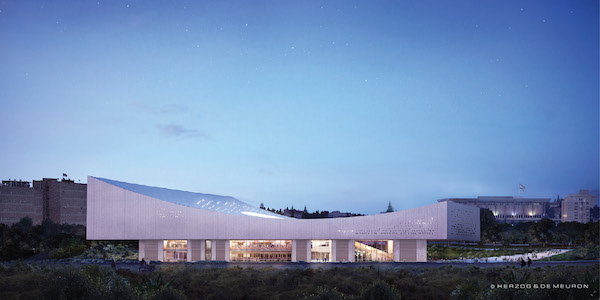 Come March, and in advance of Israel’s 75th Independence Day, the People of the Book will have an iconic shrine worthy of their literary legacy, promises Oren Weinberg, the chief executive officer of the National Library of Israel, making him the chief librarian of the Jewish people.

All of the NLI’s collection of more than 6,000,000 rare volumes, manuscripts, incunabula, books and miscellaneous printed material has been transferred from the current building on the Hebrew University of Jerusalem’s Givat Ram campus. Their new home, 500 metres distant, is the 45,000-square-metre venue located at the northwest corner of Ruppin Road and Kaplan Boulevard in the Ben-Gurion government precinct, between the Knesset and the Israel Museum.

“Construction of the new National Library of Israel complex is nearing completion,” Weinberg told a recent press conference. “Over the past year, the new building has emerged as a stunning addition to the Jerusalem cityscape, already recognized as a major Jerusalem landmark.

“The building reflects the library’s transformative renewal from the secluded environment of a university campus to a stunning physical manifestation of our central value: opening access to the National Library of Israel’s treasures to broad and diverse audiences from Israel and around the world.”

Weinberg told a recent explanatory session for the NLI’s core group of readers and researchers that, while boxing, moving and unpacking 33,000 books daily is a daunting logistical challenge, he and his team are proud they were able to do so without disrupting service to the institution’s many thousands of daily readers. The transfer of the books was finished in December. Now, a high-tech array is protecting the invaluable collection from fire, water damage and theft. Apart from reference material, most of the books are housed in the four basement levels. The six floors above ground serve the public.

With palpable excitement, Weinberg displayed photos of the construction progress of his $200 million baby, now in its final phase, funded by the Rothschild family’s Yad Hanadiv and the Gottesman Fund of New York.

The NLI was designed by the Basel architect firm Herzog & de Meuron. If that name is familiar, it’s because the Swiss architects are renowned for their bird nest stadium that graced Beijing’s 2008 Olympics. Their Jerusalem library is certain to be an equally recognizable instant landmark. Located on an irregular plot, the architects designed a modern interpretation of a triangular flatiron building surrounded by a lush garden.

Like its predecessor, which opened in 1960 and is named after its patron, Lady Davis of Montreal, the new building will be primarily a close-stack facility. It, too, will have a spiral staircase. But the comparison ends there. With a glass oculus – calling it a skylight would be too modest – and a swooping roof that would be a skateboarder’s delight, the distinctive library will be incomparably more multi-purpose than the current facility. Besides the greatly expanded and dramatic three-level reading room, it will encompass an auditorium, display areas, lockers, commercial space, a restaurant, synagogue and underground parking. In the future, it will be served by a nearby light rail station.

The multi-purpose research centre and venue for cultural and educational activities will also be a place to drink coffee and socialize, Weinberg said.

Founded in 1892, the NLI today is the repository of the world’s largest collection of Judaica and Hebraica. It collects everything related to the state of Israel, and contextualizes that core with general books on the humanities, Islam, the Middle East, religion and antisemitica.

Among its rare treasures are the Damascus Crown, a 13th-century Hebrew Bible smuggled out of Syria 29 years ago in a Mossad operation so hush-hush that the manuscript’s existence in Israel was kept secret for decades. Another priceless volume is a commentary on the Mishnah handwritten by the medieval Jewish philosopher Maimonides.

Sir Isaac Newton’s manuscripts about theology and the apocalypse, including his notations in cursive English and Hebrew, have a home at the NLI. Newton predicted the end of the world will come in 2060. That should leave readers at least 37 years to savour the new building.

More recent is Czech novelist Franz Kafka’s notebook, wherein he recorded Hebrew words and their German meaning in advance of his unfulfilled dream of settling in Jerusalem.

The NLI continues with its mission of collecting, preserving and providing access to the cultural treasures of the state of Israel and the Jewish Diaspora. For example, in a complex deal in 2017, the library acquired 80% of the 10,000-volume Valmadonna Trust Library – the largest private collection of Hebrew books and manuscripts in the world. Included were a rare 1491 Chumash (Torah in book-bound form) from Lisbon and one of only two surviving copies of a 1556 Passover Haggadah from Prague, a siddur (prayer book) from Venice dated 1459 written on klaf (parchment) and a Hebrew Bible handwritten in England in 1189 – the only dated Hebrew text before the expulsion of Jews from England in 1290 by King Edward I.

In keeping with NLI policy, the price paid for the Valmadonna Trust Library collection was not released. Selections from it will be on view to the public in March, when the new NLI opens.

Like books, space can also be a precious commodity. With desks for only 600 readers, the Givat Ram structure is today obsolete. The new building will have more than double that number. Each reader will enjoy a 1.25-metre-long desk and each space will be equipped with its own reading lamp.

While computers will be readily available both at desks and to borrow – during a recent visit to the Lady Davis building, I had to scavenge a mouse to access the catalogue – it is anticipated that most readers will be bringing their own notebooks, said Weinberg. That fact indicates the NLI’s forward-looking vision whereby ever more materials will be digitized as the preservation of knowledge evolves.

What of Mordecai Ardon’s triptych depicting the Prophet Isaiah’s vision of messianic peace, which was installed in 1984 opposite the old building’s main stairwell? The stained glass vitrine, like the old building, will be in limbo – an empty white elephant waiting to be repurposed.

Gish Amit’s 2014 book Ex-Libris: Chronicles of Theft, Preservation and Appropriating at the Jewish National Library, published by the Van Leer Jerusalem Institute, tells the extraordinary story of how three collections came to the NLI.

Following the Second World War, the Diaspora Treasures project brought to Jerusalem hundreds of thousands of books once owned by now-murdered Jews whose belongings had been looted by the Nazis.

During Israel’s 1948-49 War of Independence, 30,000 Arabic-language books that were owned by Palestinian refugees were collected. They are cataloged “A.P.” – abandoned property – and await a peace treaty so that they may be turned over to the future National Library of Palestine.

Lastly, there was the gathering of books and manuscripts from the 49,000 Yemenite Jews who were rescued and brought to the nascent state in 1949 and 1950 in Operation On Wings of Eagles. Their property was systematically looted as part of Israel’s claim to ownership of the country’s Jewish past, as well as its pre-Zionist past. Amit documents that only a small number of those books were ever returned to their rightful owners.

Noted Jewish Canadian philanthropist Henriette Marie Meyer (1872-1963) was born in San Francisco. She moved to Montreal in 1898 to marry businessman and philanthropist Mortimer Davis, and became known as Lady Davis after her husband was knighted by King George V in 1917.

The couple divorced in 1924 and Lady Davis moved to Paris, where she continued her philanthropic activities, including founding a resort for children with disabilities, called the Colonie de vacance. For her actions, she was made an officer of the Legion d’honneur.

With the outbreak of the Second World War, Davis fled to Montreal, where she donated a Spitfire plane to the Royal Air Force and provided lodging for RAF pilots. For her contributions, she was made Commander of the Order of the British Empire.

In 1945, she founded the Lady Davis Fund, which helped bring Holocaust survivors to Canada. She is best known in Canada for the Lady Davis Institute for Medical Research at Montreal’s Jewish General Hospital.

In addition to the National Library of Israel, she also donated funds to build the Mechanical and Aeronautical Engineering Centre at the Technion, and the Lady Davis Carmel Medical Centre, both in Haifa.