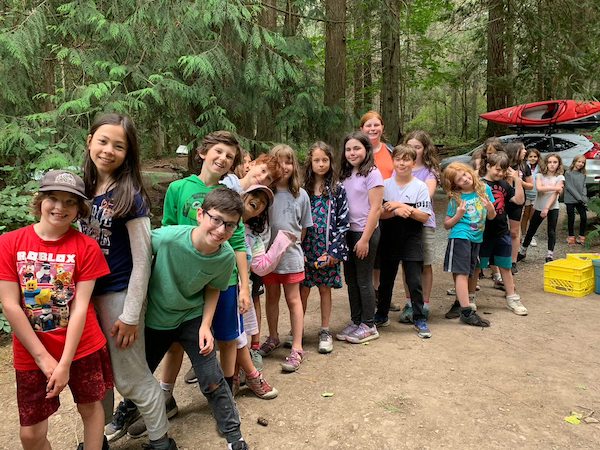 Generations of kids have “the best summer of their lives” at camp. (photo from Camp Miriam)

“There’s no way we are going to a Jewish camp,” my kids declared with absolute resolve. Wait. What? Why??? They explained that they knew “enough” Jewish people and plenty of culturally Jewish things, so camp was not necessary. OK, I thought, that’s completely, totally and utterly crazy.

While we’ve been involved at Temple Sholom for years, speak Hebrew at home and celebrate the holidays, my kids are the only Jewish kids in their classes at public school. They are often told they don’t look Jewish, let alone Sephardi. Whatever that means – there’s a huge span between Barbra Streisand and Ofra Haza. They weren’t excited about their identity, but begrudgingly went along with being Jewish. It was the equivalent of cultural, ethnic and faith feet dragging.

My disappointment couldn’t be missed because I literally said, “I’m so disappointed to hear you say that.” I thought guilt might move them – a powerful tool of every Jewish mother. They apologized. Yes. I was moving the needle. And then, they immediately asked me if they could go to a Christian horse camp. Nope. I failed, while concurrently being mortified. To be clear, I wasn’t horrified of considering a different faith camp, but because they are wildly allergic to horses. Who wants to be the parent that gets a phone call that their kids can’t handle equines? Not me. Too embarrassing.

Moreover, it was a complete reversal of my experience. I begged my parents to send me to a Jewish camp. I started going from the age of 10, eventually visiting Israel and managing to get a coveted staff position. My camp time was the most incredible and defining experience of my youth. I wished, hoped and prayed for my kids to have the same experience. They had shut down the idea, but before I wrote them off as blasphemers, I decided to let it sit and cook in their minds like a delicious shakshuka.

For a couple of months, they pondered a tough year of COVID-19 shutting down so much of life – and the idea of being away for several weeks with a lot of independence became very appealing. They finally agreed to “let me send them” to Camp Miriam, which was very similar to the camp I went to back east. They diligently packed, were welcomed by friends at registration, got on the bus and did not look back. I got two postcards. The first informed me that they hadn’t been eaten by wild island dogs, and the second told me they were having the best summer of their lives.

The kids came back transformed both physically and figuratively. They both grew half a foot, and something in their psyche profoundly shifted. They loved, I do mean loved, all things Jewish because of Camp Miriam. They had a magical summer that every parent wishes their kid to have. A tight group of friends, a deep respect for their beloved staff and a passion for the programming. Frankly, they wouldn’t zip it about how much they adored Camp Miriam.

They bragged about doing avodah (work), one choosing garbage duty and the other cleaning the sherutim (bathrooms). Umm … what happened? I couldn’t get them to make their beds at home, and they were doing legitimate work at camp? It struck me. Camp Miriam had instilled a profound sense of pride. For weeks, and I do mean weeks, they would prompt a conversation with, “At Camp Miriam….” Some of their most profound moments were having Shabbat at the Point, feeling a deep connection of chevra (community) and telling me they felt understood for the first time. They didn’t have to explain themselves, and that was mind-blowing.

Going to Camp Miriam coalesced for my kids a sense of identity; they felt seen and heard, so could go deep into what this meant. We were able to have a shared generational experience, which was pretty awesome, considering my kids think electricity was barely invented when I was a kid. I corrected them and explained that the cutting-edge technology of faxing existed when I was a child.

Last week, I overheard them at Sunday Temple Sholom school bragging that Camp Miriam was the best camp ever. And there it is. My kids not only needed Jewish camp, but they also desperately wanted to be there. I feel utterly indebted to Camp Miriam for giving my kids such a brilliant and rich Jewish experience and, although I couldn’t say it to their faces, I was satisfied thinking, “Yes! In your faces. You suck. I was soooooo right about everything, and you were so unequivocally wrong.” Also, now I can breathe easy, knowing they can’t wait to go back to Camp Miriam and build a lifetime of memories and friendships.