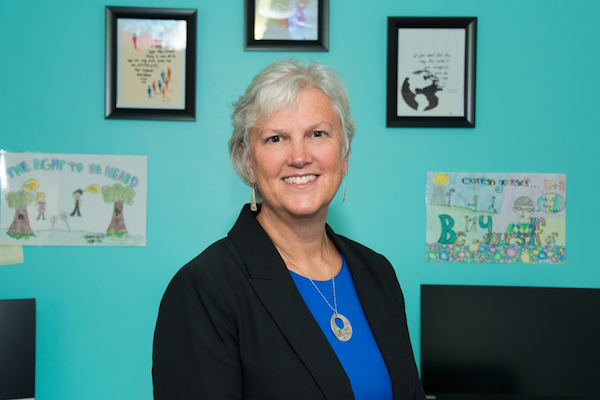 The University of British Columbia’s faculty of education presented the Dean’s Distinguished Lecture and the Janusz Korczak Medal for Children’s Rights Advocacy on Jan. 27, International Holocaust Remembrance Day. Dr. Jennifer Charlesworth, British Columbia’s special representative for children and youth, gave the talk and the medal was awarded to Dr. Kimberly Schonert-Reichl, an applied development psychologist at the University of Illinois, Chicago.

Born Henryk Goldszmidt, Janusz Korczak (1878-1942) was a Polish-Jewish pediatrician, journalist and educator. His advocacy for children is still recognized today through his writings, which served as a basis of the United Nations Convention on the Rights of the Child.

Prior to the Second World War, Korczak was the director of an orphanage in Warsaw. Although he was offered freedom during the Holocaust, he chose to stay with his orphans when they were forced to board a train to the Treblinka extermination camp in 1942. He, members of his staff and more than 200 children were murdered.

Korczak considered children as partners, equal to adults, insisting that there are no human rights without children’s rights. His pioneering work and enduring legacy were felt throughout the recent event. In the words of B.C. Lt.-Gov. Janet Austen, who introduced the main speaker, “Korczak was an extraordinary man who reimagined the relationship between children and adults. A man of great personal courage and a revolutionary thinker, he understood, whoever saves one child, saves the whole world.”

Charlesworth began her talk on Korczak’s connection to the contemporary era by encouraging the Zoom audience to “think of how far ahead of his times Korczak was in suggesting that each child must be respected. He was rejecting the ideas of his time. His commitment to children is awe-inspiring.”

According to Charlesworth, the first indisputable right of a child is to articulate their own thoughts. Those working with children need to nurture the capacity to listen and understand, to be curious and receptive. Further, practitioners have “to place child’s rights at the centre of their practice, to have both ears open to a child’s voice.” Too often, she said, the individual voices of children can be lost in operational systems.

Charlesworth spoke about advocacy and highlighted the fact that those who work with children will have a significant impact on their lives. Korczak’s advocacy for children, she said, “set the bar very high.”

Adults should want to help children realize their potential, and the relationship between adults and children should never result in the appearance of a struggle for rights. Charlesworth emphasized that, without prioritizing youth voices, there would be no Greta Thunberg, the Swedish environmental activist, or Katherine McParland, co-founder of the B.C. Coalition to End Youth Homelessness.

“We are living in a time of great change and uncertainty. Children and youth sense this, too, and we stand to learn a lot from them as well,” Charlesworth said.

Writer and child survivor Lillian Boraks-Nemetz, a board member of the Janusz Korczak Association of Canada (JKAC), which partnered on the event, drew further on the prescience of Korczak’s work and its continued importance. “Today’s children do not have the same sense of normalcy and routine as before COVID-19,” she said. “At times like these, my thoughts turn to Korczak and a child’s right to education, respect and love.”

Afterwards, JKAC president Jerry Nussbaum and Charlesworth presented this year’s award to Schonert-Reichl, an expert on social and emotional learning, whose nearly four-decade career has been dedicated to children’s rights and well-being. Formerly an educator in British Columbia, she was at the forefront of the province’s revitalized education curriculum, which is often heralded internationally for its advancements in social and emotional learning.

“I am so honoured,” she said upon receiving the award. “And to be in a group where so many are advocating for children’s rights.”

The evening also saw the giving of the Janusz Korczak Graduate Scholarship in Children’s Rights and Indigenous Education to Cayley Burton, a third-year master of arts student in early childhood education at UBC and an instructor in the Indigenous Early Childhood Education Program at Native Education College. Her thesis delves into gender-inclusive teaching practices for preschool children through LGBTQ+ picture books.

“It’s an inspiring, overwhelming honour to have Dr. Korczak’s name associated with the advocacy work that I do alongside and on behalf of young children who are marginalized in Canada,” Burton said.