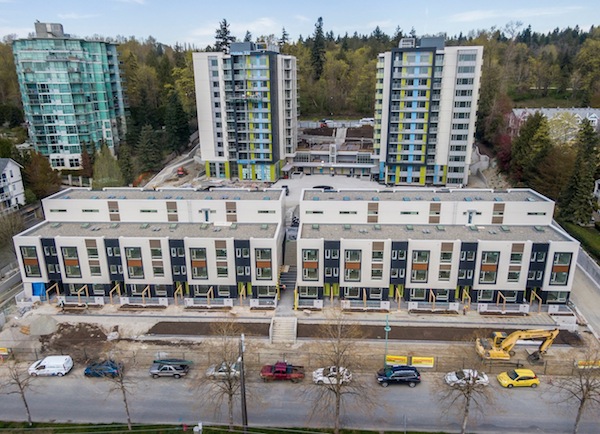 The first tenants at the Ben and Esther Dayson Residences started moving into their new homes in late August. Managed by Tikva Housing, the 32 townhomes are located west of the River District, on East Kent Avenue North, a block from Riverfront Park.

A part of the Vancouver Land Trust project, the residences share a number of amenities, such as green space and a playground. Rent will be targeted to approximately 30% of gross household income to a rent maximum. Tenants are expected to pay for hydro, phone, internet and contents insurance.

Anat Gogo, Tikva Housing’s manager of programs and donor relations, expressed her enthusiasm upon the launch. “I feel so excited for the community,” she said. “It will be a concentrated Jewish community. When you build neighbourhoods, you build community.

“The residences will also provide a home for essential workers, such as teachers, in our community,” she added.

The strong need for affordable housing in the region has been a prevalent concern for many years. A 2011 survey of the Greater Vancouver Jewish community identified more than 4,000 people (or 16% of the total community) who were low-income; the number included 600 children and 550 single-parent families.

To many local renters, Vancouver holds the unenviable distinctions of having the highest rents and the lowest vacancy rates in the country. At the start of the year, the rent for an average one-bedroom apartment in the city was more than $1,500 per month, while vacancy levels hovered around one percent.

Tikva Housing helps those who would be deemed “working poor” and cites the limited “life options” available to them in this expensive city. For example, to a person earning $2,000 a month, the affordable level for their rent should be a maximum of $600 per month. For the past decade especially, rents in the Lower Mainland have risen far beyond that level – thus leaving little money to set aside for food, medicine, utilities, transport or education to improve job skills.

“They save people from being on the streets. They save people from unsafe situations,” said Steve, a tenant at Tikva Housing’s Diamond Residences in Richmond. “It’s given me security. I don’t have to worry about making rent. It’s affordable. I buy our groceries. It puts me in a wonderful frame of mind. It allows me to be a good father. Without Tivka, I would not have been able to give proper care to my children.”

Tikva Housing’s stated mission is to provide a safe, stable and affordable home to every Jewish person in Metro Vancouver who needs one. Its services are geared primarily at low- and moderate-income adults and families.

It also operates the 11-unit Dany Guincher House apartments in Marpole and the 18-unit Diamond Residences cited above. Opening in early 2021 is the Arbutus Centre on the West Side – as part of a partnership with the City of Vancouver, the YWCA and the Association of Neighbourhood Houses of British Columbia – which will bring another 18 studios and 19 one-bedroom units to low- and moderate-income members of the community.

As might be expected, the number of people turning to Tikva Housing has increased during the COVID-19 pandemic. In July alone, it approved a record number of eight recipients for the Tikva Housing Rent Subsidy Program.

“The subsidy allocation for the past five months amounted to just shy of $27,000 in addition to the existing allocations, and the need continues to grow,” Gogo said.

In August, Alice Sundberg, Tikva’s director of operations and housing, announced, “I am in conversation with a few private developers and nonprofit housing providers regarding potential projects in Vancouver, Burnaby, Richmond and Surrey. I can’t say more about these opportunities at this time.”

Ben Dayson was a prominent figure in Vancouver and Richmond real estate and a philanthropist. Together with his wife Esther, they worked to help many charitable causes. Helping those in need find affordable housing was one of their primary objectives, through funds provided by the Ben and Esther Dayson Charitable Foundation.

“Our family is focused on providing funding to areas of basic needs,” said their daughter, Shirley Barnett. “Obviously, housing is one of these areas we choose to support. As my parents, Ben and Esther Dayson, were in real estate development, it seemed natural to fund a complex such as this in their memory.”

For more about the Tikva Housing Society, visit tikvahousing.org.