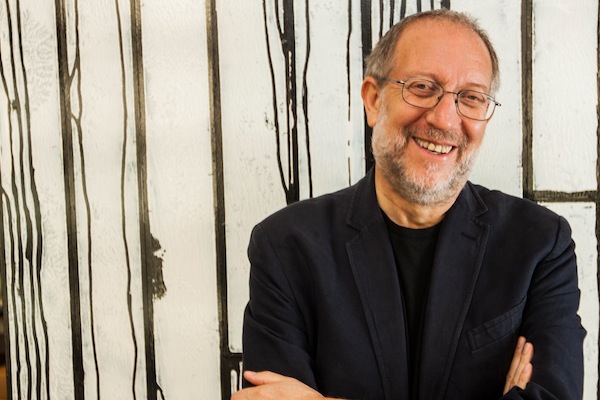 Yossi Klein Halevi’s Letters to My Palestinian Neighbour is recently out in paperback. (photo by Ilir Bajraktari / The Tower)

Yossi Klein Halevi grew up in the right-wing Zionist youth movement Betar, the ideological stream of Ze’ev Jabotinsky and Menachem Begin. As a youth, he wore a silver outline of the land of Israel “as we understood it” that included not only the West Bank but also the area that became the kingdom of Jordan, which the British had severed from historic Palestine. As he’s aged, he’s emphatically mellowed.

His book Letters to My Palestinian Neighbour, recently out in paperback, is, he writes, “an attempt to explain the Jewish story and the significance of Israel in Jewish identity to Palestinians who are my next-door neighbours.”

He lives in the French Hill neighbourhood of Jerusalem and repeatedly throughout the book reflects on how he is face-to-face with the division between their places. 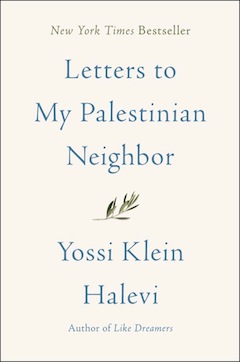 “From my apartment, I can just barely see the checkpoint you must cross – if you have a permit at all – to enter Jerusalem.” He talks about when, “before the wall was built, before so much else that went wrong, I tried to get to know you.”

In 1998, he set out on a pilgrimage into Islam and Christianity, a religious Jew “seeking not so much to understand your theology as to experience something of your devotional life. I wanted to learn how you pray, how you encounter God in your most intimate moments.”

During those comparatively placid times, he recalls, Israelis made little effort to accommodate their neighbours.

“For many years we in Israel ignored you, treated you as invisible, transparent. Just as the Arab world denied the right of the Jews to define themselves as a people deserving national sovereignty, so we denied the Palestinians the right to define themselves as a distinct people within the Arab nation, and likewise deserving national sovereignty. To solve our conflict, we must recognize not only each other’s right to self-determination but also each side’s right to self-definition.”

Klein Halevi made aliyah from the United States in 1982. Now a senior fellow of the Shalom Hartman Institute – “Israel’s preeminent centre for pluralistic Jewish research and education” – he co-directs the institute’s Muslim Leadership Initiative, is the author of numerous books and is a prolific commentator and former contributing editor of the New Republic. He has made the book’s Arabic translation available to download for free.

He argues that each side must be allowed to define themselves.

“So who are the Jews? A religion? A people? An ethnicity? A race?… That question impacts directly on our conflict. It goes to the heart of the Arab world’s rejection of Israel’s legitimacy as the nation-state of the Jewish people,” Klein Halevi writes. “Even Palestinian moderates I’ve known who want to end the bloodshed tend to deny that the Jews are an authentic nation. So long as Palestinian leaders insist on defining the Jews as a religion rather than allowing us to define ourselves as we have since ancient times – as a people with a particular faith – then Israel will continue to be seen as illegitimate, its existence an open question.”

He acknowledges that the problem occurs on both sides.

“Some Jews continue to try to ‘prove’ that Palestinian national identity is a fiction, that you are a contrived people. Of course you are – and so are we. All national identities are, by definition, contrived: at a certain point, groups of people determine that they share more in common than apart and invent themselves as a nation, with a common language, memory and evolving story. The emergence of a nation is an inherently subjective process.”

But he attempts to disabuse Palestinians and Arabic readers of the idea that Israel can be overcome.

“I’ve often heard from Palestinians that, just as the Ottoman Turks came here and left, and the British came here and left, so, too, will the Zionists one day leave. That analogy ignores Zionism’s singular achievement. None of those invaders founded a thriving society, let alone a sovereign state. They eventually went back to their own homelands. More than anything else, I need you to understand this: the Jews succeeded where the Crusaders and the Ottomans and the British failed because we didn’t merely come here. We returned.”

This sense of destiny is evocatively expressed when Klein Halevi writes about the War of Independence.

“Our side began the war with three tanks and four combat planes. And we were alone. That, as it turned out, was a crucial advantage, because desperation forced us to mobilize our entire society for a war of survival. If your side had prevailed, few if any Jews would have been left here. As a result, the Jews fought with such determination that only a handful of our communities fell. There was nowhere left to run; we’d reached the final shore of Jewish history.”

But the author makes an effort to acknowledge some of the harsh realities of that victory and the subsequent Israeli control of Palestinian areas and its effect on people. He recalls a moment during a call-up during his reserve service.

“A chubby teenage Palestinian boy, accused of stone throwing, was brought, blindfolded, into our tent camp. A group of soldiers from the border police unit gathered around. One said to him in Arabic: ‘Repeat after me: one order of hummus, one order of fava beans, I love the border police.’ The young man dutifully repeated the rhymed Arabic ditty. There was laughter.… That last story haunts me most of all. It is, seemingly, insignificant. The prisoner wasn’t physically abused; his captors, young soldiers under enormous strain, shared a joke. But that incident embodies for me the corruption of occupation. When my son was about to be drafted into the army I told him: there are times when as a soldier you may have to kill. But you are never permitted, under any circumstances, to humiliate another human being. That is a core Jewish principle.”

He acknowledges his pain over an eventual partition that would, for example, see the Jewish holy city of Hebron as part of an independent Palestine. But, he says: “The only solution worse than dividing this land into two states is creating one state that would devour itself. No two peoples who fought a 100-year existential war can share the intimate workings of government. The current conflict between us would pale beside the rage that would erupt when competing for the same means of power. The most likely model is the disintegration of Yugoslavia into warring ethnic and religious factions – perhaps even worse. A one-state solution would condemn us to a nightmare entwinement – and deprive us both of that which justice requires: self-determination, to be free peoples in our own sovereign homelands.… If Jaffa belongs to you and Hebron belongs to me, then we have two options. We can continue fighting for another 100 years, in the hope that one side or the other will prevail. Or we can accept the solution that has been on the table almost since the conflict began, and divide the land between us. In accepting partition we are not betraying our histories, neighbour; we are conceding that history has given us no real choice.”

Near the end, Klein Halevi reflects that some simple human goodness could have made a massive historic difference.

“Israel is a restless society of uprooted and re-rooted refugees and children of refugees, and the dark side of our vitality is a frankness that can easily become rudeness, the antithesis of Arab decorousness. Israelis often don’t know how to treat each other with respect, let alone those we are occupying. We are a people in a hurry to compensate for our lost centuries of nationhood, a people that doesn’t pay attention to niceties. Sometimes I think that, if only we’d known how to show your people simple respect, so much could have been different here.”

The new paperback edition includes an epilogue of “letters” in response to his neighbourly missives. Some, the author admits, are predictably harsh, dismissive and threatening. But many are long, thoughtful and inspiring. Klein Halevi has started a conversation. It is invigorating and heartily recommended to be a part of it as a reader.