Laurence Rees, former head of BBC TV History and author of the award-winning book Auschwitz, has written a very compelling and authoritative “new” history of the Holocaust, based on 25 years of research, and on many personal meetings with survivors and perpetrators – The Holocaust: A New History (Public Affairs, 2016).

The “new-ness” of Rees’ book is evidenced in the 100 pages of footnotes, which contain more than 100 references to “previously unpublished testimony,” plus new evidence from heretofore unrecorded diaries, speeches, stenographic reports, Wehrmacht soldiers’ letters, journals, private conversations and interviews. Add to this the results of “hundreds” of visits Rees made to exact killing locations, all of which have their first exposure here.

As with other great one-volume histories of the Holocaust, such as Martin Gilbert’s The Holocaust (1986) and Raul Hilberg’s The Destruction of the European Jews (1961), Rees’ history is difficult to read – not because of the writing (Rees’ prose is more engaging than either Gilbert’s or Hilberg’s) but because of what the reader has to face in reading about the Holocaust. The cold, impersonal, machine-efficient systematization of genocide; the brutality, the humiliation, the sadism and the ear-piercing silence of the church: all are offered here in unremitting detail. The silence of the world-at-large is also indicted here – as one survivor told Rees about her “liberation”: “What liberation? No one wanted us. There was no Israel, no England, no America and no Canada, with its wide open spaces.” 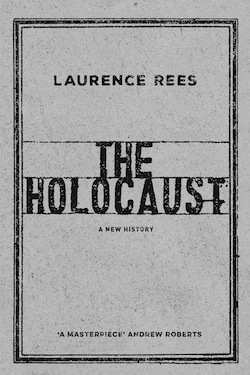 Rees lays his cards on the table in his prologue: “make no mistake about it – the Holocaust is the most infamous crime in the history of the world.” Rees’s words echo almost exactly the words of Winston Churchill in July of 1944.

To his credit, Rees sees through the usual “excuses” for the Judeocide – that is, need for “Lebensraum,” for “ridding of the world of a bacillus” or for the preventing of a Jewish plot for world domination. Rather, says Rees, the perversions which truly fueled the killing machinery were mad racism thoroughly laced with sadism and opportunity for profit.

On the usual controversial points: first, Rees agrees with Ian Kershaw that “No Hitler, No Holocaust”: no one who studies Holocaust history, he says, “can help but conclude that Hitler was primarily responsible for the Holocaust.” Second, Rees sides persuasively with the “functionalists” rather than the “intentionalists,” an old dilemma among historians of the period wrestling with the idea of whether the Judeocide was planned out in advance (“intentionalism”), or just came about piecemeal (“functionalism”). Third, as mentioned, Rees is adamant that the Holocaust was unique: “a crime of singular horror in the history of the human race.”

Rees is particularly, and rightly, harsh on the slavish complicity of the Dutch civil service (75% of the Dutch Jewish population perished) and the atrocious treatment of Jews in Vichy France, and bitterly condemns the hideously self-serving complicity of the Romanians in joining up with the German Nazis. But he saves his bitterest attack for the end of the book, vehemently accusing the Hungarians of a major crime for allowing what he rightly refers to as the “Hungarian Catastrophe.” (Nor does Canada escape indictment: Rees reminds us of Mackenzie King’s loud admiration of Hitler in the late ’30s, and of the antisemitic pronouncements of Canada’s Immigration Branch in 1938, preventing any Jewish immigration to Canada.)

Rees has some interesting insights on the “Danish Rescue” – the spiriting away to Sweden of almost all of Denmark’s Jewish citizens. Jews were thoroughly integrated into Danish society, and there had been a great number of intermarriages between Jews and non-Jews in Denmark. In never-before-published interviews, Rees offers heart-warming evidence of the bravery of Danish non-Jews in warning, hiding and planning passage for their Jewish neighbours. As a result, says Rees, when the Germans called, “most of the Danish Jews were not at home.” Rees offers “no simple explanation of why this happened in Denmark and nowhere else,” but he guesses that the Nazi functionary (Werner Best), known to have warned the Danish police about the upcoming “Action” in October of 1943, may have been motivated by the need to “avoid bad feeling” in a country that was supplying considerable food supplies to the Reich. No less of a motivating factor, Rees further conjectures, was the fact that Best, who had been appointed in his 20s to a judgeship, was intelligent enough to foresee the Nazis’ future defeat and subsequently “needed to start improving his CV as far as the Allies were concerned.”

Rees’ book reminds us, then, that history, ironically, is always “new” – and we are, therefore, reminded to constantly view it, and to re-view it, through ever-changing historical lenses.