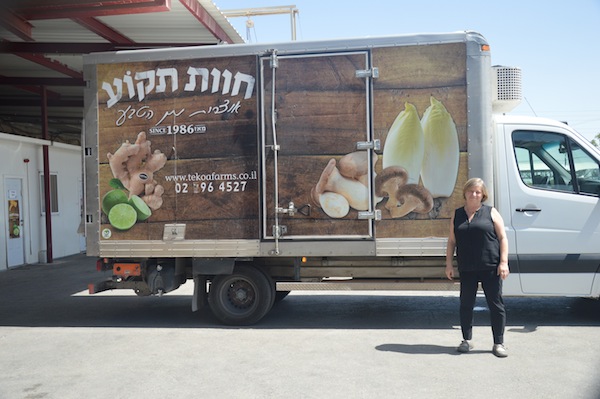 Mira Weigensberg and her husband, Oren Kessler, started Tekoa Farms in 1986. (photo by Barry A. Kaplan)

When Mira Weigensberg, who was born and raised in Montreal, and her husband, Oren Kessler, from Brooklyn, moved to Israel in 1979, she joined a research lab at Hadassah Hospital and came across research that caught her interest.

“Edible mushrooms had a potential effect on the immune system,” she explained in an interview at Tekoa Farms.

Tekoa is five miles south of Jerusalem, close to Herodium, the palace fortress and small town built by King Herod between 23 and 15 BCE. Tekoa was also the birthplace of the prophet Amos and, at the time of the Holy Temple, only olive oil produced in Tekoa was allowed in the service.

The Jewish community in Tekoa, which was established in 1978, is today a mixed religious and secular community comprised of approximately 3,000 people like Weigensberg and Kessler. The couple moved to Tekoa in 1983.

While working in the research lab, Weigensberg said to her husband, “Wouldn’t it be great if we could grow mushrooms at Tekoa?”

To learn more about the prospect, she went to the agriculture department of the Hebrew University and to Germany, while Kessler traveled to Holland.

“Ultimately, we scraped together enough money to start a mushroom farm, which began in 1986,” said Weigensberg.

Initially, they grew oyster and shiitake mushrooms, selling to chefs and specialty stores. In 1990, they started expanding their product range with items like lemongrass, asparagus, limes, snow peas, baby broccoli and baby artichokes. They have also added quick preparation goods, which only need hot water added.

“Every year, we try to add something new: a healthy product or mushroom-related or not easily available in Israel,” said Weigensberg.

Between production, sales and marketing, the farm currently employs 50 to 60 people.

The growing rooms are climate-controlled and, for example, in the room for oyster mushrooms, approximately a ton are grown on wheat straw. Other mushrooms grown and sold at Tekoa Farms include shiitake, king oyster, shimeji and shinoki.

In addition to the produce mentioned above, the farm’s vegetables and spices include ginger root, Belgian endive, red endive, turmeric root, shallots, Brussels sprouts and sundried tomatoes; fruits also include raspberries and blackberries.

Weigensberg said they are hoping to eventually have a visitor centre where people can come in for tours, but they are not set up for this now.