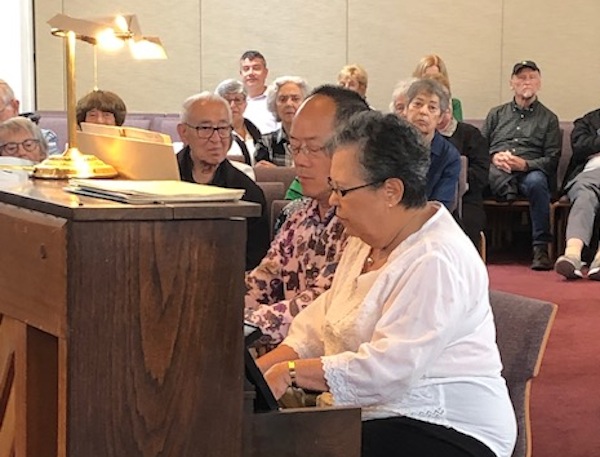 “Dueling pianists” Lester Soo and Marilyn Glazer entertain at the last Empowerment Series session of the season. (photo from JSA)

Co-sponsored by Jewish Seniors Alliance and the Kehila Society of Richmond, the fifth session of this season’s JSA Snider Foundation Empowerment Series took place at Congregation Beth Tikvah. It more than lived up to the series’ theme this year: “Renewing and Reinventing Ourselves.”

As usual, the program was preceded by a lunch provided by Stacey Kettleman. Beth Tikvah’s Rabbi Adam Rubin did the Hamotzi and Toby Rubin, co-executive director of the Kehila Society, welcomed everyone. Among the 120 or so attendees were members of the Kehila Society and of JSA, as well as a group from L’Chaim Adult Day Care.

The entertainment portion of the program took place in the sanctuary, where Ken Levitt, president of JSA, spoke briefly and Rubin introduced the “dueling pianists”: Marilyn Glazer and Lester Soo, both of whom are accomplished musicians and piano instructors. The two have known each other for 35 years and have been playing duets for much of that time – one piano, four hands. At the Empowerment Series performance, they began with four Hungarian rhapsodies and continued with Mozart’s Eine Kleine Nachtmusik. They then played a number of Gershwin tunes and ended with Cole Porter.

Rubin thanked the pianists for their wonderful performance, which was the last event of the 2018/19 Empowerment Series. The series will begin again in the fall, with a new lineup of events presented by JSA with other seniors groups in the community.