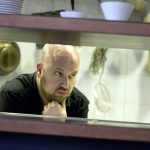 A Tel Aviv restaurateur and bar owner wanted to do something about the dire situation of Syrian refugees, so he turned to what he knows best – food.

Yair Yosefi is the owner of Nahalat Binyamin restaurant Brut and bar Extra Brut. Thinking about how he might be able to help, Yosefi connected with his friend Ronit Vered, who is a food journalist. Together, the two created Kitchen Without Borders, which raises awareness of the plight of and funds for Syrian refugees.

Although Yosefi said he would gladly go to Syria to cook, his Israeli passport doesn’t allow him to do so. “It was a dream of mine to go to Haleb,” he said. “When I was living in France, I had friends from there … very interesting cuisine. But, having an Israeli passport, it’s impossible. Syrians can go into Israel, but Israelis can’t go into Syria…. So, we just decided we’d do what we can.”

They have raised funds by selling Syrian-inspired dishes at their restaurants and by getting other restaurants to join in the fundraising efforts.

Yosefi started Brut and Extra Brut with partners two-and-a-half years ago, soon after he returned to Israel from Paris, where he had been living and working for 10 years. He is now married and has a four-year-old daughter.

Of the restaurant, Yosefi said, “I’m co-chefing with my best friend, Omar Ben-Gal. I’ve been cooking for the last 20 years, since I was 20. We were born and raised in Tel Aviv. It’s the heart for Israel, heart of cultural life in Israel.”

Being the father of a young child, Yosefi feels especially concerned with the situation women and children are facing in Syria. With his friends in the restaurant industry, he wanted to help, but the question was how.

“Every restaurant decided on a dish – either one inspired by Syrian cuisine or, if that wasn’t possible, like with Thai or French restaurants, they’d choose a signature dish,” said Yosefi. “All the revenue from this, which ran for a few weeks, went to a foundation called Karam, based in the U.S. and created by ex-Syrians. Karam uses donations to help, especially, kids … education…. It’s very important.

“We forget, because of the war, they haven’t gone to school or kindergarten … so they’re helping the women and the kid refugees with basic things like food, tents, clean water, education … everything.”

Restaurants throughout Israel joined in the effort to raise the funds, many in Tel Aviv, as well as some Arab and Palestinian restaurants, from large restaurant chains to small mom-and-pop operations, said Yosefi.

About how much was raised through the project, which ran Jan. 15-31, Yosefi explained that he and the other organizers decided ahead of time that every restaurant would donate directly to the foundation. “We trust each other, so we’re not even asking,” he said. “We decided not to count the money. Everybody gave what they made. I know it was quite an important amount … but, most important, it was an issue that was spoken about in Israel and the money obviously helped them – the refugees.

“From the Karam Foundation, we’ve heard two things. First, that it was a nice amount. And, secondly, that it was very heart-warming … [that] people from [across] the border, Israelis, chefs and bakers, gave money.”

As for the Israeli customers enjoying this special cuisine, Yosefi said, “People came and were looking for a certain dish from each restaurant devoted to the cause. It was very, very nice actually. It’s very nice when you go out, eat and drink, and you know that the dish means you’re donating money. Patrons are very generous.”

At Brut, they decided to make a spin-off dish, called Duhul Safadi, the recipe for which they were given by a Palestinian friend from Nazareth, though they called the dish A Night in Halab. Slow (overnight) oven-cooked lamb served on foraged vegetables cooked in yogurt, Yosefi described it as “our take on the Palestinian-Syrian dish.”

Brut chose this particular recipe because the ingredients are locally sourced, something they put an emphasis on with all their food.

Looking ahead for other ways to help, Yosefi said, “We’re going to do something, but we don’t know what yet. We want to see the reaction first.”

In September, Yosefi and his team will be going on the road for a few events in the United States, with stops in Charleston, Nashville and New York. They have been invited to Tokyo this April to do a pop-up booth.

“We’d love to bring our cuisine to Vancouver,” said Yosefi. “It would be fun. We’ll bring our knives and you bring your Canadian whisky. It could be a good match.”