After self-publishing a cookbook in 1988, she focused on healthy eating with Rose Reisman Brings Home Light Cooking (1993), which sold more than 400,000 copies. Since then, she’s been an oft-quoted expert on eating well, has appeared on TV and radio, worked as a teacher, and acted as a health and wellness consultant to businesses.

Reisman attended the Canadian School of Natural Nutrition to become a registered nutritional consultant. The mother of four ran a cooking school for four years, and then launched Rose Reisman Catering in 2004. She is also a nutritionist and adjunct professor at York University’s faculty of health, where she is a founding member of the university’s obesity task force.

Reisman also helps people eat well through the Personal Gourmet, a daily food delivery service launched in 2008 that offers both weight loss and healthy living plans she developed with the help of dieticians and weight management doctors. She has been a spokesperson for the national campaign of Breakfast for Learning and the national awareness campaign for the Canadian Breast Cancer Foundation, and has been an ambassador for the Canadian Diabetes Association. 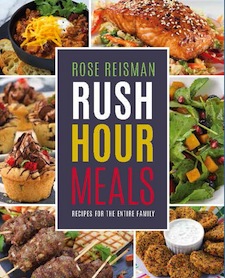 In coming weeks, Reisman’s newest cookbook will be released, Rush Hour Meals: Recipes for the Entire Family. It will be her 18th – chai – book guiding readers to a better life.

When she first started cooking, she told the Independent, she was making “very delicious, high-fat foods when everybody flocked to my home. I continued to do that and I became a good cook using loads of butter and cream and chocolate…. But then I found my own family history wasn’t that healthy. I had lost my dad to heart disease in his 50s, my grandmother at 52 to diabetes type 2. Everybody had high blood pressure, high cholesterol and obesity, and I was an overweight child.

“This was all going on in my early 30s. I was slim and running every day, and I had lost the weight I had as a kid, and I figured I was fine. But then I went for a routine physical and my cholesterol was literally off the charts like somebody in their 60s or 70s who’d been eating steak every day.

“I realized that what I ate, even though I exercised and maintained a healthy weight, was still clogging my arteries, and my family history was such that I couldn’t afford to do it. It was then that I turned around, in 1993. I started researching healthier cooking, and I started to write my first book in healthy cooking. I’d written three or four books before that in higher fat meals.”

Like Reisman once did, many people equate being thin with being healthy.

“If you have skinny children, you kind of turn away as they’re eating junk because you think it’s not going to hurt them,” she said. “But what I started to learn is that cholesterol, diabetes, all of these things start when they’re children. Today, they’re finding kids in their early teens who have already got blocked arteries, high blood pressure, diabetes.”

She said that one child out of three born after 2000 will have diabetes type 2.

“I really encourage parents to be the role models at home,” she said. “I used to set the most delicious meals on the table, and they were good. I wasn’t talking vegan style, poached or steamed, but it was heart-healthy fat, and my kids would often turn up their noses. But, over the years, they picked it up, it was in the back of their minds and, today, all four of them, they’re adults, they’re really good eaters, they exercise.

“That’s one of the reasons that I launched into the books, the media, the catering company, the restaurant consulting,” she said, “because it’s really a great way to spread your message.”

It’s also a great way to spread less healthy messages. There are dozens of TV shows on food – a whole network, in fact.

“They’ve done these studies from Harvard that people who watch these shows are actually heavier than other people. Nobody really wants to watch a healthy cooking show. There’s only one or two healthy cooking shows…. It’s ridiculous. You’re piling up butter to your elbow when you’re mixing, and people just love watching that decadence.

“But, when Paula Deen came out, and she was diabetic, all of a sudden people went, ‘you know, you can’t be that heavy.’

“You don’t see in seniors homes obesity in people in their 80s. If you notice that, people die off in their 70s, 60s, from cancer, heart disease or stroke, or diabetes when you’re obese.”

For people just starting to cook for themselves, a mistake they make, said Reisman is “they can just whip something off, and not measure and not read the recipe.” She said that’s not really possible, “unless you really have a food gene,” and there are only “a handful of people like that. I’d say 99% of us can’t do that.”

Even with years of experience, Reisman still finds new foods that she both enjoys and that are healthy.

“A couple of foods that I like, that allow me to maintain a really healthy body weight, are quinoa and Greek yogurt,” she said. “Quinoa is the only seed-grain that’s considered a complete protein: a half a cup is equal to three ounces of chicken or fish. So, on the day that you don’t want to eat the hormone-injected chicken or the farm-raised fish, you can have quinoa. Put dressing on it, make it with tomato sauce, and it is a powerhouse of nutrients.

“But, the most important thing is, after you eat a bowl of quinoa versus say white rice in a Chinese food situation, [where] you burp, you eat again, you burp … with quinoa, you walk away full and you’ll find you won’t get hungry for about three hours. That’s because the glycemic index, your blood sugar, is rising very slowly, whereas with white rice or with white starch, what I call an empty grain, it’s rising quickly and then it crashes, which means you need more of that food.”

As for Greek yogurt, she said, “you can have it plain or mix it with berries for breakfast. You can even have Greek yogurt with quinoa. Greek yogurt has 18 grams of protein for three-quarters of a cup, which is unbelievable, more than you could ever imagine in eating fish or chicken in the morning, so it’s a super breakfast.”

And what about that morning coffee?

“I think coffee by itself is great, and the studies now prove more and more that it lowers cholesterol, it’s got some great antioxidant powers,” said Reisman. “The key is, you can’t be drinking coffee after coffee after coffee. If you’re starting to get anxious, or you’re not sleeping at night, you’re drinking too much!

“The problem is that coffee shops are mixing in whipping cream and syrup and tons of sugar,” she added. “If you have two double doubles every day, you’ll gain something like 12 to 13 pounds in a year, just from the cream and sugar in those two drinks. It’s not coffee. It’s candy.”