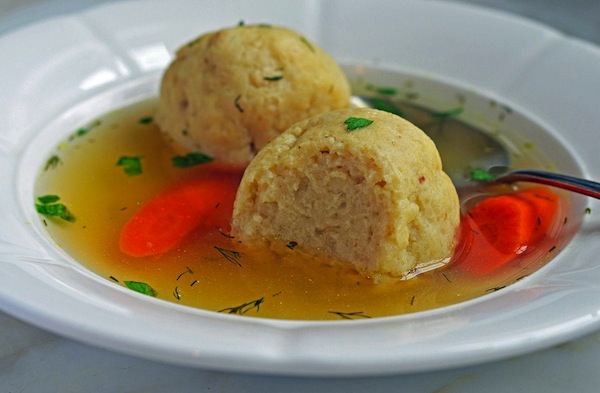 Chicken soup with matzah balls is a staple of the Ashkenazi Passover seder; for meat-eaters, at least. (photo from onceuponachef.com)

My father used to start the seder with a joke. One I remember was: Abe goes to see his boss and says: “We’re doing some heavy house-cleaning at home tomorrow for Pesach. My wife says she needs me to move all the heavy furniture, clean the stove and even clean out the garage.” “We’re short-handed Abe,” the boss replies, “I just can’t give you the day off.” “Thanks boss,” says Abe. “I knew I could count on you!”

Passover was both an exciting and an embarrassing time for me. Both my parents were born in Australia in the late 19th century, when Jews were quite a rarity there. The influx of Jews from Europe to Australia only began after the Second World War, when those lucky enough to survive the Holocaust reached our shores. Back then, I was the only Jewish child in my school, so I had no Jewish friends and, apart from some family members, neither did my parents. Of necessity, we were quite assimilated, as there were few facilities available for Jews in those far-off days.

Still, we adhered to some traditions, and one was the seder. As a child aged 7, it was exciting for lots of reasons, but I had no one to share it with except my two brothers and two sisters, all much older than I was. Our family of seven would sit around the table with Great-Aunt Frances and Uncle Dave, and some of our non-Jewish neighbours, who looked forward to being invited to join us in this, to them, odd ceremony every year. One of them was Penelope, who had a daily radio show and, the next day, she would relate to her listeners all the details that she understood and that seemed to fascinate her.

The table would be set with a white tablecloth and all the traditional seder trappings, with a big decanter of raisin wine my mother had made. I was wearing my “best” dress, which I loved. Like most people during those Depression years, we had very little money, so most of my clothes were hand-me-downs from my sisters. But this one had been bought especially for me and I loved it – pink velvet, with puff sleeves and a lace collar. It broke my heart when I outgrew it.

My father, of course, sat at the head of the table, a big pillow on his chair for reclining. Dad was a man of enormous contrasts, something of a genius. He knew Hebrew, Latin and Greek and thought no one could call themselves educated without an acquaintance of these classical languages. But he was also very modest, rarely let it be known that he was a scholar, and had a fund of off-colour stories that always made me blush and resulted in my being very prudish well into adulthood.

He would conduct the service from the Haggadah in Hebrew, giving explanations in English all the way through. He said that the Wise Son who asked questions at the seder was so intelligent that no one had the faintest idea what he was talking about. The Wicked Son had to be excluded from the table, so he went back to work and got paid double-time for working on Pesach. When the Simple Son asks, “What is this?” you just tell him, “It’s dinner.” And, as for the one who does not know how to ask, you go and wake him up and say, “Next year, remember to come to the table.”

When it came to the Four Questions, Dad had transliterated the “Ma Nishtana” for me in big English letters and the guests all thought I was very clever to be reciting something in Hebrew when I was only 7. I did nothing to disillusion them. I loved the singing and so did our guests, who, after some coaching from Dad, sang along with us heartily, with mostly mispronounced words. I remember we always sang one song in English, “Chad Gadya”: “Only one kid, which my father bought for two zuzim….”

A good meal followed, although my mother – a great cook of Australian dishes – didn’t do too well with Pesach recipes, as her own mother had died when she was my age, so she didn’t have the benefit of learning from her mom. But she tried valiantly. The chicken soup was good, apart from the matzah balls, which were as tough as bullets; and her gefilte fish I won’t attempt to describe. Our guests probably thought we were meant to suffer, and this was just another punishment like having to eat matzot for a week.

Just as I couldn’t share my friends’ Christmas and Easter festivities, I didn’t even tell them about our seder. But now I realize how special it was. When I close my eyes, my family are with me again. Maybe that seder was the last time we were all together in person, as my two brothers soon went overseas with the Royal Australian Air Force. The younger one, shot down over Rommel’s lines in Tobruk, never returned. Over the intervening eight-plus decades, the losses have multiplied. There is only one beloved sister left, and she is in Australia.

I would love my parents to be able to see my family at a seder in Israel. We are more than 50 people now, including all the grandchildren and great-grandchildren. I am sure we observe it more authentically today, but there is something special I have lost that can never be replicated – the family I once had, who gave a little girl love, safety and security.

When I think about our seder table back then, it’s not just about the matzot, shankbone, roasted egg, bitter herbs and charoset. I see the family I have loved and lost, and hear the jokes and the songs and the laughter. I have come a long way since then, both spiritually and physically, but the seeds were planted back then, at the seder table with my family, who will never be forgotten.