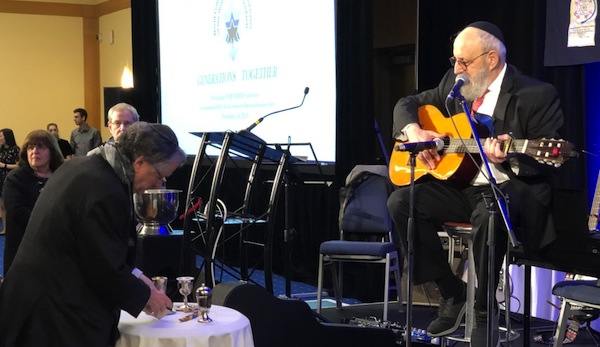 Child survivors Rabbi Joseph Polak, right, and Robert Krell at the Havdalah service Nov. 2, part of the annual conference of the World Federation of Jewish Child Survivors of the Holocaust and Descendants. (photo from Robert Krell)

When Halina Levitt was 2 years old in a part of Poland that is now in Ukraine, her mother left her with a Polish farm family to hide through the Holocaust.

“My mother luckily survived and came back to retrieve me,” Levitt told the Independent. “Of course, at that point, I was 5 years old and she was a total stranger to me. I didn’t want to go with her.”

The family who saved her didn’t want to relinquish her, either, and, as the conflict between the birth mother and the Polish family escalated, neighbours gathered and tried to intervene on behalf of the family as the mother tried to reclaim her child.

“She was quite scared for her life until we boarded the bus and got away from there,” Levitt said.

Rose Raport, a retired doctor from New Jersey, was also left with another family.

“I was given away to a Polish farmer at age 4,” she said. But her parents never returned. “I spent six years and, by the end of my stay with the Polish family, I found out that I’m left alone. There were no parents, there was no sibling, no family and that’s it.” She was turned over to the Jewish community and continued her life in a Jewish orphanage.

Karen Komar, a Massachusetts woman, managed to remain with her family in their home in Hamburg, Germany, until 1941. Then, an intervention by a distant American relative – Arthur Bulova, head of the Bulova watch company – succeeded in getting the family a visa to the United States.

These were just three of the experiences of people who convened in Vancouver Nov. 1-4 for the 31st annual conference of the World Federation of Jewish Child Survivors of the Holocaust and Descendants.

About 400 people attended the gathering – about 110 survivors, joined by members of the second, third and fourth generations, as well as spouses. Each has a unique experience, yet all who spoke with the Independent said such meetings are an opportunity to share time with those most likely to comprehend what they have endured and the lives they have led.

The conference was co-chaired by Vancouverites Marie Doduck and Dr. Robert Krell, both child survivors of the Holocaust.

The conferences create a feeling of belonging, said Doduck.

“Our survivors feel safe, they talk about their lives, their grandchildren, their past, their future, their thoughts in a safe place,” she said. “And the children felt a safe place to speak about their feelings, that they may not be able to do with their parents or grandparents.”

Child survivors – almost all of whom were hidden children during the war because almost none of the children who were sent to concentration camps survived – were not recognized, by themselves or others, as Holocaust survivors or as a distinct group until the 1980s. Because they were so young during the war, or because they were not in the camps, their experiences were dismissed by adults. A 1988 book by Helen Epstein, Children of the Holocaust: Conversations with Sons and Daughters of Survivors began a reconsideration of the individual and collective experiences of the second generation, but also of those who survived as hidden children and who were not, until then, considered “survivors.”

“We still are the children inside of us,” said Doduck. “When I speak in schools, I speak of the child inside of me, not this mother, grandmother, now great-grandmother that they’re looking at, this old lady. This old lady is really Mariette the child, who is starting, after 70 years growing up … who had no childhood, who lived with bombs and death and starvation and disease. I knew that, if I was sick, I would die, and most of us have these kinds of stories.”

Categories can be fluid, Krell explained. As a hidden child who survived in Holland thanks to a Christian family, he is a child survivor. But he is also a second generation, because his parents survived the camps and came back to claim him. This was statistically extraordinary, as the Netherlands had one of the highest Jewish death rates by country in the Holocaust.

Krell feels a special kinship with Abe Foxman, longtime head of the Anti-Defamation League, with whom he organized one of the first child survivor conferences, in 1991. Foxman was hidden from ages 2 to 5, just like Krell. His parents also returned to claim him, an even more statistically anomalous outcome, given that he was in Poland, which had the most catastrophic statistics of annihilation. Krell tried to get Foxman to attend this month’s conference, but the distance was too great to travel.

Location is an important part of the conferences, said Krell, and accessibility is one of the reasons they move annually in Europe, all over North America and to Israel, depending on the year. This year, almost half the attendees were British Columbians.

More than three dozen workshops, panel discussions and plenaries offered a range of topics for attendees, with some exclusive to survivors or successive generations. An art installation and a musical concluding evening added to the weekend experience.

Guest presenters included Rabbi Joseph Polak, a child survivor of Bergen-Belsen and author of After the Holocaust the Bells Still Ring; Dr. Catherine Chatterley, founding director of the Canadian Institute for the Study of Antisemitism; Prof. Chris Friedrichs, professor emeritus of history at the University of British Columbia; and Vancouverite Robbie Waisman, a survivor of Buchenwald, who spoke together with Éloge Butera, a survivor of the genocide against the Tutsis in Rwanda, about human rights activism. Krell’s plenary address opened the conference on the Saturday morning with a keynote titled The Future of Our Past: Informing and Inspiring Next Generations.