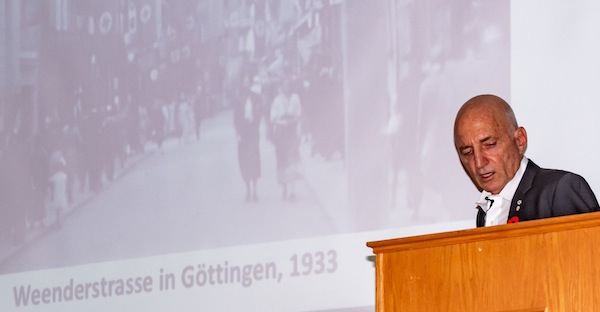 In the 1930s, German Jews were required to register all precious metals in their possession, a prelude to having them confiscated. In Hamburg alone, the Nazis collected 20 tons of silver, much of it Judaica. Of this, they melted down 18 tons. Two tons was deemed by the Nazi curator Carl Schellenberg to be of artistic or other value in its existing form.

After the war, Schellenberg was kept on by the British because his scrupulous indexing of artifacts made him valuable. His love of the city of Hamburg meant he ensured that some of the most precious pieces of stolen art and artifacts made their way to that city’s museum.

That is where Dr. Michael Hayden, a Vancouver researcher in molecular medicine and human genetics, and one of the world’s leading researchers in Huntington disease, was able to trace one of the few remaining pieces of his grandparents’ once-extensive collection of Judaica.

A silver Kiddush cup, crafted in 1757 and embossed with a vivid three-dimensional depiction of the story of Jacob’s vision of a ladder to heaven, which belonged to his grandparents, Gertrud and Max Raphael Hahn, has been restituted to the family. It is now on loan, a small artifact in size but one of the most stunning pieces in a just-opened exhibition at the Vancouver Holocaust Education Centre, titled Treasured Belongings: The Hahn Family & the Search for a Stolen Legacy.

Hayden delivered the keynote address at the annual Kristallnacht commemorative program Nov. 7, before the opening of the exhibition to the public. The exhibit runs to Nov. 27, 2020.

“It’s a story that it’s taken me a long time to confront,” Hayden told the Independent.

Hayden’s grandparents were transported to Riga, Latvia, in 1941, where they were murdered by Latvian collaborators of the Nazis. Max Hahn had been arrested for the first time on Kristallnacht, three years earlier, but, with Gertrud, had managed to secure the passage of many possessions to safe locations in the neutral countries of Sweden and Switzerland. More importantly, they had sent their two children, daughter Hanni and son Rudolf – Hayden’s father – to safety in London.

After the war, the orphaned pair retrieved the remnants of their family’s material possessions. Rudolf, who joined the British army in 1943 and adopted the less Germanic-sounding name Roger Hayden, moved to South Africa. There, more than a dozen boxes sat undiscussed in the family home. When Roger passed away, Michael Hayden shipped the boxes to his Vancouver home, where they sat, unopened, for another two decades.

When he finally confronted the parcels from his family’s past, he discovered a stamp collection, maps, artworks – and 9,000 original documents relating to his family’s history from the 1850s until 1941. These included heart-wrenching letters between Rudolf in England and his parents still in Germany.

While Michael Hayden was growing up, there were some items that his father had not kept stored away. One was a Paul Ritter violin that Rudolf had received on his bar mitzvah. Michael’s daughter, Anna, now a Vancouver hematology oncologist, played on it as a young person and Hayden hopes to one day hear grandchildren also play it. It is part of the exhibit. It is also a hint of how the family got its name. It was not a coincidence that, in anglicizing his name, Rudolf/Roger chose a variation on the surname of a legendary classical composer.

“There were piano recitals and all kinds of concerts in the Hahn family every Sunday,” said Hayden. “They used to have a little chamber orchestra, it was a totally different world. So, he chose the name Roger Hayden from Rudolf Hahn and I’m sure Hayden had some comfort for him because Haydn was so important in his life.”

Hayden credits the German government and museums for supporting restitution efforts. His family recently received a grant from the German federal government to hire a researcher to continue the search. Understandably, the challenges are great. The Hahn family’s collection of Judaica was considered one of the finest and most extensive in Germany, rivaling those of the Sassoon and Rothschild families. Because they had lent some objects to museums, and because of Max and Gertrud’s careful recordkeeping, the family has both photographs and detailed inventories of what the collection included before it was looted. Most families do not have such tangible proof.

Hayden emphasizes that any material value of restituted artifacts is irrelevant and the importance is because of personal significance, and that the process represents steps toward reconciliation and restoring dignity of Nazism’s victims.

“For me, personally, it’s been a process of coming to terms with the unimaginable horror and confronting it,” he said.

He has had very positive and some negative experiences during this work. He is impressed with the German government’s efforts to seek forgiveness for their country’s past, including memorializations like the 70,000 Stolpersteine, stumbling stones, that have been installed outside the last homes of victims of the Nazis, and the fact that the vast Holocaust memorial in Berlin is located between the embassies of major countries in the heart of the city.

“When I see Germany and I see what they’re doing, it’s been very instructive for me about confronting your history and confronting it unabashedly,” he said, making parallels with Canada’s reconciliation process with First Nations.

Germany’s response is especially admirable in comparison to other European countries that experienced collaboration and, rather than confronting their past, are actively denying it.

But, Hayden has had negative experiences, including the discovery that the school his father had attended in Hamburg had, as recently as a few years ago, what amounted to a museum to those students who had fought for the Nazis, with not a trace of the fate of the Jewish students who had attended. The Nazi display is now gone and a marker lists the names of Jewish students who were murdered. But he also discovered that the school’s long-held assurance that they had never participated in Nazi activities was fabricated, when photos emerged of the school festooned in Nazi flags and students and faculty making Heil Hitler salutes.

“At a personal level, for me, it’s trying to give up the stowaway of sorrow and pain on my shoulders that I’ve never confronted and to move forward,” Hayden said. “It’s not that I’m at forgiveness, but I recognize that forgiveness is not so much for those you are forgiving, but for the forgiver. You can give up your own toxic anger and move forward. For me, it’s also been a journey to acknowledge my own German ancestry and come to terms with it.”

He hopes that the exhibit, his family’s story and the larger facts of the Holocaust resonate in today’s world.

“We’ve got to be aware of ourselves as Jews of condemning other populations, we have to be aware of stereotyping, we have to be even more acutely aware from our own history about the struggles and making sure that we learn from that in the way that we conduct ourselves, so recognizing, as we look at children on television separated from their parents, that we too can be horrified by that and do whatever we can to make sure that we are not complicit or even silent in the face of all of this,” he said. “In certain circumstances, unless we really hold onto some deep principles of democratic culture and value of life, your neighbours can become your killers.”

As the search for additional family heirlooms continues, Hayden acknowledges the challenges. “I think it is a needle in a haystack to be honest, but it’s worth pursuing.”

Of the entire experience, he said: “It’s been an opportunity to give individuality and identity for two of six million people who were murdered, to rescue them from generalizations and understand who they were and understand their distinctiveness and to bring my grandparents out of obscurity and give them the warmth and respect they deserve.”

The Kristallnacht commemoration where Hayden spoke began with a candlelight procession of survivors. Cantor Yaacov Orzech chanted El Maleh Rachamim. Philip Levinson, president of the Vancouver Holocaust Education Centre (VHEC), introduced the event and Nina Krieger, the VHEC’s executive director, introduced the keynote speaker. Rabbi Jonathan Infeld offered reflections after Hayden’s address. Jody Wilson-Raybould, member of Parliament for Vancouver Granville, offered greetings, and Councilor Sarah Kirby-Yung read a proclamation from the City of Vancouver. The event was presented by the VHEC, in partnership with Congregation Beth Israel, the Jewish Federation of Greater Vancouver, the Jewish Community Centre of Greater Vancouver and the Robert and Marilyn Krell Endowment Fund of the VHEC.