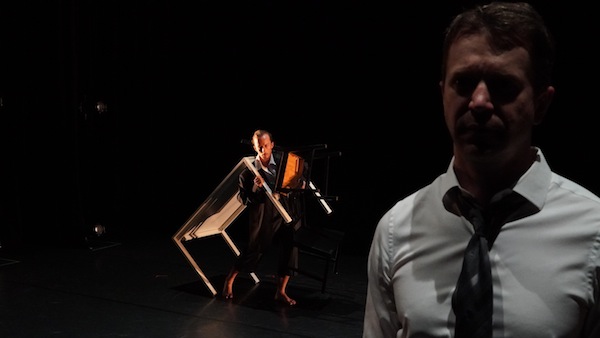 “The concert as a whole tells a story, and each song finds its place within that story,” Idan Cohen told the Independent about Take This Waltz, which sees its world première as a Chutzpah! Plus event Sept. 10-11 at the Rothstein Theatre.

Cohen is the artistic director of Ne. Sans Opera and Dance, so it might seem odd that he’s staging a show celebrating the music of Leonard Cohen. But he’s a fan of the Canadian icon, who died in 2016, and this production piqued his interest.

“I’ve admired Cohen’s lyrics and music for years,” said Cohen, who is not related to the singer-songwriter. “So, when Daniel Okulitch, one of Canada’s most appreciated operatic baritones reached out to me to directly to produce Take This Waltz, I immediately said yes. Daniel’s vision was to look at Cohen’s music through the classical tradition of the Song Cycles (Lieds). I thought that it was a really interesting way to look at Cohen’s music through a fresh, exciting lens.”

Okulitch contacted Cohen after having created a successful online concert that included some of Leonard Cohen’s work, as well as that of other singer-songwriters, which took place via Pacific Opera Victoria in winter 2020. Okulitch wanted to add dance to the concert.

“I knew that, if I was to take this on, I would want to focus on Cohen’s body of work and say something meaningful about the times we live in,” said Idan Cohen. “Ne. Sans’ mandate is to follow the operatic tradition in the full sense of it – to create work that integrates all the classical arts of theatre, music, dance, set and costume design. It is challenging to do in this economy, but I strongly believe in this type of offering.

“It took us some time to fundraise so that we can present this work as I believe it should be presented,” he noted. “We have an ensemble of cello, violin and accordion, with stunning arrangements by Adrian Dolan, and Daniel’s voice is so rich and sensitive, that it speaks straight to the heart. Amir Ofek is designing the set, Itai Erdal creating the light design and Christine Reimer the costumes. Alongside Daniel is the dancer/musician Ted Littlemore, with whom I’ve been collaborating for almost five years, who’s such a wonderful artist. I am truly blessed, and I hope that we’ll not just do justice to Cohen’s legacy, but help audiences experience it in a different, new way.”

About that legacy, Cohen added, “I had coffee with the wonderful Vancouver-based composer Rodney Sharman the other day, to discuss a future project that we’re working on, and Rodney said something that I found to be really relevant to Take This Waltz. He said that he thinks that my body of work is a variation of two core elements: love and death. And I thought to myself, that’s life, right? Cohen got it. His wisdom is so profound that it sometimes seems as if he knew the secrets of the human soul. I think it’s because he was brutally honest, a thing that we don’t see a lot in our contemporary culture. There’s so much pain and often bitterness and anger in his work, that are then composed in such generosity and love. What a beautiful combination. My work is to honour that.”

About his collaborators on Take This Waltz, Cohen said the production started at Pacific Opera Victoria, “as an intimate, beautiful concert of various music that included just a few of Cohen’s songs, and Vancouver Opera decided to support its development and creation. Jessica Gutteridge, a wonderful human and the artistic director of Chutzpah!, has given us a very generous creative residency at the Norman and Annette Rothstein Theatre in Vancouver’s JCC [to further develop the work]. It’s all live, no film or projections. I felt that Cohen’s work needs to be honest and direct. Having said that, there are quite a few surprises in the show – you’ll just have to come and see!”

Take This Waltz is being presented with Pacific Opera Victoria and Vancouver Opera, and Chutzpah!’s live music programming is supported by a grant from AmplifyBC. The Sept. 10-11 shows are also being supported by the Bierbrier family, in memory of Len Bierbrier, who was a dear friend of Chutzpah! board chair Lloyd Baron, said Gutteridge. Bierbrier was also a friend of Leonard Cohen, she said.

While most people cannot claim that level of connection to the legendary musician, many people do feel connected to him in some way. When asked to confirm that, indeed, he was not related to the singer-songwriter, Idan Cohen said, “We are all related, aren’t we? I first heard Cohen’s music through my dad and, in many ways, always felt that he is a father figure to me. So many of us feel that way about him and his music and poetry. I love him like family. Does that count?”

For tickets to Take This Waltz, visit chutzpahfestival.com.