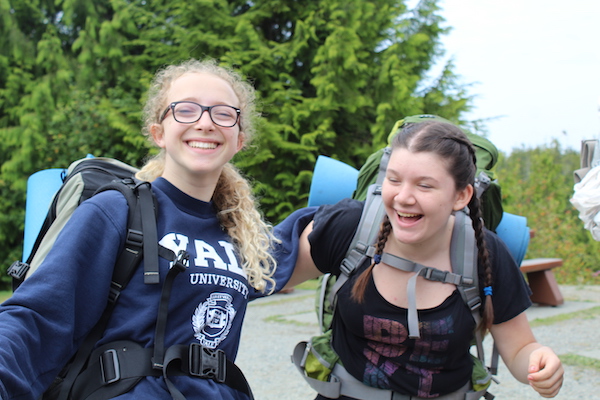 While Camp Miriam won’t be able to offer overnight camping sessions, it will once again be offering day camp experiences this summer. (photo from Camp Miriam)

I will never forget waking up in a puddle in the middle of the night, feeling water slowly dripping into my sleeping bag as I shivered and clenched my muscles, trying to maintain the tiniest shred of heat.

It was 2011, I was 14, and my kvutza (cabin group) was on a three-day hike that would take us through steep inclines and 30 kilometres of terrain. It poured every day and night, leaving us without a dry item of clothing by the first morning. We were wet, cold, blistered and exhausted. It was a miserable trip.

And we loved it.

On the final day, we emerged from the forest chanting a marching song and smiling with glee at what we had accomplished. To this day, I reminisce about this trip with that same giddy excitement.

And yet, I’ve always wondered, what allowed us to not only persevere, but to create a lifelong positive memory. Anyone who has spent time at Machaneh Miriam – the overnight Jewish summer camp on Gabriola Island – can attest to the magic each new summer conjures. The thing about magic is that we may not know how it works, but we know what it does. It’s what drove us forward, step by step through the mud with smiles and songs that summer. Everywhere you go at Miriam, you can feel the magic – from the building walls decorated with generations of camper art and poetry, to the dining hall filled with chanting and singing voices every lunch.

When the pandemic hit, these young leaders were several months into planning a six-week overnight summer camp on Gabriola. Not only did the pandemic erase months of hard work and preparation, it also posed a serious question: could camp’s magic exist outside of the island?

To most campers and staff, Miriam and Gabriola are inseparable. As the rosh (camp director), Marina Levy, said, “At Camp Miriam, we are connected to our community, to Gabriola and to our traditions.”

Envisioning a summer away from Gabriola was a daunting task. But, the tzevet (staff) rose to the occasion, creating not one, but three kaytanot (day camps) – one each in Vancouver, Victoria and Portland. By summer’s end, more than 200 campers, 60 staff and a whole bunch of parents resoundingly affirmed that camp’s magic can exist off of Gabriola.

To understand the importance of the kaytana, it is necessary to consider the context. At a time when campers had been confined to their homes and separated from their friends for months, the news that overnight camp was not happening came as a severe blow.

The immediate effect of the pandemic on kids’ mental health was profound. Research by SickKids hospital in Toronto showed that, in just the first three months of the lockdown, a majority of children showed a serious deterioration in their mental health.

According to Camp Miriam parents, the kaytana helped their kids overcome some of that stress. One parent said, “Last June, our daughter was really struggling with the impact of COVID on her life, it was significant. Camp Miriam’s summer camp in Vancouver brought her back to herself again. A combination of the social component, the programming and empowerment she felt, and the sense of purpose in her life helped her rediscover herself and revive herself.”

Another parent observed a change in her son after just one day. “I  almost cried hearing him talk about it,” she said. “I think it wouldn’t be too much of a stretch to say it was a transformative experience.”

Counselor Rakeea Gordis said that, during the weekly Shabbat tradition where campers sit together and reflect on their week, “At least one, but usually up to five kids would say that they were devastated that today, Friday, was the last day of the kaytana for the week.”

So, how did the staff manifest the magic of overnight camp in day camps far from the quiet comfort of Gabriola? A huge amount of credit goes to the youth leadership who worked long days and then late into the night throughout the summer creating kishutim (decorations) for special days, planning peulot (educational activities) and even burying items for a treasure hunt the following day.

Financially, none of this would have been possible without the support of the camp’s community and the Jewish Federation of Greater Vancouver, who stepped up at a time of extreme need, as well as the Grinspoon Foundation and the Heller Memorial Fund, who provided matching grants. It cost nearly three times as much to run the kaytana as to run the overnight camp.

So, perhaps, camp’s magic is not a complete mystery after all. As technical director Inbar Avrahami Saraf said, “[The kaytana] was an experiment, a proof of concept of the magic of machaneh, and how the magic is not in the physical space but in the chanichm [campers] and the tzevet and just the community that makes it so incredible.”

So, credit must be given to the force of will that the youth leaders and the wider Jewish community bring – the relentless push to build and dream; to create community and unforgettable experiences, whether they be on Gabriola Island, on a three-day hike in the pouring rain or in the midst of a pandemic.

“The magic of machaneh doesn’t just exist far away on an island, it exists where we choose to create it,” said Levy.

Unfortunately, once again Camp Miriam has had to cancel its overnight camp due to COVID-19, but, once again, the young staff are ready to create amazing kaytana experiences. To register for Miriam’s 2021 summer programs or to support the camp as it faces another challenging season, go to campmiriam.org.