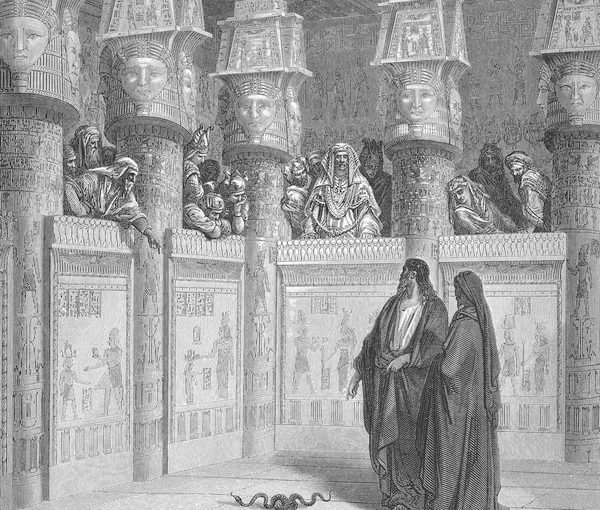 Stubbornness is a complex and harsh characteristic. It is no surprise, then, that Pharaoh, who is considered to be one of the most wicked characters in the Torah, is shown as being very stubborn. We see Pharaoh repeatedly refusing to engage with the reality that he is faced with and, stubbornly, over and over, refusing to send the Israelites out of Egypt.

Pharaoh is the paradigmatic stubborn person in the Exodus story, yet parashat Vayeira also points to other characters in the story who are not considered wicked in any way but who are nevertheless portrayed with this characteristic of stubbornness. This implies that perhaps stubbornness is not all bad. What can we learn about this character trait from our parashah and when it might make sense to employ it?

We’ll start with Pharaoh, the paradigm of stubbornness. Repeatedly, we see him refusing to yield, to listen to Moses and Aaron’s pleading, as the text says: “Pharaoh’s heart stiffened and he did not heed them.” (Exodus/Shemot 7:13) He appears equally stubborn in the conversations between God and Moses: “And God said to Moses, ‘Pharaoh is stubborn; he refuses to let the people go,’” (7:14) and in his response to the first plague: “Pharaoh turned and went into his palace, paying no regard even to this.” (7:23) Again and again, Pharaoh’s stubbornness – at least at a particular stage – is portrayed as having been almost thrust or forced upon him. God says as much to Moses: “But I will harden Pharaoh’s heart … and he will not heed you….” (7:3-4)

Indeed, as events are taking place and described, it appears that God is actively strengthening or hardening Pharaoh’s heart: “God stiffened the heart of Pharaoh, and he would not heed them, just as God had told Moses.” (9:12) This strengthens our resolve to discover what this stubbornness is really about, why it is so critical and what role it plays in the story.

Samson Raphael Hirsch suggests that this stubbornness or “hardening” that Pharaoh experiences can be divided into three types, based on the language that the Torah uses to describe it: “I will harden,” “I will make heavy” and “I will strengthen.”

1) Hard: being rigid, without registering any influences, without being influenced by anything that passes us.

2) Heavy: being a person of weight, able to be influenced, but with a significant gap between the actual impression and the willingness to act based on it. Sluggish.

Hirsch describes the three different, but similar, forms of this attribute and how it manifests itself in Pharaoh.

The first is characterized by rigidity, that is characterized itself by an ignoring of the environment, a rigidity that blocks any outside influences. This kind of behaviour can be seen when Pharaoh is completely unimpressed and unmoved by Moses’s pleading, the suffering of Israel, or even the plagues that affected him and his people directly.

The second is characterized by heaviness. This heaviness is not about ignoring – someone whose heart is heavy can absorb information from his surroundings, but this is insufficient to influence him, to get him to act upon those potential influences. They don’t propel him to act in the direction where the information points. This phenomenon is evident in the way that Pharaoh reacts to the second plague of frogs. This plague is described in all of its gross and gory details:

“If you refuse to let them go, then I will plague your whole country with frogs. The Nile shall swarm with frogs, and they shall come up and enter your palace, your bedchamber and your bed, the houses of your courtiers and your people, and your ovens and your kneading bowls.… The frogs died out in the houses, the courtyards and the fields. And they piled them up in heaps, until the land stank.” (7:27-8:10)

Despite this horrifying scene, Pharaoh is unfazed: “But when Pharaoh saw that there was relief, he became stubborn….” (8:11) He is not moved to eject the Israelites from Egypt. Instead, he is weighed down (perhaps wilfully) and unmoved.

Lastly, Pharaoh exhibits strength. According to Hirsch, behaviour that is defined by strength is self-aware and defiant. The lack of change in it is not defined by being weighed down or passive inertia, but rather an active refusal to be moved. He is aware that he doesn’t want to move or change because these actions are perceived by him as giving in. For example, during the third plague of lice (kinim):

“Then God said to Moses, ‘Say to Aaron, hold out your rod and strike the dust of the earth, and it shall turn to lice throughout the land of Egypt.’… The magicians did the like with their spells to produce lice, but they could not … and the magicians said to Pharaoh, ‘This is the finger of God!’ But Pharaoh’s heart stiffened and he would not heed them.…” (8:12-15)

Even when Pharaoh’s people tell him explicitly that they are all witnessing the finger of a mighty god, and all that Pharaoh needs to do to resolve the situation is let the people go, Pharaoh digs in his heels and will not give up and will not give in.

Pharaoh is not alone in his stubbornness, in his unwillingness to accept that the slavery is ending and the exodus is immanent. Even without a divine hardening of their hearts, the Israelites also show a stubbornness. It says about Pharaoh, “he didn’t heed” (e.g. 7:10-13) and it also says about the Israelites, “and they did not heed.” (6:9)

Even though it seems that Pharaoh and the Israelites are exhibiting the same behaviour – they both are stubborn in refusing to accept the reality that God is going to redeem the Israelites through Moses’s leadership – the contexts for their behaviour are quite different, almost opposite. Pharaoh is holding onto the Israelites and enslaving them. He is insisting on a continuation of the suffering and backbreaking labour, which he initiated. The Israelites, on the other hand, are described as refusing to listen because they themselves are suffering, “their spirits crushed by cruel bondage.” (6:9)

Israel needs to be convinced that this idea of the exodus, of actually leaving Egypt, is real, implementable and viable. They need to believe in it. While deep in the heart of slavery, it’s hard for the Israelites to imagine a different reality. Their insistence on relying on the here and now as opposed to a promise for the future stems from despair. How much hope are they supposed to keep?

Pharaoh also refuses to accept the future as described by Moses and, in this way, his stubbornness, in all its strength, weight and difficulty, is close to the Israelites’ despair. Pharaoh refuses to see what the Israelites cannot.

In contrast to both of these images of stubbornness, Pharaoh’s refusal and the Israelites’ despair, there is a third image. This third character needs to be even more stubborn, strong and resolute – this character is God. God’s stubbornness is characterized by steadfastness, insistence and resoluteness in the face of those who don’t believe in his presence and his promise. God needs to stand against those who refuse him, who repeatedly reject the vision of the future that He presents.

At the very beginning of the story, God makes a promise: “God spoke to Moses.… ‘I appeared to Avraham … and I have remembered My covenant. Say, therefore, to the Israelite people: I am God. I will free you … and deliver you … I will redeem you … and I will take you … and I will bring you into the land….’” (6:2-8)

A few verses later, God speaks to Moshe again: “Go and tell Pharaoh, king of Egypt, to let the Israelites depart from his land.” (11)

God is always responded to with negativity and refusal. “The Israelites would not listen to me, how then should Pharaoh heed me?” (12) God continues with his own steady perseverance: “So God spoke to both Moses and Aaron in regard to the Israelites and Pharaoh, king of Egypt, instructing them to deliver the Israelites from the land of Egypt.” (13)

God’s stubbornness is instructive and holds a lesson for all of us who dream of a world that looks different than the one we now inhabit. Maybe anyone who dreams about a different reality, anyone who believes that it is truly possible that our existence can be transformed, needs a form of stubbornness. They need to be unrelenting and steadfast in holding onto their dreams, rejecting the people who resist change, on the one hand, and who are too beaten down to have faith, on the other.

God’s character in the story emerges for the benefit of dreamers, to call us to be constant and steadfast in our faith that, indeed, tomorrow can be different. And, if we are not dreamers but rather are those who listen, God’s voice is charging us to bear the difficulty, the heaviness, the strength of those who are dreamers. Because it is in the merit of those divine representatives, such as Moses and Aaron, that we became able, we became brazen enough, to imagine what a life beyond slavery would look like, to see it and even live it.

Rabbi Avital Hochstein is president of Hadar Israel and a research fellow at the Shalom Hartman Institute. She received rabbinic ordination from the institute in 2016. Articles by Hochstein and other institute scholars can be found at shalomhartman.org.