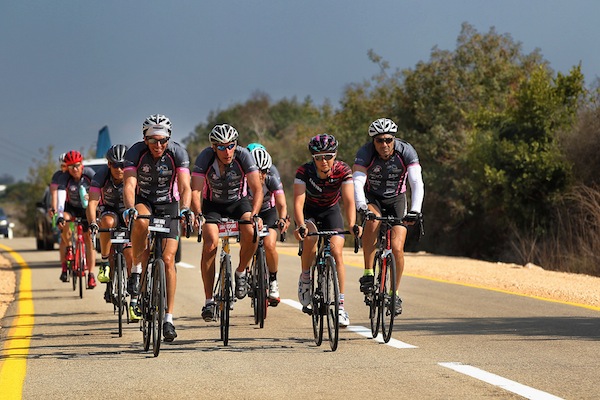 More than 100 Canadian cyclists participated in the recent Courage in Motion (CIM). The fundraising ride, now in its 11th year, has grown steadily in popularity over its first decade and, this year, like many before, was sold out.

The CIM initiative of Beit Halochem Canada, Aid to Disabled Veterans of Israel, welcomed cyclists from across Canada, joined by some Americans and Israelis. From Oct. 22-26, the visiting cyclists rode alongside Israeli veterans with disabilities on four fully supported routes, taking them through southern Israel’s archeological landmarks and its landscapes.

With the fundraising drive open until Dec. 31, it is expected that Courage in Motion 2018 will raise approximately $850,000. Cyclists’ efforts enabled members of Zahal Disabled Veterans Organization/Beit Halochem to participate in the ride and will also fund programming at Beit Halochem Centres in Beer Sheva, Haifa, Jerusalem and Tel Aviv, which provide individualized therapies, specialized sports rehabilitation training and cultural arts and family-oriented programming.

Lisa Levy, an avid cyclist and national executive director of Beit Halochem Canada, is the founder of Courage in Motion. “I’m pleased that the ride was, once again, sold out,” she said. “It’s evident that our cyclists embrace the aspect of riding alongside those who are directly helped by their efforts. This year, we’re incredibly proud that more than 120 wounded Israeli veterans participated due to the fundraising by our 110 Canadian riders. We are also gratified that many of our Canadian participants feel that they get more out of the experience than the disabled veterans.”

While many cyclists return year after year, several others were new to Courage in Motion 2018. Two of these first-time participants are internationally renowned sports figures.

CIM also welcomed cycling champion Eon D’Ornellas. Born in Guyana and having immigrated to Canada, D’Ornellas represented both countries during his career, winning numerous medals. He has owned D’Ornellas Bike Shop in Scarborough, Ont., for 30 years and, in 2011, he suffered a stroke during a club training ride. Like Beit Halochem members, he knows the challenges in reclaiming his life after serious medical trauma.

All Courage in Motion participants enjoyed group activities following each day’s ride, including a night walking tour of Jerusalem and an evening with members of Beit Halochem, who shared their personal stories of tragedy and triumph. Next year’s CIM takes place in Israel Oct. 27–31. Registration is expected to open in March.

In this year’s Courage in Motion, 75 Canadians, including nine from Western Canada, cycled alongside 85 Beit Halochem members with disabilities on a five-day ride through northern Israel, concluding in Tel Aviv. Group activities followed each day’s ride, including a visit to an army base, a night walking tour of Tiberias, wine-tasting and an evening with Israeli veterans, who shared their personal stories.

This year, more than $500,000 was raised to purchase much-needed equipment for Israel’s five Beit Halochem centres, and support their ongoing cycling programs. For more information and photos, visit courageinmotion.ca.