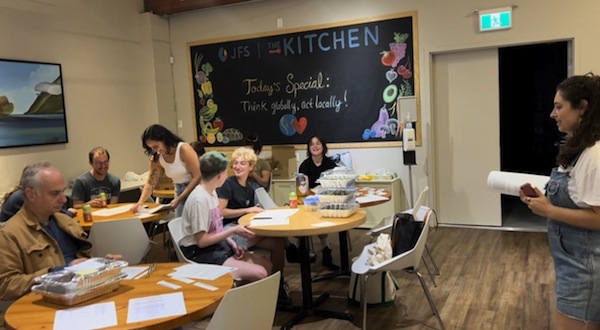 Volunteers from the Jewish community turn up each June to prepare, label and deliver freshly cooked meals to Black families as a sign of community support. (photo by JFS photo by Madison Slobin)

How do you build a more inclusive Jewish community, one that thrives on diversity? For Vancouver’s Jewish Family Services, says chief executive officer Tanja Demajo, resilience starts with building bridges. And it flourishes with finding common links between cultures.

During the last few years, JFS has been expanding the programs it offers to Jewish communities throughout Metro Vancouver, and looking for new ways to enrich conversations around diversity and inclusion.

Shiva Delivers, which provides traditional home-cooked meals to Black families dealing with loss and grief, was started by Madison Slobin and Becca Schwenk in 2020 following the death of George Floyd, who was killed on May 25 of that year during a routine traffic stop by Minneapolis police. His death ignited protests in cities across North America, including Vancouver. According to Demajo, Shiva Delivers emerged as “a response to the social injustice and the grief that the Black community were experiencing.” (See also jewishindependent.ca/providing-comfort-and-hope.)

Slobin and Schwenk ran the program independently the first year with a cadre of volunteers from the local Jewish community. In 2022, JFS jumped on board, offering its kitchen as an operation centre for the project, which takes place every June. According to Slobin, Jewish families from across Vancouver signed up to cook full-course meals and carry out the deliveries, inspired by the very Jewish tradition of responding to tragedy and mourning with food.

According to Demajo, news about the program arrived at the right time for JFS.

“JFS was going through this exploration of how do we work with and reach out to different communities,” Demajo said. “What we really learned was, first of all, a large Jewish community was interested in making this connection and intercultural exchange … with the Black community and showing their solidarity. And, on the other hand, the Black community was just touched by the fact that another cultural group offered that support.”

Demajo said she received many expressions of thanks from Black community members stunned by the gesture – and the elaborate dishes. “Are all Jewish people such good cooks?” one person called to find out. “Your food is amazing!”

community. Demajo said she realized this when a young woman who had received one of the dinners contacted her to ask why the Jewish community was doing this.

“Well, you know,” Demajo told the woman, “we have Black people in [our] community as well, and we want to build bridges and reach out [and] learn from each [other’s communities].” A moment later, Demajo said she heard the woman’s child calling to her. The child was speaking in Hebrew. “And that kind of took me back a little bit,” Demajo admitted.

It turned out the woman had moved here from Israel some years earlier but wasn’t participating in the Vancouver Jewish community. “Even though I lived in Israel,” she told Demajo, “I’ve never felt part of the community here.”

“And I realized at that moment,” Demajo said, “how important this [program] is, because we don’t know who the people are that we seem to support, until we actually do reach out and hear these stories.”

Slobin said the project not only inspires more opportunities for sharing between the two communities, it’s helping convey an important message to Black Jews that they are indeed a welcome part of the Jewish community. “Every single year that we have done it, we have had Black Jews participate and express how meaningful it is for them to see their own community recognize them in this way,” said Slobin.

Twice Blessed 2.0: The Jewish LGBTQ2SIA+ Initiative formed in response to a survey that JFS and JQT Vancouver (a volunteer-run Jewish queer and trans nonprofit) compiled in 2021 to determine the needs of the local LGBTQ2SIA+ community. The results were released earlier this year.

“Our commitment to diversity and inclusion must speak through our actions, and not only our words.

Although not an easy task, it is an imperative one,” wrote Demajo and JQT executive director Carmel Tanaka in the report, which can be found at jqtvancouver.ca/twice-blessed-2. (See also jewishindependent.ca/thirteen-calls-for-action.)

“One of the lessons we need to learn is, how do we make our agency more welcoming for different people?” Demajo said, “And, very simply, how do we do that in a dignified way?”

These questions are also helping JFS reexamine how it’s interacting with other cultures and communities when it’s providing social and economic support to Jewish families.

“I think it’s important for us as a community to understand the clients that we support live in very diverse neighbourhoods, which means that probably, on a daily basis, they see a lot of diversity and they live in those circles. When we as an agency provide certain supports to one targeted group and exclude their neighbours … that creates a lot of tension that gets reflected in their day-to-day life. So, at the end of the day, we all go home but they have to deal with the aftermath of the way we provided services … and this is why, on our end, it became really clear that, in order to support our clients, it’s not just a question of providing services directly to them,” explained Demajo. “It’s also ensuring that they have a safe community, a community of allies, a community that they can rely on when we’re not around. By building these bridges between all these different groups, I believe that we can create that.”

Learning from the past

JFS is currently exploring a number of new projects focused on diversity and social inclusion, both within the Jewish community as well as forming relationships outside its cultural space. JFS’s the Kitchen is often the meeting space.

“I think the beauty of having a kitchen is having a space for, again, sharing the stories and experiences through food,” Demajo said.

Recently, JFS has been partnering with organizations like CIJA and the Jewish Federation of Greater Vancouver to explore ways in which different cultures can share their culinary traditions, stories and passions.

Demajo said JFS is also doing a review of some of the programs it has offered in the past. “We really want to learn from things that went well, things that did not go well, and we understand in this space that there will be a lot of road [to travel], which is not easy. But it takes a lot of courage to step outside of that comfort zone as well.”

About tikkun olam, repairing the world, she said, “Conversation may start with a handful of like-minded people, but it takes diversity and acceptance to build an inclusive community.