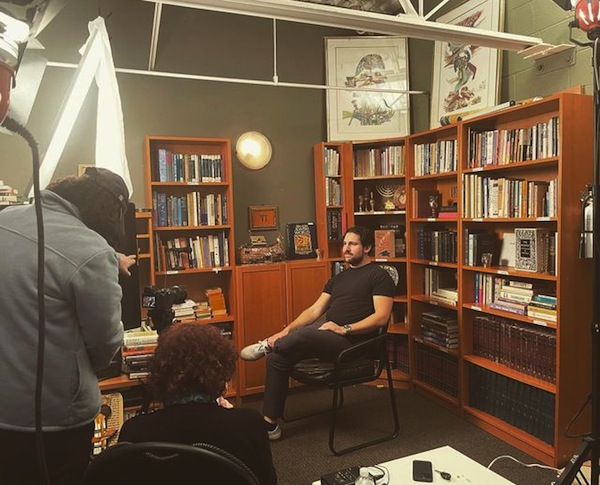 The White Rock South Surrey Jewish Community Centre Tu b’Shevat Gala will take place on the evening of Sunday, Feb. 5, the start of the holiday. With the theme “Strengthen Our Roots,” a main component of the event will be community members’ oral histories.

“The idea for the project came about in a very multidirectional way,” Helen Thomas Mann, WRSSJCC president, told the Independent. “First, we wanted to host an annual fundraising event and, with our membership drive being around the High Holidays, Tu b’Shevat seemed like a good time for it.”

Tu b’Shevat, the 15th of the Hebrew month of Shevat, is the New Year of Trees.

“Naturally,” said Thomas Mann, “the theme for a Tu b’Shevat event would be trees, so we began focusing on our ‘tree of life’ as a community. But we were coming back together after a three-year lull from the pandemic – we needed people to remember why this place is important, and why it should continue to exist. The idea became, let’s honour our roots, our history as a community of nearly 30 years; remember the branches that connect us to our Jewishness and the WRSSJCC, and celebrate our leaves, the future of our community.

“As a new president and newer member of the community,” she said, “I felt sensitive to the fact that, although I was playing a leadership role in the organization, there were many people who had worked hard before me to create this warm Jewish space. Our new board didn’t have to reinvent the wheel. I made it my mission to learn those stories.”

A therapist by profession, Thomas Mann is naturally interested in people’s stories, she said. “I had a conversation with Alysa [Routtenberg] from the Jewish Museum and Archives of British Columbia, and that’s where collecting life stories of people in our community came about. She provided me with a recording device. Then it occurred to me that these life stories and the stories of the JCC itself could be incorporated into our celebration.

“I was scrolling the WRSSJCC Instagram account, and I saw a person we follow, and who follows our organization back, who had beautiful fine art photos. Their website said they were passionate about storytelling. I took a chance and reached out, and the person happened to be Yaacov Green, who participated in the JCC as a child and whose father was a president of the JCC for many years! Yaacov generously offered to donate his time to record and edit these interviews to make a short presentation for the Tu b’Shevat event, and a longer version to be submitted to the Jewish Museum and Archives of B.C.”

During the project, Thomas Mann said, “Marcy Babins from the museum mentioned this may be the first representation of Jews from our outlying community in the archive, so I’m thrilled we will be represented. There’s such a rich history here of creative, scrappy and very grassroots Jewish community-building efforts. It’s been very inspiring to learn about. We have interviewed 23 people so far, plus we are having two make-up days…. We are also completing a few Zoom interviews for those who are no longer local.”

Everyone in the community was invited to participate, whether new to the community or having been a part of it for a long time. One of the participants was Daniel Shalinsky, who was interviewed for the project by his grandmother, Helen Lynn Lutterman.

“He attended Hebrew school at the JCC and spent lots of time there as a child,” said Thomas Mann. “There are pictures of him as a child with a hammer, literally building our WRSSJCC alongside his family. His parents are Hertha and Steve Shalinsky, who we are honouring at the Tu b’Shevat event. Their family, including Steve’s brother and his wife, Ken and Andrea Shalinsky, were integral in acquiring our physical space. Steve was a president for many years. For more on the fascinating story of how the space was acquired, you will have to attend the event to find out!”

In addition to the community histories, award-winning Yiddish singer Tania Grinberg will be featured at the celebration. And the night’s keynote speaker will be Karen James, who will share the story of her experience at the 1972 Olympics in Munich. James was there with the Canadian Olympic swim team, and witnessed a group of people climbing over the wall of the Olympic village. Only later would she find out that those people held hostage and then murdered 11 Israeli athletes. “She will share how witnessing this event impacted her life, her connection to her Jewish identity, and her relationship with the WRSSJCC,” said Thomas Mann of James’ presentation.

The Tu b’Shevat fundraiser is for specific programming, as well as operating expenses of the WRSSJCC.

“We are fundraising to generally pay our bills, and our hope is to be able to hire a part-time employee to support our admin needs and flourishing programming,” Thomas Mann explained. “We also have a list of ‘wishing tree’ items that range in dollar amounts from new oven mitts to computer monitors, and open amounts for specific purposes such as donating towards a child in need’s Hebrew school tuition. Long term, we would love to be able to find a new building space where we could have a stand-alone building, as opposed to being in a strip mall, with an outdoor area for a sukkah and community garden. That would be our pie-in-the-sky donation! We are a 100% volunteer-run organization, so every contribution counts.”

The entire community is welcome to the Feb. 5 event, which will be held at the White Rock South Surrey Jewish Community Centre, 32-3033 King George Blvd., in Surrey. “We considered the ease of hosting in a different location for space restrictions, but it seemed too important to centre the space,” said Thomas Mann. “Plus, our tree of life is on the wall, and we will be unveiling the new additions at the event.”