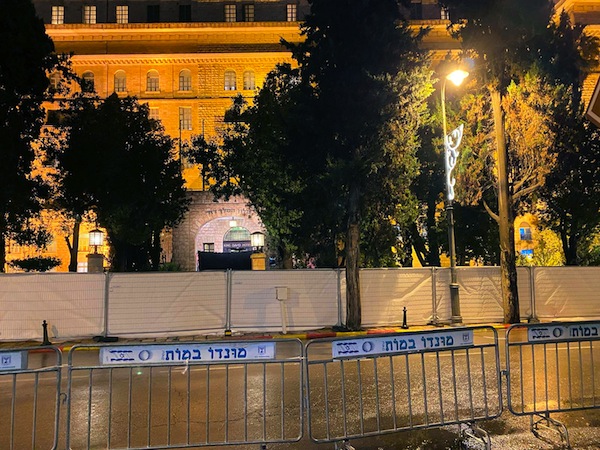 The King David Hotel was partially obscured by a temporary security barrier as part of the preparations that were carried out in Jerusalem for the arrival of leaders from more than 45 countries for in the Fifth World Holocaust Forum, which took place at Yad Vashem this week, and marked the 75th anniversary of the liberation of Auschwitz-Birkenau in Poland. (photo from Ashernet)

Monday marks the 75th anniversary of the liberation of Auschwitz-Birkenau. That date, Jan. 27, has been set aside annually to mark International Holocaust Remembrance Day.

Scores of officials from around the world were to descend on Jerusalem this week to attend a ceremony at Yad Vashem and a forum on the Holocaust. Expected guests include Canada’s Governor-General Julie Payette, Prince Charles, Russian President Vladimir Putin, French President Emanuel Macron, U.S. Vice-President Mike Pence and a long list of royalty, heads of government and others from around the world, especially from Europe.

Among the more attention-grabbing guests is Volodymyr Zelensky, president of Ukraine. Zelensky is a particularly interesting man in a particular role at an interesting time. He will be in Jerusalem alongside Pence and other world leaders at the very moments when the U.S. president is undergoing an impeachment trial initiated as a result of a phone call with Zelensky, probably the only reason most North Americans know his name. But that is among the least remarkable things about the leader.

A political neophyte (aside from playing the Ukrainian president in a satirical TV series), Zelensky was elected on an anti-corruption platform. In advance of his visit to Israel for the commemoration events this week, he engaged in a lengthy and witty interview with the Times of Israel about his family’s history – some relatives live in Israel and he has visited and performed comedy there many times – and his reflections on Jewishness, Israel and contemporary politics.

It caused some curiosity when Zelensky was elected because he has, in his words, “Jewish blood.” It is a common term, perhaps especially in formerly Soviet societies where religion was officially negated and so identities are defined obliquely, but the phrase “Jewish blood” is unfortunate in the context of Ukrainian history.

Among the considerations facing the country at present is the complicity of its citizens in the Holocaust, including in the massacres at Babi Yar, a ravine in the capital of Kyiv, where an estimated 100,000 to 150,000 individuals were murdered during the Nazi occupation, including more than 33,000 Jews on one day in September 1941.

In 1976, Soviet officials erected a monument marking the site and the cataclysm – ignoring the Jewish particularity of the mass murder and lamenting the deaths of Soviet victims of Nazism. It is undeniably true that victims at Babi Yar also included Roma, communists, Ukrainian nationalists and prisoners of war, all of whom deserve to be commemorated and mourned. But the omission of the Jewish identities of most of the victims at the site has been a point of pain and conflict for decades.

Zelensky’s government is remedying this. Begun by civic officials and Jewish leaders and endorsed by Zelensky’s predecessors, a Babi Yar Holocaust Memorial Centre is being constructed, with anticipated completion in 2023. The government is also undertaking a more transparent assessment of the country’s role and its citizens’ collaboration during the Second World War, outpacing most of their eastern European neighbours in addressing this dark past.

Still, some red flags remain. Zelensky claims that there is no antisemitism in Ukraine, an unequivocal statement that bewilders. It would be careless for any leader to ascribe complete innocence of bigotry to their entire citizenry, more so the leader of a country with a history like Ukraine’s.

He is, in some ways, between a rock and a hard place. While making blanket denials of Ukrainian antisemitism, he is also attempting to move his society away from the glorification of nationalist – meaning, among other things, inevitably antisemitic – historical figures. He points to the fact that he, a novice politician with “Jewish blood,” was elected to the country’s top post as evidence of tolerance in Ukrainian society. It does seem encouraging.

Also encouraging is the extensive list of world leaders arriving at Yad Vashem not only for a commemoration but for an educational forum, titled Remembering the Holocaust: Fighting Antisemitism. Israel’s President Reuven Rivlin has said the purpose of the meeting is “to think about how to pass on Holocaust remembrance to generations who will live in a world without survivors, and what steps we must take to ensure the safety and security of Jews, all around the world.”

Seventy-five years after that terrible epoch, the topic remains timely.