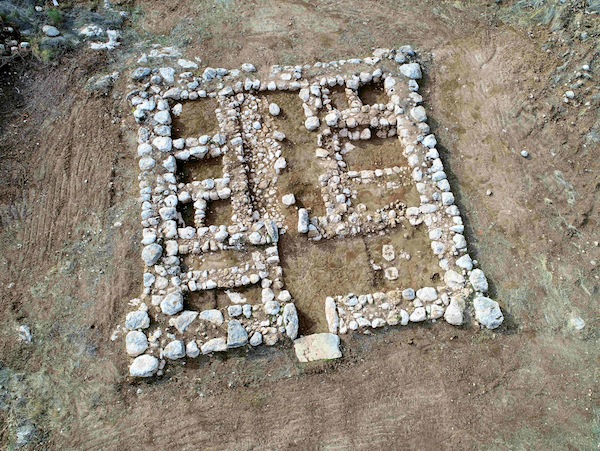 An aerial photo of the remains of a 3,200-year-old Canaanite fortress built near today’s town of Kiryat Gat. (photo by Emil Aladjem/IAA via Ashernet)

The Kiryat Gat fortress site, which was opened to visitors this week, was prepared by the Israel Antiquities Authority (IAA) and Jewish National Fund (KKL).

According to archeologists Saar Ganor and Itamar Weissbein of the IAA, “The fortress we found provides a glimpse into the geopolitical reality described in the Book of Judges, in which the Canaanites, Israelites and Philistines are fighting each other. In this period, the land of Canaan was ruled by the Egyptians and its inhabitants were under their control. During the 12th century BCE, two new players entered the game: the Israelites and the Philistines. This led to a series of violent territorial disputes. The Israelites settled in non-fortified settlements at the Benjamin and Judean mountains. Meanwhile, the Philistines accumulated power in the Southern Coastal Plain and established cities such as Ashkelon, Ashdod and Gat in an attempt to conquer more areas. The Philistines confronted the Egyptians and the Canaanites on the borderline, which probably passed at the Guvrin River, between the Philistine kingdom of Gat and the Canaanite kingdom of Lachish. It seems that the Galon fortress was built as a Canaanite/Egyptian attempt to cope with the new geopolitical situation. However, in the middle of the 12th century BCE, the Egyptians left the land of Canaan and returned to Egypt. Their departure led to the destruction of the now-unprotected Canaanite cities – a destruction that was probably led by the Philistines.”

The dimension of the fortress is 18 metres square and watchtowers were built in the four corners. A threshold, carved from one rock weighing around three tons, was preserved at the entrance of the building. Inside the fortress was a courtyard paved with stone slabs and featuring columns in the middle. Rooms were constructed on both sides of the courtyard. Hundreds of pottery vessels, some still whole, were found in the rooms.

The remains of the fortress were uncovered with the help of students from the Israel studies department at Be’er Sheva’s Multidisciplinary School, students from the Nachshon pre-military preparatory program and other volunteers. This was done as part of the IAA’s policy to bring the general public, and especially the younger generation, closer to archeology.