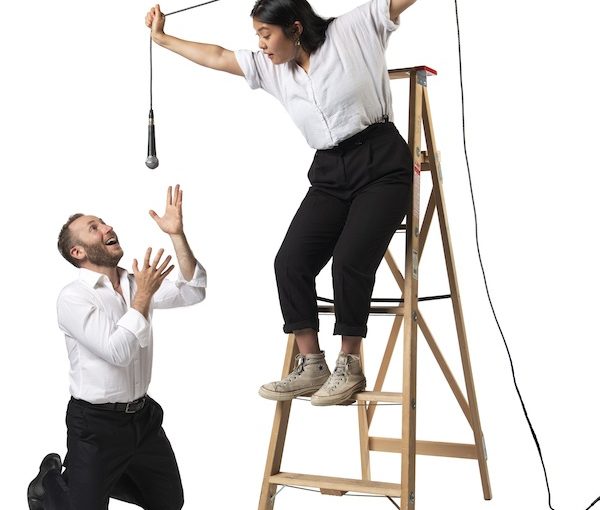 Josh Epstein and Amanda Sum in do you want what i have got? a craigslist cantata, written by Veda Hille, Bill Richardson and Amiel Gladstone, and presented by the Cultch and Musical Stage Company. (photo by Emily Cooper)

Welcome back the cast of wild and wacky characters from the Craigslist community as they attempt to buy and sell online, all the while longing and searching for human connection – this time with a fresh, new perspective on social isolation, and livestreamed from all around the Cultch. The production features the original songs “300 Stuffed Penguins,” “Chili Eating Buddy,” “Decapitated Dolls,” and more. Joining actors Epstein and Sum in the cast are Meaghan Chenosky, Kayvon Khoshkam and Andrew Wheeler. Showtimes are Feb. 5-6, 4:30 p.m. and 7:30 p.m., and Feb. 7, at noon. Tickets ($25/$29/$58) can be purchased from 604-251-1363 or thecultch.com/event/a-craigslist-cantata.

Generally, I don’t think background research is something that should be required in order to fully enjoy a performance; but every now and then a play really needs context, and the viewer becomes lost without it.

So, I would suggest – even to those with extensive Russian literature under your belts – if you have not read Alexander Pushkin’s dramatic poem, “Eugene Onegin,” start there before you see the musical Onegin. The poem contains descriptions of the characters, homes and countryside that add depth of interest that could simply not be communicated on stage.

That’s not to say that Onegin (pronounced “Onyegin”), the musical interpretation of the poem, can’t stand on its own. The singular creation by Veda Hille and Amiel Gladstone, combining the poetry of Pushkin and the opera of Tchaikovsky, is highly entertaining from start to finish.

The supremely talented group of seven performers, including the Jewish community’s own Josh Epstein, executes so many complex harmonies and moving solos, I certainly wasn’t walking out at intermission.

At first, Onegin rejects Tatyana, breaking her heart, and turns his attention to Olga, incurring Vladimir’s jealousy and bringing about a duel. Years later, after extensive traveling, Onegin returns to St. Petersburg and wants to be with Tatyana. But, by then, she’s already married, and Onegin realizes he’s wasted his life chasing women he doesn’t care about.

Taking place primarily in rural vacation homes, these well-to-do look for anything to “deal with the boredom of long winters” and come up with hunting, dancing, dueling and falling in and out of love.

The script includes quite a bit of play-by-play, where explanations of who’s who and what’s going on are interspersed with the action on stage. One by one, we’re introduced, in song, to the characters, with tongue-in-cheek descriptions. At one point, even the details of an impending pistol duel are sung to audience – just in case we were a little rough on the regulations.

These “asides” help with the background and also offer some great comedic breaks, often picking up on the satire that winds its way through Pushkin’s original work.

As an added bonus, guests are encouraged to bring their alcoholic drinks into the theatre and raise a glass for a sip every time someone says lebov (love in Russian). This is even facilitated by the cast handing out cups of vodka during the performance.

But there are also some bizarre non-sequiturs, such as when a singer in what looks like a boudoir is given a mic and electric guitar to continue her performance. Though it provided a chuckle, the reason for that choice went over my head.

While the script tries to provide the context I mentioned, it simply can’t make up for what’s lost from the poem, and I couldn’t help feeling “left out” of the framework.

For example, according to one translation of the poem, Onegin’s house is described: “All of the rooms were wide and lofty/ Silk wall paper embellished the drawing room/ And portraits of czars hung on the walls / The stoves were bright with ceramic tiles / There was no need for these things at all / Because he would yawn with equal distraction / At an ancient pile or a modern mansion.”

This paints such a great picture of the lifestyle and ennui of the main character, but not one that I caught onto in the musical.

Besides detailed description of scenery, the poem delves extensively into philosophical discussions, particularly about love, that would come across far better on stage as verbal jousting rather than a sing-song.

Baila Lazarus is a freelance writer and media trainer in Vancouver. Her consulting work can be seen at phase2coaching.com.

If Canada wants to be an energy super power, it’s going to have to run some pipelines through some plays. Well, some pantos. Starting with Cinderella: An East Van Panto, now on at the York Theatre until Dec. 28.

As with the inaugural East Van Panto last year, which took Jack & the Beanstalk to strange and hilarious new heights, this Cinderella is only loosely based on the fairy tale. In this version, Ella – Cinderella is only a mean nickname given to her by her wicked step-hipsters (not a typo) – loses her mother in a tragic food truck accident. Her father directs his grief to improving safety standards and is awarded for his efforts with the Mike Duffy Food Truck Safety Award, or something along those lines. He falls in love with the Government of Canada representative who presents him the medal. Marriage soon follows, the father is offered a senatorship, which takes him to Ottawa, leaving his beloved Ella – played wonderfully as the straight man to everyone else’s wackiness by Donna Soares – in the hands of her stepmother.

In true panto fashion, Ella’s new family is played by Allan Zinyk as the matriarch and Josh Drebit and James Long as her sisters. As they order Cinderella about, the audience gets to boo every meanness, and cheer Cinderella’s every win. While Jewish community member Drebit ably pulls off the fishnets, his comedic talents really shine as Feral Cat. Drebit, Long (as Rat) and Dawn Petten (as Old Crow) are about as far away from Disney cartoon birds and other forest animals as one can get, but “the other vermin,” three young actors as mice, are absolutely adorable – and, in a panto, the audience is allowed to “ooh and ahh” at their cuteness.

Zinyk also plays bad guy Ronald Grump, costumed in a business suit and an awful wig that’s only marginally worse than that worn by the character’s inspiration, Donald Trump. King Grump decides to hold a ball (there are lots of ball jokes, FYI) to celebrate the opening of Grump Towers (plural, even though there’s only one). At the ball, there will be a beauty pageant – a speed-dating marathon, actually – to find a wife for his son, played by Petten channeling Justin Bieber. (Petten also plays the hippy narrator/canvasser, Len Til, to perfection.)

And this brings us back to pipelines, and the spills that the suit-wearing, hard-hatted forewoman notes “only happen in movies and on the news.” As the chorus (pipe)line is passing through Cinderella’s family home, sadly, there is a spill – a spill that Cinderella must clean up before she can go to the ball. With the help of her vermin friends and, in one of the funniest scenarios to be conceived, a vacuum-harmonica-playing David Suzuki (played by Zinyk, you have to see it to believe it) and her B.C. Ferry Godmother, the belle gets to the ball.

But does she marry her prince? You’ll have to go to the panto for the answer – and for all the witty, weird, Vancouver-specific humor, the inventive costumes (Cinderella’s gown appears like magic), the charming music, the fitting choreography, the inspired sets and props, the bold and beautiful backdrops.

With Cinderella, the creative team of playwright Charles Demers, musician Veda Hille and director Amiel Gladstone have improved on what was already an intelligent, silly, energetic, crowd-pleasing formula. The lead actors in this year’s production are joined by the very talented chorus of Bailey Soleil Creed, Sean Sonier (who rocks a tutu) and Alexandra Wever, as well as the children who share the roles of the mice.

If you’re wondering what to give that person on your Chanukah list who has everything, at least 99 percent of non-Grumps would enjoy this show. For times and tickets, visit thecultch.com or call 604-251-1363.