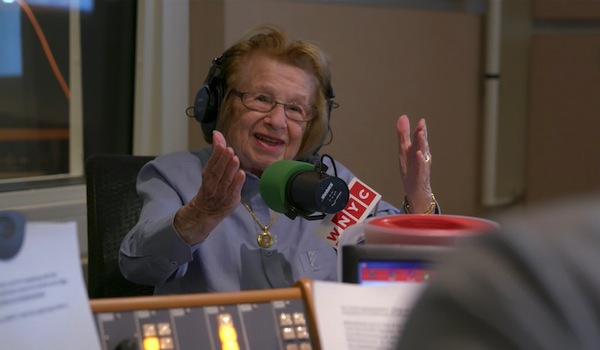 It was election week in Israel when I had the chance to speak with Ruth Westheimer. Though the noted sex therapist and celebrity Manhattanite served in the Haganah pre-state militia and is planning a trip to Israel in May, she didn’t want to talk politics. “It’s OK,” I told her on the phone, “just know that, as a political scientist, I don’t typically write about sex.”

She giggled in her contagious way, through her thick German accent – which, she told me, she’s lucky to have, since radio listeners always knew when Dr. Ruth was speaking.

Westheimer doesn’t like to talk politics, but in many parts of the world – and even in corners of North America – her topic of choice is a highly politicized issue. While completing her PhD in education and before training as a sex therapist, she worked at Planned Parenthood, an organization positioned on the front lines in the reproductive-choice wars in America.

Indeed, she had just returned from addressing a Planned Parenthood convention in Las Vegas when we spoke a few weeks ago. She said she was adamant that kids need to talk more about menstruation – especially since the onset of puberty is coming earlier for some – and nocturnal emissions. (Side note for the parents out there: My own personal introduction to the topics of periods and wet dreams was through Judy Blume’s excellent books.)

Talking is, of course, key to Westheimer’s trade – and she sees talking about sex as essential to overall sexual literacy. We’ve made great strides, she told me. In the United States and Israel, for example, there are now fewer women who are left unsatisfied due to not being able or willing to communicate their sexual needs to their partner. And, for men, premature ejaculation is also on the decline. Did she want to share advice for readers on that particular problem? It’s in her books, she told me. For those who are interested, I poked around (no pun intended) and found this entry on Dr. Ruth’s online encyclopedia of sex. Hint: It has to do with getting intimate with one’s “moment of inevitability.”

She had some strong words for the founder of psychoanalysis, Sigmund Freud, a favorite punching bag for postmodern intellectuals. “Freud said that any woman who doesn’t have an orgasm during intercourse is an immature woman,” said Westheimer. “He did not know that the clitoris needs to be stimulated in order to have an orgasm.” Instead, she added, “Freud should have taken a class with me.”

As she prepared to give a talk at the Israel Bar Association convention in Eilat, she said she was keeping in mind a talmudic adage: “A lesson taught with humor is a lesson retained.” She was pleased that after the seriousness of discussing legal matters, the conference delegates will be able to have some fun. But she “probably will not tell them to have good sex that night,” because “I don’t think they are there with their partners. I am old-fashioned and a square, and I’ve remained that way.”

Her squareness extends to trends like casual sex, which, she argues is not in people’s best interest, pointing to the increased risk of contracting HIV and other sexually transmitted diseases: “It’s dangerous.”

Yet, there is one area in which critics might call her politically incorrect: the hot-button issue of seeking overt consent before engaging in sexual activity.

“I do not believe that when partners are naked they can say at any time ‘I changed my mind,’” Westheimer planned to tell the lawyers at the convention. “In the Talmud, they say, when that part of the male anatomy is aroused, the brain flies out of the head.” In other words, she added: “It’s nonsense to suddenly, at the height of sexual arousal, say ‘I changed my mind.’ It will lead to many more problems. The idea of consent is nonsense – except consent before they are naked in bed.”

I didn’t press her on this point, except to ensure I’d heard correctly. But I did pause to mull over the current wave of youthful activism on this topic in my own province of Ontario, where a couple of teen spokespeople have been pushing the premier – with an apparently positive response so far – to add issues of consent to the new sex-ed curriculum.

Approaching 87, Dr. Ruth wants the world to know that she “feels great.” She has three new books coming out and she continues to teach courses at Columbia University, following a stint at Princeton.

What is her proudest accomplishment?

I ask. Her four grandchildren, she tells me. “Hitler lost, and I won.”