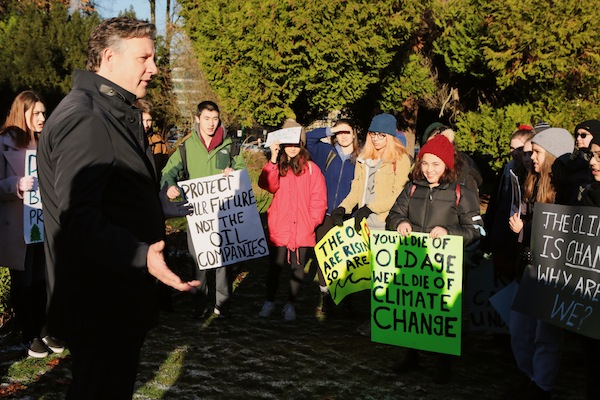 “It’s going to be our future, so it’s up to us to take it into our own hands and show that, even if we can’t vote, we can still make a difference in our communities and the world,” Malka Martz-Oberlander told the Jewish Independent when she and fellow activist and friend Rebecca Hamilton met with the paper to discuss recent – and future – efforts to draw awareness to the climate crisis.

The two high school students are part of the group Sustainabiliteens, which was inspired by Swedish climate activist Greta Thunberg. Last year, Thunberg started monthly school strikes, stating that preparing for a future that won’t have a livable climate was pointless. The strikes, called “Fridays for Future,” have spread to at least 270 countries, including Canada.

Inspired by Thunberg, strike action took place at Vancouver City Hall on Jan. 16, the day that Vancouver city council unanimously passed a motion put forward by Councilor Christine Boyle (OneCity) to declare a climate emergency. Similar motions have been adopted in other cities, including London, Los Angeles and Oakland, but Vancouver is the first in Canada to do so.

“Climate change is already impacting the people of Vancouver and will continue to. We need to respond to this crisis urgently and compassionately with a path towards a more equitable society,” said Boyle in a release. “Adequately addressing the climate emergency won’t be easy, but we are a smart city, capable of doing difficult things.”

Hamilton was an organizer of the strike at City Hall, and the groups Force of Nature and Extinction Rebellion Vancouver also supported the action. There was a previous school walkout and strike for the climate on Dec. 7, said Martz-Oberlander. She and Hamilton are among a growing number of Metro Vancouver teens coming together in what Martz-Oberlander describes as a “shared passion for climate justice.”

“With some of my friends, it’s just doom and gloom,” said Martz-Oberlander. “There’s this sense of this is all going to happen and no one can do anything, so why do anything? It’s out of our hands, we’re just kids…. But there’s also a lot of people that I know who are hopeful and see the bigger picture.”

“When I ask kids about the climate crisis,” said Hamilton, “they say that they think it’s a real problem and they’re scared. But the world around us doesn’t recognize what’s happening with the same sense of urgency that we feel. We are living in a confusing and weird time. On the one hand, we understand the science, we’re being told the scientific facts that we’re in a crisis. We’re being told these very conflicting messages, and there’s this dissonance. So what am I supposed to believe? The world is just going as normal, but why are you telling me then that we’re in this crisis and everything needs to change? I think that’s really frustrating. Me, personally, every day I’m frustrated by that.”

“In the Torah, it talks about needing to pass down this world better than we got it,” said Martz-Oberlander. “That’s the concept of l’dor v’dor, ‘from generation to generation.’ The Jewish teaching that really influenced me is the sense of responsibility towards future generations.”

“Camp Miriam was most important to me in cultivating my Jewish identity,” said Hamilton. “I think it played a huge role in what I’m doing and why I care about it. The focus on youth agency, being told we could create change. It’s tikkun olam – environmentalism and climate justice is the most important way to try and help other people and create a more just world.”

Both teens avoid the word “climate change,” preferring instead to talk of the “climate crisis” or “climate emergency” and the need for “climate justice.”

“I prefer climate emergency or climate crisis,” said Hamilton, who cites Jewish writer and activist Naomi Klein as an important influence on her thinking. “It’s not about preventing this catastrophe but about healing the foundation of our world. The climate crisis is a manifestation of these unjust worldly systems which exploit nature, animals and people, so fixing that manifestation will also mean fixing those systems.”

Hamilton and Martz-Oberlander were inspired to join the climate-strike movement after it came to Canada with a strike in Sudbury, Ont., led by 11-year-old Sofia Mather.

“I feel like I have been concerned about climate change my whole life,” said Hamilton, “but I began to want to do something when I realized that nothing else really matters if we live on a dead planet.”

Hamilton and Martz-Oberlander are currently preparing for a Canada-wide school strike on May 3, and have a local action planned for Feb. 15.