Simon Fraser University biologist Dov Lank with some of the ruffs he and his team have been studying. (all photos from SFU Communications) 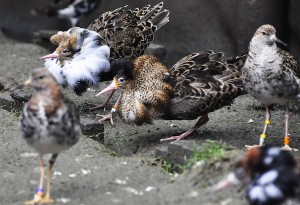 Simon Fraser University biologist Dov Lank and a team of researchers have identified the genes responsible for three different kinds of male ruff (Philomachus pugnax) – a species of wading bird. The ruff is the only bird species in which three kinds of males exist, each having its own approach to courtship and mating and with distinct physical characteristics. One is a fighter, the second is a “wingman” and the third is a cross-dresser. 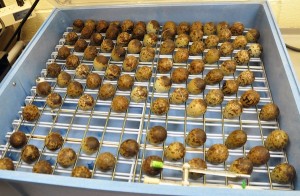 The paper, “A supergene determines highly divergent male reproductive morphs in the ruff” was published on Nov. 16 in Nature Genetics. Researchers found that, 3.8 million years ago, an inversion occurred in the chromosomes of the ruff, creating a second kind of male. Then, half a million years ago, a second chromosomal rearrangement between the inversion and the original sequence occurred, creating a third kind of male. As a result, there are three types of male ruffs: one with ancestral sequences, another with an older kind of the inversion and a third with a newer kind of inversion.

Lank said, “Today, we have the tools to identify exactly what genes are involved and, over the next few years, we will describe how they work. These genes control differences in aggressive behavior and the expression of gender-specific traits, and the pathways and processes involved will provide a model with general applicability for vertebrates, including ourselves.”