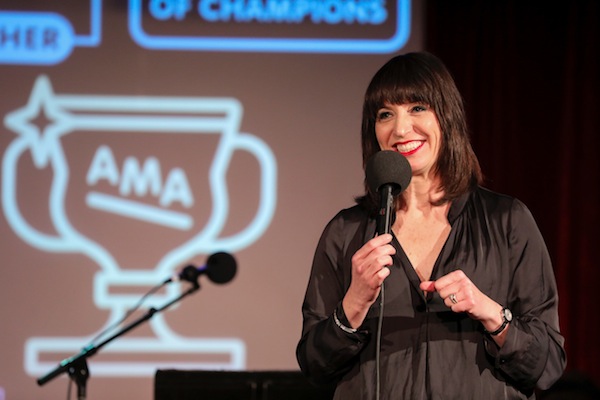 Live performances – that you can see in person – are, thankfully, a thing again. At least, for now. And this year’s Chutzpah! Festival, Nov. 4-24, features many shows that people will be able to attend, most of which will also be streamed digitally.

For the two artists the Jewish Independent interviewed this week about the festival, the upcoming performances hold special meaning.

“I am so looking forward to coming back to Canada,” said New York-based comedian and storyteller Ophira Eisenberg, who was born in Calgary. “And Vancouver at that! Where it all started.” Eisenberg performs Nov. 7 at the Rothstein Theatre.

Shay Kuebler/Radical System Art’s Momentum of Isolation sees its world première at the theatre Nov. 13 and 14. The dance company returns to Chutzpah! as resident artists. The Rothstein Theatre and Chutzpah! “have been critical to the growth of Radical System Art and my work as an individual artist,” Kuebler told the Independent, describing the theatre as “the cradle that supported us” during “our infancy as an organization.”

“When I stepped back into the theatre,” Kuebler said, “it was like being back in a close friend’s home. It feels right. There’s a groove and comfort there. This has enabled us to create with as much momentum as possible, both as a company and collective of artists.”

Stepping back into a theatre has been an emotional experience for many artists.

“This spring in New York, I performed numerous times outside,” said Eisenberg. “All of the situations were a little different and, a couple of times, the address of the show was a large tree in a park! It wasn’t ideal and definitely was challenging, but people really wanted to laugh and take in some live entertainment, so it was uplifting.

“My first real performance inside at a comedy club was in early May, when New York opened small performance venues,” she said. “The audience was distanced and masked, and I think they laughed louder and harder than an audience of 3,000 – or maybe my ears weren’t used to hearing live indoor laughter and it sounded explosive. Either way, it almost brought me to tears, and I know I’m not the only one that felt that way.”

Eisenberg comes to Vancouver soon after the final episode of National Public Radio’s comedy trivia show Ask Me Another, which she hosted for nine years, interviewing and joking with numerous famous folk, including Sir Patrick Stewart, Awkwafina, Ethan Hawke and Julia Stiles, among many others.

“After interviewing hundreds of celebrities, authors, musicians,” said Eisenberg, “one thing that stands out to me is that, whenever we talked about a project that meant a lot to an artist, they mentioned that what made that project so successful was the supportive environment – and the fact that they worked with people who allowed experimentation and even failure. That ended up bringing out their best work. I think about that a lot when it comes to creating a space for artists to truly succeed.”

Eisenberg has headlined and performed at countless festivals and appeared on numerous comedy networks and programs. She has her own comedy special, called Inside Joke, and her first book, Screw Everyone: Sleeping My Way to Monogamy (Seal Press), was optioned for a feature film. She is a regular host and storyteller with the Moth, an organization that has become a radio show and  podcast, in addition to putting on live events and other activities.

As for what she would still like to accomplish in her career, Eisenberg said, “I’m working on another podcast that I hope is also long-running! But I have so many things I’d like to do. Maybe too many things! On the docket are writing another book, and I’d love to write for TV. Performing live is my first love, so I’m looking forward to a safer world where that can happen more often.”

Eisenberg’s journey to success began at a young age.

“I truly believe I was drawn to New York as a child from watching Sesame Street!,” she said. “I went to McGill for university, where I got a bachelor’s in anthropology and theatre, then moved to Vancouver for a couple of years, where I tried standup for the first time.

“I was honestly too scared to move to New York,” she admitted, “so I moved to Toronto and spent five years performing and starting to understand my craft. Then, one day, I thought, ‘I need to move to New York now while I can still happily live with a futon and milk crate furniture.’ Two years after moving here, I discovered the Moth…. I love writing jokes, but I was working on other material that just did not fit into the standup mold. I found an outlet of expression at the Moth and in this short form storytelling, and I continue to pursue both.”

When asked to describe her connection to Judaism and/or Jewish community or culture, Eisenberg said, “I have a joke in my act that goes something like this: ‘I was raised Jewish in Calgary, Alberta, or so I thought because when I moved to New York I wondered, “maybe I was raised Protestant?” Everyone in New York is more Jewish than I am. My Puerto Rican neighbour knows more about Judaism than I do.’

“That is just a joke but living in New York is definitely the first time I felt surrounded by pervasive cultural Judaism. My father was the principal of the Hebrew school in Calgary but left that job the year I was born, so I went to public school. We still practised at home and went to synagogue during the High Holidays. As an adult, I’ve definitely been able to find my community here in Brooklyn, which is very wonderful and embracing.”

In 2018, before the pandemic sent us all into relative isolation, the United Kingdom appointed its – and, apparently, the world’s – first minister of loneliness, to address the problem as a public health issue.

“Right away, the title of ‘minister of loneliness’ grabbed me,” Shay Kuebler told the Independent. “There’s something very simple about it and it almost feels like a caricature, yet, when you think of someone whose entire work/career is to disrupt loneliness, it becomes deeply serious. When you read about isolation and loneliness, the gravity of this position becomes even more clear.”

The United Kingdom’s action was a catalyst for Kuebler, who noted, “You can now find multiple countries that have ministers of loneliness.”

The work Momentum of Isolation “speaks to a number of ideas around isolation and loneliness,” he said. “By doing so, I hope to open up greater conversations around the topic and maybe have audiences start their own exploration of the topic.”

Momentum of Isolation explores the theme both through physical isolation and social isolation, explained Kuebler. “These two points are explored through a number of different scenes, which make the show episodic in its structure, with some through-lines and arcs for characters moving all the way through.”

The work has turned out to be even more relevant than Kuebler initially thought it.

“Honestly, this show took on an evolution that I could have never projected,” he said. “The timing of our first full-company research period coincided with the closures and lockdowns across 2020. I knew that this project was important, and being forced into an online/isolated form of research was profound, to say the least.

“This isolated online research, which enabled one-on-one time with each of the company artists, created a well of material,” he said. “It was a format that was completely new, but something I found extremely valuable. While working with each artist one on one, I was simultaneously writing and composing music for the work. This not only led to a lot of new scenes and ideas, but it also distilled what was most relevant and necessary to say.

“For me, this piece was both a rediscovery and a reinforcement of what I hold most valuable. It has brought me back to how and why I want to create. I am grateful for this.”

For those unfamiliar with Radical System Art and dance in general, Kuebler added, “I know when we hear ‘dance’ and, especially, ‘contemporary dance,’ a lot of people can feel hesitant. I want readers and audiences to see this show as more of a ‘contemporary theatre experience.’ It brings together technology, design and multiple art forms around a very relevant – and timely – theme. It is something being made now, through many different artists and their many unique experiences…. With a collaborative approach to connecting with our audiences, we hope to create something new, relevant and accessible.”

For Chutzpah! tickets and the full lineup, visit chutzpahfestival.com or call 604-257-5145.