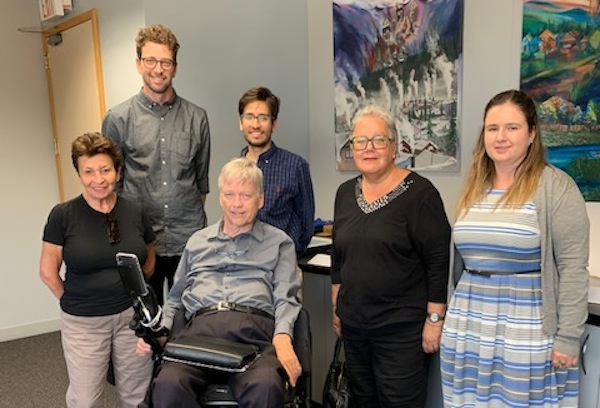 Israeli wines met Canadian cheese on March 8, when more than 100 people came together for a CJPAC (Canadian Jewish Political Affairs Committee), CIJA (Centre for Israel and Jewish Affairs) and Jewish Federation of Victoria and Vancouver Island reception in Victoria.

Attendance included four provincial government ministers – the Hon. Norm Letnick (agriculture), the Hon. Steve Thomson (forests, lands and natural resource operations), the Hon. Naomi Yamamoto (minister of state for emergency preparedness) and the Hon. Amrik Virk (technology, innovation and citizens’ services) – 28 members of the Legislative Assembly of British Columbia, 39 staffers and many community members, some of whom came to the event from Vancouver. John Horgan, leader of the Official Opposition, attended as well.

While an annual wine and cheese event is held at the federal level in Ottawa, this is the first year that CJPAC and CIJA have held the joint reception in British Columbia.

“It is critical that our community get involved in the Canadian political process, and events such as these help facilitate that engagement,” said Kara Mintzberg, CJPAC’s B.C. regional director.

CJPAC’s mandate is focused on getting the Jewish and pro-Israel community involved in the democratic process. As the advocacy agent of the Jewish Federations of Canada, CIJA’s mandate is to build and nurture relationships with leaders across the country, including in government, civil society and other faith and ethnic communities, in order to advance issues of common cause for the benefit of all Canadians.

“Events like the wine and cheese in Victoria allow us to bring members of our community together with provincial officials in order to deepen the excellent relationships our community has with our elected representatives,” said Nico Slobinsky, director of CIJA Pacific Region.

Guests at the reception sampled a range of Israeli wines and many B.C.-produced cheeses.

“I was delighted that a number of members of the board of the Jewish Federation of Victoria and Vancouver Island were able to be there,” said JFVVI president Dr. Aaron Devor. “Both CIJA and CJPAC do tremendous work and it’s exciting to see them focus their outreach on communities on the Island.”

“Although our organizations have different mandates, we are both working toward a common goal and we think these joint events are a great way to show the community what we have to offer,” she said.