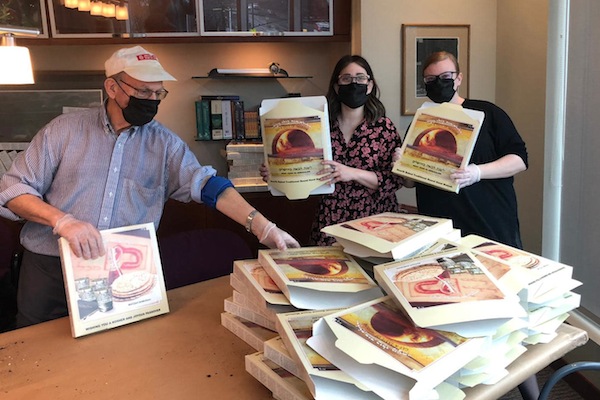 Ambassadors of Light putting together more than 2,000 packages of matzah at Lubavitch BC. (photo from Chabad Lubavitch of BC)

Ambassadors of Light in Kelowna. (photo from Chabad Lubavitch of BC)

“A little light pushes away a lot of darkness” – this quote from the Lubavitcher Rebbe (Rabbi Menachem Mendel Schneerson) was the impetus for the creation of a new program initiated by Chabad Lubavitch of British Columbia in response to the experiences of the last few years. These have included COVID-19, war in Ukraine, poor economic conditions and political upheaval, leaving so many in loneliness, depression and despair.

Ambassadors of Light is a year-long series of campaigns in commemoration of the Rebbe’s legacy and the 120th anniversary of his birth, which was celebrated in April of this year. It is designed to combat darkness and infuse the Jewish community of British Columbia – as well as other Jewish communities – with light.

The local project is a coordinated effort of the 10 Chabad centres serving the province. It is divided into six separate campaigns that encourage love and sharing, and doing mitzvot with friends and family. Each one is infused with creative materials to enhance the experience.

The first campaign began in March and extended through April, with distribution of Shmurah matzah for Passover. Each participant received free handmade matzah, an activities package and, most importantly, a second set to hand out to a friend. True joy comes when we “pay it forward”!

The second campaign, which took place over May and June, focused on the theme of Jewish books. Every Jewish home shines when it is adorned with books of Jewish learning, faith and prayer. People received the gift of a new Jewish book for their home library and one for a friend.

The current campaign is to ensure that every Jewish home in British Columbia has kosher mezuzot affixed to the doorposts of their homes. There are two parts to this campaign:

Part 1: First-time front-door mezuzah. Be an ambassador and introduce the gift of “Mitzvah Mezuzah” to a Jewish friend, co-worker or family member who doesn’t yet have one on their front door.

Part 2: See the Scribe. For those who already have mezuzot, bring them for a check-up to one of the in-person See the Scribe events. A certified scribe will be at various Chabad centres throughout the province for a full day, and he will be checking mezuzot for authenticity or errors. You will also have the option to book a time for the rabbi to come directly to your home to install your mezuzah – or you can take instructions on how to do it yourself. Check the website ambassadorsoflight.ca for the days, times and locations of these events.

The Ambassadors of Light initiative has already had an effect.

“Thank you for this wonderful gift before Passover. You’ve made our holiday so special!” said Igor, a student in Kamloops, who himself volunteered to become an Ambassador of Light. He distributed Passover matzah and other holiday goods to more than 20 more Jewish families in Kamloops through the campaign.

Rabbi Chalom and Esti Loeub from Chabad UBC shared, “One of our students’ parents (who we had never met before) received a gift of a Jewish book from their son. They were so impressed by the concept that brought their son to share Judaism with them in a creative way … and they loved the book about fascinating Jewish concepts.”

In Okanagan, Rabbi Shmuley Hecht received the following text: “Hello Rabbi Shmuley…. I took only one of the books on Jewish living, but, on reflection, I would like to get another four, if possible – one for each of my children.”

“Now, as we begin the third of six sweeping education and sharing themed campaigns of the Ambassadors of Light program, the impact is growing and the feedback is enormous,” said Rabbi Dovid Rosenfeld of Lubavitch BC, one of the team members leading the project. “People care, and people are being cared for. The circle continues to revolve, turning each recipient into a giver as well.”

Rabbi Yitzchak Wineberg, head director of Chabad Lubavitch of B.C., noted, “The sense of unity that this Ambassadors of Light program has created is incredibly heartwarming … and very telling. People are just so touched by the surprise gifts they’re receiving from their own fellow community members, and that is something that the Rebbe has been encouraging throughout the years as well.”

All in all the project has reached more than 70 cities, attracted more than 200 volunteer ambassadors and impacted thousands of people. Still to come are the shofar and lulav campaign, the menorah campaign and the Shabbat candles campaign.

To become a part of the program, contact your local Chabad. For details, visit  ambassadorsoflight.ca.