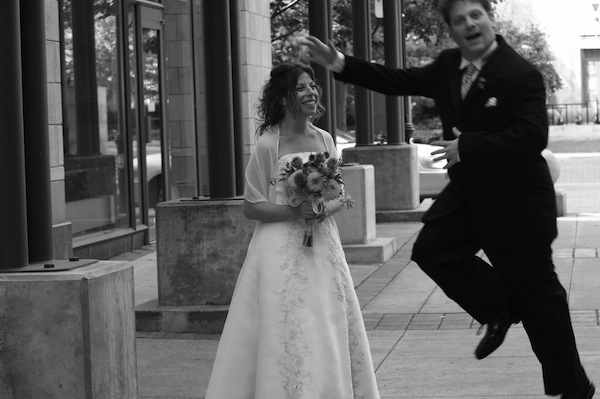 A moment of levity during the taking of Justine and Stewart Silver’s wedding photos. (photo from Justin Silver)

The late Stewart Silver was born and raised in Montreal. He had worked as a standup comedian, and moved to Toronto in hopes of furthering his career. Justine Silver grew up in a Houston suburb. In late 1990, she followed her sister, who had moved to Toronto, and, there, she joined Jewish online dating site Jdate. So had Stewart.

“There was a thing where you had to describe your perfect date,” recalled Justine. “Profile after profile included long romantic dinners and were all gushy and gross … but his said, ‘Yeah, after we grab a drink, we step out of the restaurant and trip over a big bag of money.’ I was like, ‘Oh my gosh … that’s the perfect date!”

The couple took their time getting to know each other and, after a year and a half, got married.

To all appearances, Stewart was a healthy 44-year-old. He had biked up hills in Christie Pits Park the day before he had a fatal heart attack while the couple was having a conversation on Nov. 16, 2011.

Left shocked and widowed, Justine embarked on a healing path, including taking a hiatus from her event-planning business.

“It’s been quite some time since then and there’s been grief bursts,” said Silver. “In the early days, there was a lot of therapy and some peer support groups. Then, I found Camp Widow and have been to a few of those. I was pleased it wasn’t at all associated with any religion and was welcoming…. There was one in Tampa, and so a couple of widow friends that I had met up with, here, in Toronto, in a peer support group for young people who’d lost their spouses under the age of 55 … decided to make a whole trip of it. We went to the beach, museum, and then to Camp Widow. It’s a very transformational experience when you feel that you’re surrounded by people who understand the topsy-turvy world that you’re starting to barely understand yourself.”

The first camp Silver went to, in Tampa, was in the spring of 2018. Then, in November 2018 and November 2019, she attended the camps in Toronto. She and her friends have already signed up for the next November 2020 camp in Toronto.

While it’s called a “camp,” the weekend is more like a conference, with people coming together for sessions on various topics.

“One of the neat things I like at Camp Widow is that the name tags, everyone has one, but there are a couple features to it,” said Silver. “One of them, there’s a ribbon at the bottom. For example, in my work as an event planner, if you’re a presenter, your ribbon will say ‘presenter,’ or, if you’re on the organizing committee, it will say ‘organizing committee’ or ‘volunteer.’

“But, these [also] have the number of years ago that your loss occurred. So, for me, that was six years. So, let’s say it’s a teal ribbon. All of a sudden, you notice the six-year people … and there’s a bond, because you’re in a different place than, say, the six-month people. Everyone is compassionate to everyone else, but it’s just a really interesting way to bond with people.”

As far as the camp schedule, there are some group meals, as well as meals on your own. There are various types of sessions offered.

“There are tracks, like for people who are five years out, one year, or one to five,” said Silver. “I can’t remember the exact breakdown, but you can decide to go to everything along a certain track, or you can decide in the moment what you’ll do, which sessions you’ll go to. Then, there are some networking evening events, different ways of getting to know people.”

One is designed like speed-dating, but not for that purpose. You get the chance to talk to someone for a certain amount of time, and then you move on to the next person and chat with them. “It’s really interesting to see where the commonalities fall,” said Silver.

On Saturday night, there is a banquet with a theme and people dress up – some participants may not have gone out since their loss. After dinner, each person says the name of their loved one out loud, while some 200 others quietly listen. Then, there is a dance, which gives the opportunity to destress and socialize. The DJ doesn’t play any music that could potentially trigger anyone’s grief, like slow songs.

At the camp, there are people from their mid-20s to people in their 70s and 80s; people from all religions, cultures and political leanings.

For Silver, Camp Widow “creates community and support amongst widows and widowers…. Sometimes, when you’ve lost someone, it can be very isolating, which can be in different and unexpected ways. I wouldn’t say never, but it doesn’t go away. The intensity definitely lessens and you find new ways to live with grief. And there are plenty of people who, we say, are ‘re-partnered.’ When you’ve been widowed and then you meet someone else and you have a boyfriend/girlfriend, wife/husband or partner, we say you’re ‘re-partnered,’ because we don’t think that means you’re not still widowed.”

The camp provides tools and connections that widows and widowers may not otherwise find on their own.

“I feel camaraderie in sharing my story and being heard, or hearing someone else’s story and being helpful to them,” said Silver. “At this past Camp Widow, I did an art thing. I can do crafty things OK, but I’m not really an artist. But, one of the workshops I went to was all about healing through art and it was just a whole different facet. We all had paint and they set it up so well…. We had a white piece of paper and I got white paint and I painted a white heart. Then, I put a line through it – a squiggly line, like it was broken – and you could barely see it … like you couldn’t see that my husband had a heart problem…. Then, everyone shared in the room what theirs was about. When you do that, it’s like opening up a wound, and then the scar heals better next time.”

Six months ago – eight years into her healing journey – Silver and her older sister, Eileen Jadd, who is a social worker, started the charity Good Grief Bereavement Healing Services.

“We have a roster of counselors in different parts of Toronto for bereaved people,” said Silver. “We’re also offering workshops on eye movement desensitization, which is a thing for trauma victims. It really helps you compartmentalize the trauma, so you can talk about it without being retraumatized. So, we’re doing a workshop on that.

“We’re starting a group on sibling loss and, eventually, will have a physical building. We want to have a centre, so people who’ve lost someone, it’s like a snap of the fingers and they’ll know where to go. When you know there’s an accident, you know to dial 911. We want it to be, ‘Wow, you’re in need, you’ve lost someone, and you know exactly where to go.

“I think widows and widowers need their person’s name to be said. People are so afraid of saying it, because they don’t want to bring it up in fear. But, they want their names to be said, so that’s a big part of it. I happen to talk about Stewart all the time, but a lot of people don’t have those opportunities in their own lives.”

In addition to talking about him when memories arise, Silver said, “Every year, I go to shul and I say his name and a prayer for him, and commemorate it that way. I remind people that we got married in that synagogue, and I remind people that he was a person that existed and stood in that space with me, and that his influence is still there. Just because he’s not standing next to me in that moment … he’s still there. In those ways, we talk about him.”