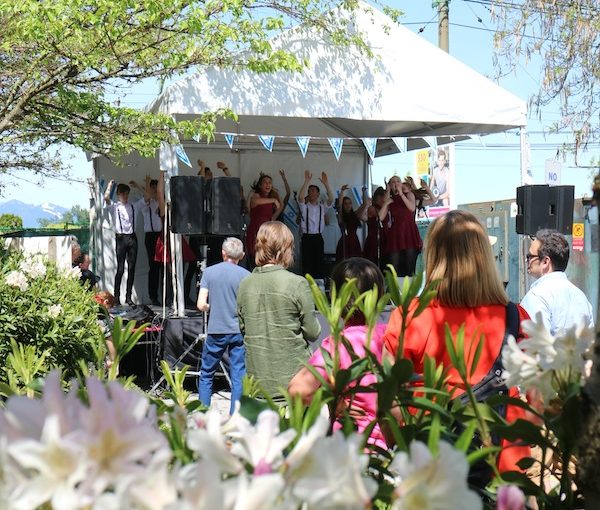 The Jewish Community Centre of Greater Vancouver invites the entire community to its annual JCC Festival Ha’Rikud. The theme this year is “Seasons of Israel,” with a variety of programs to inspire, inform and entertain visitors. The highlight of the month-long celebration, which runs May 9-26, will be the outdoor community fair.

Beginning at noon on Sunday, May 12, the JCC parking lot will be transformed into an Israeli street fair with food trucks offering shwarma, falafel, vegan Middle Eastern choices and other popular treats; a marketplace (shuk); live music performances; family activities; dancing and more. Admission is free and everyone is welcome.

For Israeli dance lovers, there will be two shows in the Rothstein Theatre, at 1 and 3 p.m., featuring Orr Vancouver dancers and visiting performers from Mexico and Miami. For foodies, there will be a presentation at 5 p.m. by Gil Hovav, a leading Israeli culinary journalist, author, TV personality and speaker.

Other festival events include a group art exhibition in the Zack Gallery, which opens May 9; Israeli recreational dance workshops May 10-12, hosted by the Vancouver Israeli Folk Dance Society; an evening of poetry inspired by the artwork in the gallery, on May 16; and an Israeli song sing-along on May 26. Visit israelifestival.com for the complete schedule.

The newly formed World Jewish Heritage Fund (WJH) recently unveiled a planned global digital platform to protect and promote Jewish cultural heritage around the world during an event at the haute Israeli eatery Balaboosta in the heart of New York’s Soho neighborhood.

WJH founder Jack Gottlieb, an American expatriate based in Tel Aviv, introduced the ambitious project at the trendy restaurant on Jan. 14 night with the e-book Israel’s Top 100 Ethnic Restaurants serving as a digital appetizer to a wider menu of planned technology, including mobile applications, that will put the power of online, collaborative communications in the hands of the Jewish community to preserve Jewish heritage.

“We decided that what was needed was a kind of UNESCO for Judaism,” Gottlieb said. “Think of us as a cross between UNESCO, Wikipedia and Trip Advisor, with Jewish heritage and culture being the unique components tying it all together.”

Gottlieb founded the WJH as a nonprofit to preserve and protect the world’s Jewish heritage sites after he realized that no other organization was solely dedicated to that mission. After a trip to see Jewish sites in Belarus and Ukraine, Gottlieb said he realized “they had no voice; no one knew about them and they were falling into disrepair. I thought, ‘Can we do something about this?’” he said.

So, Gottlieb set out to build what he calls the World Jewish Heritage Preservation Model. “Using digital-tourism tools in order to push more and more visitors to Jewish heritage sites and cultural events will create incentives for countries, local authorities and organizations to keep preserving and investing in their Jewish heritage assets, which will further promote tourism to these sites and events, creating an eco-system of Jewish heritage tourism,” he explained.

The first type of heritage the organization is set up to preserve is Jewish culinary heritage, via its new e-book about Israel’s hidden ethnic culinary gems, and an e-book series to follow, about Jewish cuisine in North America and Europe. “We chose food as the first aspect of our heritage we’re trying to preserve, as it represents such an important part of our culture,” Gottlieb said. “It’s the stories behind the food, and behind the people who make it, that are the gateway to so many other aspects of our heritage.”

WJHtravel, a travel app, is currently in beta testing, and is available at the App Store; the WJHpedia, a community-based resource, fully integrated with both the app and the e-book, is available online for users to share their experiences of Jewish heritage travel all around the world.

To help celebrate the event, Balaboosta offered classic and modern Israeli foods, like fried olives, mini falafel, kubeh, bourekas, Moroccan carrot salad and a lemony cocktail made with arak. Also telling the WJH story was Israeli food critic, author and TV personality Gil Hovav, who regaled a crowd of food bloggers and other foodies with stories about his life in Israeli cuisine.