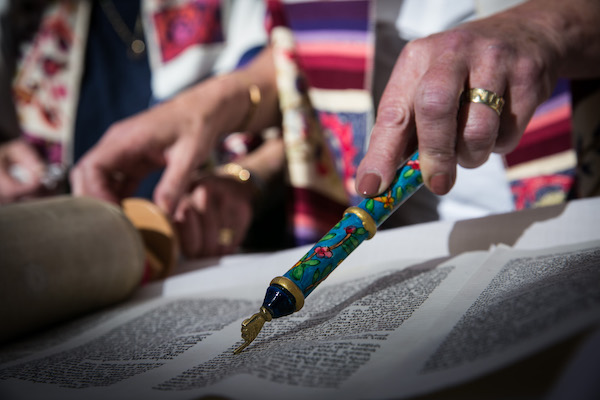 For the last few decades, she said, scholars have gone back into the text and started digging to find hints and remains of ancient goddesses. By goddess, Caine means the “sacred feminine.” The scholars search the texts to see if they can unveil clues, much like archeology, which will allow them to tell different stories than the ones that have already been told.

“It’s not that the researchers find the old stories useless; rather, they see it as just one part of the whole. To expand the story, the researchers pose questions, such as what did women believe in, how did they worship, and what were their lives like and what did God look like to them at that time?” Caine explained. The text is reinterpreted, and turned into commentaries and midrashim. As an example, she introduced the audience to two recent books: Dabri Torah: Israeli Women Interpret the Torah (published this year, in Hebrew) and Torah: A Women’s Commentary (WRJ Press, 2008).

Throughout her talk, Caine wove connections of Asherah, the mother goddess in ancient Semitic religions, to the heroines of the Torah, such as Sarah and Eve (Chava). Asherah is perceived as hiding within the texts. (Asherah, too, was connected to the Tree of Life, which, in images shown during Caine’s presentation, resembled a menorah.)

One midrash highlighted in the talk related to the Binding of Isaac. In it, Sarah goes and spends the night with King Abimelech. She does not sleep with him but still comes back pregnant, leaving Abraham furious. He hears voices telling him he must kill his son. As he raises his hand to slaughter Isaac, suddenly he sees a deer in the bushes.

This is interpreted as the moment of transition into patriarchy. The deer represents the mother goddess who wants to save her son. “As Sarah dies right after the Akedah, she perhaps does so to save her son,” Caine said.

On the subject of Eve, Caine quoted Rabbi Rachel Adler: “the world of patriarchy cries out for mending. A mending world would commit itself to equality and power sharing, to working collectively to fulfil needs and solve problems. Reunited again with the rest of Creation, men and women could learn again to be loving friends as the traditional rabbinic wedding blessing portrays them.”

Caine pointed out that Adler – through her rereading of the text and reinterpreting what a Jewish relationship is about – restructured the Jewish wedding ceremony. She took the Jewish language of covenant into the ceremony and not kinyan, which implies taking ownership, and created a brit avuhim, or lovers’ covenant. (See ritualwell.org/ritual/brit-ahuvim-lovers-covenant.)

Lastly, Caine spoke about a project, led by Israeli-American artist Yael Kanarek, to rewrite and regender the Torah, i.e., a male in the traditional text is now referred to as female and vice versa. Though the story remains the same, there would now be, for example, a female Jacob with 12 daughters and four husbands. “Suddenly, we have a mirror image of Torah,” said Caine. “It’s very interesting to read it and the immense midrash that it creates for Torah, as well as for our own understanding of who is telling the story and who is part of the story.”

When looked at this way, Caine said, new things come up and are discovered in Torah. By finding the sacred feminine in the texts, she said she is able to understand how she relates and could be part of the process of studying Torah.

“It’s part of a larger question of how do we heal our tradition and take a Judaism that seems at times very disconnected from the earth. By being able to access the language of goddess, it has enabled me to reimagine and to rethink how I do ritual and Judaism, and how I do everyday life – that aims not at the goddess at all – and create a Judaism that speaks to us now in our lives today.”

Born and raised in Jerusalem, Caine graduated the Hebrew University with a master’s in contemporary Judaism and received her rabbinic ordination at the Hebrew Union College-Jewish Institute of Religion’s Israeli program in 2011. Her rabbinic thesis explored liturgical, spiritual and ceremonial aspects of birth in Jewish tradition and contemporary practice. Stemming from that, as well as her years as volunteer at a rape crisis centre, she is one of the founders of the Israeli rabbinic women’s group B’not Dinah, creating a female and feminist rabbinic tradition of healing after sexual trauma.

For more information about Beit Toratah visit beittoratah.org. To register for the next Building Bridges lecture, go to kolotmayimreformtemple.com.