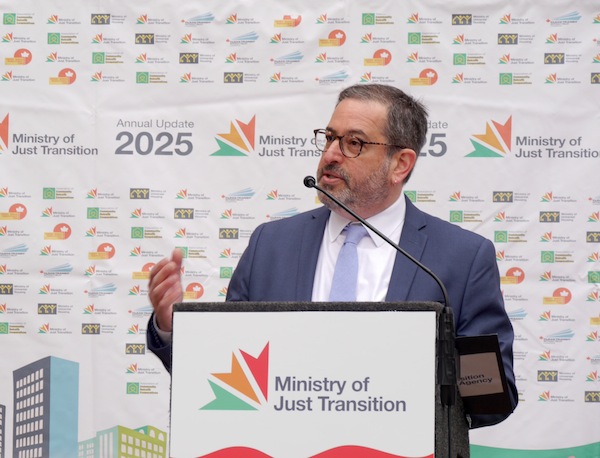 Seth Klein speaks at the Press Conference from the Future on March 12. (photo by Lorne Mallin)

On March 12, hundreds turned out for a creative event that imagined what could be accomplished by 2025 with climate movement leaders in government.

“With the money that would have gone to piping some of the worst oil in the world to the West Coast, we have instead unleashed a wave of investment in healthy people and healthy land,” Kukpi7 Judy Wilson told A Press Conference from the Future in front of Vancouver Public Library’s central branch.

Wilson, secretary-treasurer of the Union of British Columbia Indian Chiefs, was speaking as if the twinning of the Trans Mountain (TMX) pipeline had been scrapped in 2023 and a TMX reparations and healing secretariat had been created.

The press conference event was under the banner of a fictional ministry of just transition presenting an update on new programs and institutions slashing pollution, creating meaningful work, and addressing injustice and inequality in energy, Indigenous rights, housing, transit, public health and more.

Klein, author of A Good War: Mobilizing Canada for the Climate Emergency, spoke as chief executive officer and commissioner of the fictional Just Transition Transfer Agency. “Winning [on emissions reductions] also means leaving no one behind,” he said, “especially the regions that have long relied on revenue and jobs from oil and gas.”

Klein said that, like the Bank of Canada’s qualitative easing policies in the first year of the COVID-19 pandemic, the just transition could be financed in a similar way.

“Most of that year, the Bank of Canada was buying up federal government securities to finance the COVID emergency response to the tune of $5 billion every week for a year,” said Klein. “Once we embedded our climate emergency goals within the mandate of the Bank of Canada, the bank proceeded to do this again for a mere four weeks a year, generating $20 billion for climate and just transition programs.”

Lewis said his government is committed to climate action, having carefully studied the conditions and capacities of Canada’s advanced industrial economy. “We conducted an inventory of our conversion needs to determine how many heat pumps, solar arrays, wind farms and electric buses we needed to electrify virtually everything and end our reliance on fossil fuels,” he said.

Lewis encouraged the audience to make the future presented in the event happen. “Do you want to live in this future? Are we ready to fight for this future? Because this future we described here today is the work of all of us – the fruits of our imagination and struggle – and that’s what we came here today to commune around: the future we can build together.”

Manuel, portraying the chair of the land back secretariat, updated progress of an imagined Land Back Act, whose goal is “to reverse the land theft that underlies the colonial nation state of Canada. That means that 80% is being systematically returned to Indigenous jurisdiction.”

After the speakers, and entertainment by the Carnival Band, volunteers engaged members of the audience on their thoughts and feelings about the climate emergency.

“The Just Transition Act is the most important missing piece of climate legislation in Canada and it needs to pass this sitting of the House of Commons,” said Katie Rae Perfitt, senior organizing specialist with 350.org, one of the press conference’s sponsoring organizations.

“We cannot tackle the climate crisis without rapidly phasing out fossil fuels,” said Perfitt. “Canadians deserve immediate action from our federal government to make that shift happen in a way that puts workers and communities first.”

– Courtesy A Press Conference from the Future ogranizers 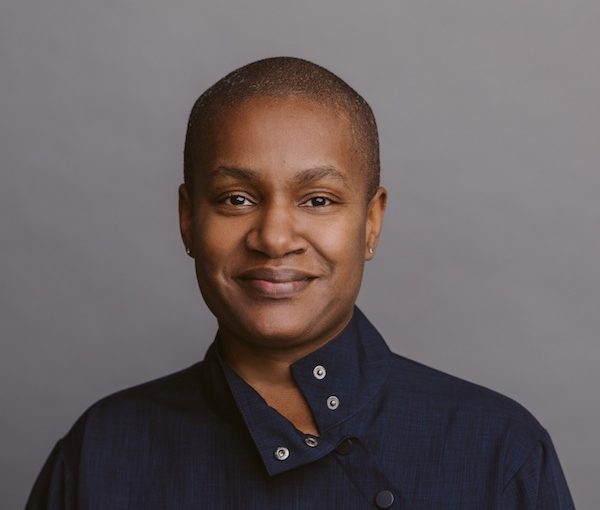 British Columbia’s comparatively small Jewish community has produced a number of senior political figures, including the province’s first Jewish premier, Dave Barrett, and the current minister of finance, Selina Robinson, and minister of environment and climate change strategy, George Heyman. In this federal election, there appear to be just two candidates in British Columbia who are Jewish.

Tamara Kronis is the Conservative Party of Canada candidate for Nanaimo-Ladysmith. The riding is being closely watched by national observers as it is home to one of only two Green party MPs. Paul Manly, the incumbent, once sought an NDP nomination but was rejected by the party, apparently due to controversy over his positions on Israel and Palestine. While the other Green MP, former leader Elizabeth May, is seen as safe in her riding of Saanich-Gulf Islands, Manly appears to be in (at least) a three-way race with Kronis and New Democrat Lisa Marie Barron. Michelle Corfield is the Liberal candidate.

Kronis is a lawyer and heads a jewelry manufacturing and retail business. Until last month, she was associate chair of the Ontario Human Rights Tribunal and an independent director of Toronto Hydro. Earlier in her career, she served as director of advocacy for EGALE Canada, the national LGBTQ+ organization. She was a trial assistant at the International Criminal Tribunal for the former Yugoslavia.

Across the water and across the spectrum, Avi Lewis is the New Democratic Party candidate in West Vancouver-Sunshine Coast-Sea-to-Sky Country. A scion of Canada’s left-wing dynasty, Lewis is the son of journalist Michele Landsberg and Stephen Lewis, a former Ontario NDP leader and Canadian ambassador to the United Nations. His grandfather, David Lewis, was the leader of Canada’s NDP, from 1971 to 1975.

Avi Lewis is a journalist and activist who recently produced and co-wrote the Emmy-nominated animated short film about the Green New Deal, Message from the Future, with U.S. Representative Alexandria Ocasio-Cortez.

Lewis co-authored “The Leap Manifesto,” which was “a call to action on climate and inequality that was launched by an historic coalition of Indigenous leaders, unions and environmentalists, and signed by more than 50,000 Canadians,” according to Lewis’s website.

Lewis has an uphill climb. The riding, which straddles some of Canada’s wealthiest voters and the disparate communities along Howe Sound, has back-and-forthed between the Liberals and Conservatives in recent years. It is held by two-term Liberal MP Patrick Weiler, who is beating back a challenge from former Conservative MP John Weston. In 2019, the NDP candidate came fourth, well behind the Green party.