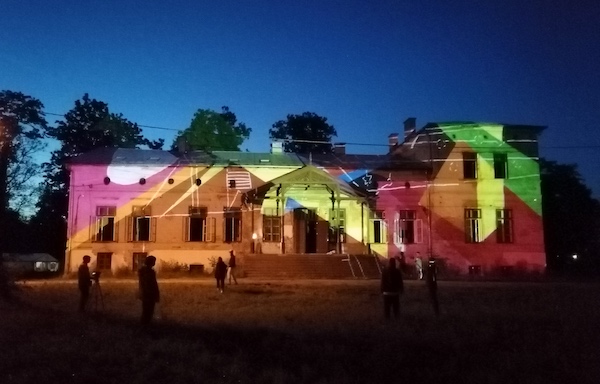 A scene from Site: Yizkor as it was performed in Sichów Duży, Poland, this past June. (photo from Chutzpah!)

Site: Yizkor is both an intensely personal work and a powerful, universally meaningful work. It is ever-changing and spans the past, present and future.

“For me, this project is a gesture of healing,” co-creator Maya Ciarrocchi told the Independent. “My goal for audiences and participants is that, through the process of shared commemoration, we may put aside our differences and look towards a reimagined future.”

Part of this year’s Chutzpah! Festival, Site: Yizkor is a collaboration between Canadian multimedia artist Ciarrocchi and American composer Andrew Conklin. It is an evolving “interdisciplinary project [that] explores the physical and emotional manifestation of loss through text, video and music.” It is an installation (of video, prints and drawings) and a performance, and includes workshops “where participants are invited to create their own Yizkor pages as a way to mourn and commemorate lost people and places.”

“Yizkor books are documents written by Holocaust survivors to commemorate the villages they lived in before the Second World War,” explained Ciarrocchi. “They capture the spirit of these places by describing the day-to-day life of their Jewish citizens. They include lists of the Jewish residents, the structure of political systems and where the best shopping could be found. They also include photographs and maps of the villages drawn from memory. They document a time and place that no longer exist but the traces of which are visible in the contemporary landscape.”

In introducing the project to workshop participants, Ciarrocchi said, “I tell them that, while Site: Yizkorexamines displacement through the lens of Yizkor, which is an inherently Jewish framework, the project is not limited to the Jewish experience. Site: Yizkor is centred on creating a space for shared commemoration and the universal experience of loss.”

For the local presentation, Conklin works with a local string quartet for the performance, while Ciarrocchi creates “video projections for the performance that include references to the known and erased histories of Vancouver,” and installs the exhibit in the gallery. She leads the workshops, which include both Jewish and non-Jewish community groups, and participants “are invited to read their text as part of the performances or share them as written documents or drawings as part of the exhibition.”

Site: Yizkor has been presented in New York City and in San Francisco. In June of this year, it was presented in Poland, from where Ciarrocchi’s maternal grandfather immigrated to Canada; Ciarrocchi was born in Winnipeg.

The project began in 2018, when Ciarrocchi was a fellow in the Laboratory for Jewish Culture program in New York City. “At the time,” she said, “I was working on a series of drawings depicting former Polish and Lithuanian wooden synagogues layered with memory maps sourced from Yizkor books. As part of the project, I gave a performance lecture where I read passages from Yizkor books, accompanied by projections of my drawings, maps and photographs from Yizkor books. I concluded the performance by prompting the audience to ‘describe a vanished place of personal importance.’ I collected these texts, and they were incorporated into future performances.”

She met Conklin around when she was in residency at Millay Arts in upstate New York. “He expressed interest in using my drawings of maps as a musical score,” she said. “We then started working on a sound/video project comprising his compositions and my animated maps and drawings.”

In 2019, Ciarrocchi was invited to attend an international meeting of interdisciplinary artists in Poland.

“The group gathered in Sichów Duży, a rural area not far from Staszów, a small town that was once an important centre of Jewish life,” said Ciarrocchi. “The site once belonged to an aristocratic family who lost their lands and titles during the Second World War. The buildings had been restored except for one and, one evening, I projected the video on its surface and played Andrew’s music from speakers inside. It was then I knew that I needed to return to this place and present the work live with musicians inside the structure. In June 2022, after three years, a pandemic and a war, I returned to Sichów with a team of musicians from the U.S., Germany and Poland. We presented Site: Yizkor inside the ruin to an audience comprised of Ukrainian refugees who were being housed on the site. The following week, we presented Site: Yizkor in another ruined manor home outside of Kraków. That iteration included dancers as well as musicians.”

It was an emotional experience.

“Gratitude and relief,” said Ciarrocchi about what she felt afterward. “Gratitude to Andrew and the incredible team of performers we assembled and to the funders who supported the work. Relief after all the planning and delays that we were finally able to bring the work to Poland. It was also exciting to see the project come together so beautifully. In many ways, my first research trip in 2019 was where I felt all the sadness and grief. This year, I was too busy to let myself go into the dark crevasses of my emotions. In 2019, though, I spent most of the three weeks I was there crying. I visited my grandmother’s shtetl, which was incredibly powerful. While sitting on the ground in the old Jewish cemetery there, I released all my grief. Poland is filled with ghosts. One does not help but feel their presence.”

It is in this context that the question asking workshop participants to “describe their dreams of the future” was added to the project.

“I added this part of the prompt in Poland,” said Ciarrocchi. “I realized that, understandably, so much of the Jewish experience there is about memory and the past. I’m two generations removed from the Holocaust and, while its effects are written into the code of my body, I am also interested in how we create something new from the residue of this loss. This also comes from these past years of the pandemic, when there has been such a huge loss of life. We’ve had to reimagine how we live now and in the future.”

The performance and exhibition of Site: Yizkor in Vancouver is the Canadian première of the work.

For a recent grant proposal, Ciarrocchi wrote about the première, “This event will also be a coming home. Site: Yizkor is rooted in research into the land and architecture of a place in relation to the known and mythological histories of my ancestors who fled Poland and Lithuania before the Second World War. My ancestors emigrated to Canada to form a new life for themselves and their descendants. On the surface, their story is one of success. My great-grandfather was a seminal figure in Winnipeg’s garment industry, and my family still benefits from his accomplishments. This story belies how the effects of trauma and displacement have persisted from their origins in Eastern Europe so many decades ago. Forming cross-cultural connections through Site: Yizkor’s performance and workshop model, first in Poland and now in Canada, irrigates ancient inherited wounds.”

Site: Yizkor is co-presented with the Zack Gallery and in partnership with the Vancouver Holocaust Education Centre, with the support of the Jewish Community Foundation. The performance takes place Nov. 19, 8 p.m., at the Rothstein Theatre, and it will livestreamed and available on demand; it will include a facilitated talkback and a reception with the artists. The exhibition and workshops take place Nov. 12-19 in the gallery. For tickets and more information, visit chutzpahfestival.com.