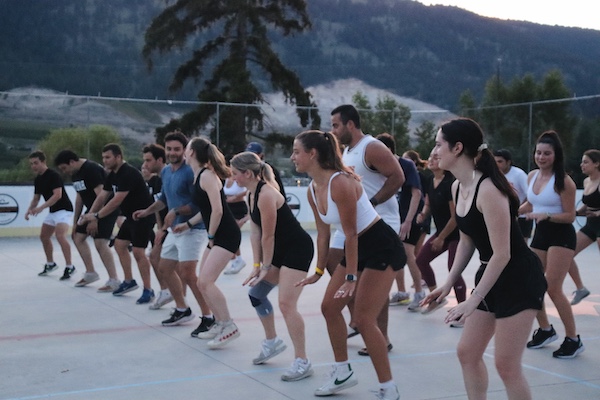 Counselors last summer learning the words and moves to Israeli pop music so they can teach the campers. (photo from Camp Hatikvah)

As Israel prepares to celebrate its 75th birthday, Camp Hatikvah looks back fondly at its long and meaningful connection to the Jewish state.

Established by members of the Young Judaea youth organization, Camp Hatikvah was Western Canada’s first Zionist summer camp. Developed in the aftermath of the Holocaust, Hatikvah was created to “produce proud, happy Jewish youth who were earnest and sincere in their beliefs” and committed to the rebuilding of the Jewish people and homeland. Activities offered included arts and crafts, drama, music, athletics, singing and dancing, but the basis of the program was designed around providing campers with a strong background and knowledge of Jewish and Zionist affairs.

One of the original goals of the camp was to promote aliyah and many of the camp’s participants have indeed gone on to join a kibbutz, study in Israel, serve in the Israel Defence Forces or raise their families in Israel. However, the camp leadership eventually realized that mass immigration was unlikely and began focusing on another important task – ensuring that Canadian Jewish youth truly understood the importance of the Jewish state and their role in nurturing and protecting it.

For campers of the 1950s, ’60s and ’70s, programming was focused around concepts of pioneering and perseverance. Israel was still so young and so vulnerable and participants united in their shared passion not only for its success but its survival. The counselors were impassioned leaders who created meaningful opportunities for learning. Education was key and advocacy was a responsibility.

By the 1980s, things were changing. The campers of that era were used to the idea of a strong Israel and much of the Jewish state’s impressive accomplishments felt like distant “history” to many of the young campers. This created a challenge for the camp but one to which they rose. Rather than sitting the campers down and lecturing them, Hatikvah used the uniqueness of the camp setting to provide active education. Field games were used to teach about geography, history and conflict, with campers learning a great deal without even knowing it (that’s the best kind of education).

The early 1990s were a time of great hope. With the Oslo Accords having been signed, it was an exciting time for Israel and for Hatikvah but, unfortunately, it was short-lived.

In the late 1990s and early 2000s, Israel was shaken by one horrendous terrorist attack after another. While our community stood in solidarity with our mishpachah (family) in Israel, many Hatikvah families were not comfortable sending their children on Biluim Israel, a sister program that runs an Israel experience for Hatikvah’s campers the summer before they become counselors. The result was that, for several years in a row, Hatikvah had very few counselors on staff who had ever been to Israel. This reality created a radical shift in the camp’s Israel education strategy.

Joanna Wasel, current board president, was the program director at Hatikvah at the time. She recalled, “since our participants were no longer going to Israel, we knew we had to bring Israel to them.”

The focus of Hatikvah’s Israel education shifted from the past to the present. While campers still learned about important historical figures and events, most of the programming began to focus on culture.

“It was important to us that our campers saw beyond what was in the news,” said Wasel. “We didn’t want them to think of Israel only in terms of conflict. We wanted them to see the beauty and uniqueness of this truly special and resilient country.”

Thankfully, the situation in Israel eventually stabilized and campers once again returned to Israel, bringing back their knowledge and passion when they became counselors the following year. But the affinity towards more modern Israel programming stuck, and the focus at the camp remains based on building bridges between Canadian and Israeli cultures.

“Friday nights at camp are amazing,” shared Liza Rozen-Delman, camp director. “After prayers and a traditional Shabbat dinner, our campers spend the evening dancing to Israeli pop music. It is incredible to see. They know all the words – which are in Hebrew – and the fun dances their peers in Israel are doing. It’s so natural and so beautiful.”

These programs are facilitated by young Israeli shlichim (emissaries), who continue to be an important part of Hatikvah’s program. “With the exception of 2022, when COVID restrictions were in place, Hatikvah has always had Israeli shlichim,” said Rozen-Delman. “The experience is so meaningful both for them and for us.

“Hatikvah was founded to promote the dream of an independent Jewish state and so it is really special for us, some 75 years later, not only to celebrate how far Israel has come but to also recognize how important our partnership was both then and now,” she concluded. “As we say at Camp Hatikvah, may they – and we – continue with chazak ve’ematz (strength and courage).”