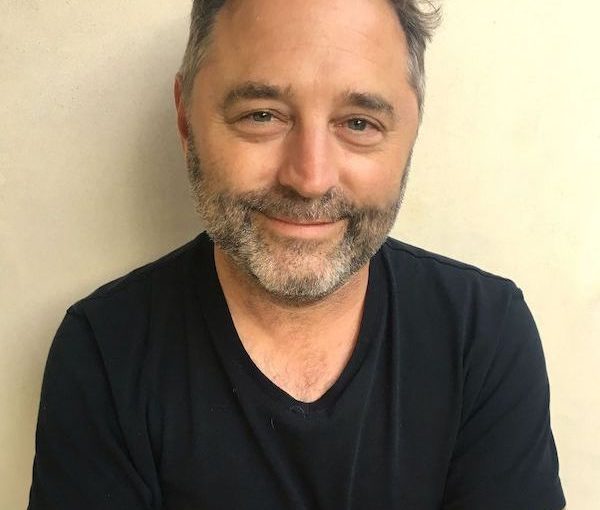 The experiences of Jews and Arabs in the area between the Jordan and the Mediterranean are complex and both peoples deserve to have their stories understood, according to a leading voice of progressive Zionism.

Daniel Sokatch was the keynote speaker at the closing event of the 2022 Cherie Smith JCC Jewish Book Festival Feb. 10. Sokatch is chief executive officer of the New Israel Fund, a U.S.-based nonprofit funding Israeli civil and human rights organizations and initiatives, which also engages in reconciliation and conflict resolution efforts between Israelis and Palestinians. He shared reflections from his new book Can We Talk About Israel? A Guide for the Curious, Confused and Conflicted, which was illustrated by Christopher Noxon.

“Over my years of service at NIF as the chief executive officer – I’ve been there for over 13 years now – I witnessed personally the discourse about Israel become more heated, more vituperative, more emotional and less fact-based,” Sokatch said. He wrote the book to give average people “a GPS to the conflict that would help them negotiate their own relationship to this complex issue.”

Israel was at the edge of an abyss before the new eight-party coalition government was sworn in last year, Sokatch said.

“This government is a Frankenstein’s monster made up of parties of the right, centre, left and Arab community that shouldn’t work but does work because enough people from all parties, except for the hard right-wing parties, knew that Benjamin Netanyahu was leading Israel over a cliff,” he said. “That was my editorial opinion but it is also the rationale for this government.”

A chunk of the Israeli public realized that Netanyahu was moving Israel toward neo-authoritarianism and a “democracy recession,” said Sokatch. This was exemplified, in part, by moves to abrogate the country’s balance between its Jewish and its democratic identities, he said. 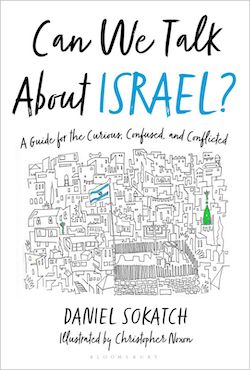 “Israel passed a series of laws – most of them, I think it’s important to note, passed only barely – that really reduce the standing of Arab citizens of Israel to something that looked a lot more like second-class citizenry,” said Sokatch. “The worst of these laws was something called the Nation-State Law.… The Nation-State Law essentially said to Arab-Israeli citizens, you may have the right to vote but only Jewish citizens of the state have the right to what the law says is ‘self-determination.’… It stripped Arabic of its official language status…. The only reason you do things like that is if you want to throw red meat to your base and make a statement to the minority about where they stand. Anyone who has been to Israel recently – and by recently I mean at any point during its entire existence as a state – knows that the Jewish character of Israel is under no threat. In that sense, the alarm raised by Netanyahu and that Nation-State Law was like [former U.S. president Donald] Trump’s Muslim ban. It was a draconian solution for a problem that doesn’t actually exist.”

Reuven Rivlin, who was president of Israel at the time, acknowledged that he was obligated to sign the bill into law, but promised to sign in Arabic, which he did as a symbol of protest.

“I happen to think that the Amnesty report is deeply flawed,” he said. But, on the flip side: “To dismiss it all as antisemitism is to, like an ostrich, stick your head in the ground and ignore the reality of the problem.”

If Jews worldwide are held responsible for Israel’s actions, that is antisemitic, he said. Likewise, if Israel is depicted as a tentacled monster controlling the world, or if Jews are depicted as clannish, disloyal and the embodiment of “cosmic evil,” these are examples of antisemitism. The hostage-taking at a Texas synagogue in January is another example.

“Why did the guy go to a synagogue, instead of a church or McDonald’s or wherever?” Sokatch asked. “He went to the synagogue because he thought the Jews could get him what he wanted. He thought that we were so powerful in the United States that we could pick up the phone and tell Joe Biden to let the person he wanted let out of jail let out of jail. When criticism of Israel engages in those tropes, you can bet your life it’s antisemitism.”

But these examples of bias should not blind people to the legitimate criticisms being leveled against Israel, he warned. He hopes his book will open up more dialogue.

“Too often, I think, we are afraid to talk about the hard things,” he said. “What is the role of Israel’s Arab citizenry? What is the relationship between the U.S. and Israeli Jewish communities, the two largest Jewish communities in the history of the world? What is the deal with the settlements? Is Israel an apartheid state? What is the boycott, divestment and sanctions movement? I didn’t want to shy away from those things. But I also felt strongly that, in order to have an intelligent conversation about them, or to hold informed opinions about them, you have to know what you’re talking about.”

The first half of his book is mostly straightforward history, he said, with his analysis in the second half. He encourages a more fluent understanding of the narratives of both peoples.

“These are two peoples, Israelis and Palestinians, Jews and Arabs, who have been victims of the world, of each other and of themselves,” said Sokatch. “I felt that it was important to hold both of their stories with compassion and curiosity and concern, and to acknowledge that both parties have legitimate claims to this little place between the Mediterranean Sea and the Jordan River. Both of these peoples have real histories of trauma and persecution and both of them have stories that help them understand who they are and where they are in the world and their connection to this place, and I wanted to tell those stories rather than just one of the stories.”

Sokatch appeared virtually in conversation with Dana Camil Hewitt, director of the book festival. Rikki Jacobson, chair of the festival committee, welcomed the audience and thanked the speaker.