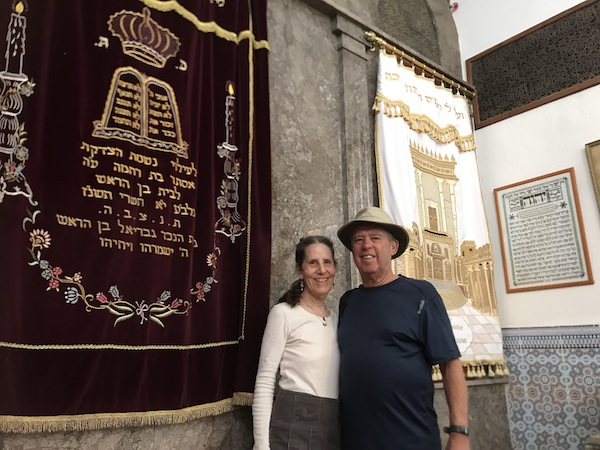 The writer and her husband at the synagogue Slat-Al Azama, in Marrakesh, which was built in 1492 by Jews expelled from Spain. (photo from Miri Garaway)

There are so many adjectives to describe Morocco, but, after being immersed in the country for three weeks and observing the people, the cities, the villages, the markets, the customs, the gardens, the arts and crafts, the architecture, and the potpourri of cultures that weave through this land, one can only conclude that Morocco is a fascinating, diverse country.

Morocco has an air of intrigue that enchants the soul and entices the curious traveler to explore beyond the realm of the imagination. The country has a way of drawing one in. It is the muse and inspiration for writers, poets, artists and craftspeople.

From scenes of everyday life and the feeling of stepping back in time, while navigating the uneven cobblestone streets of the medinas (old cities), to the overwhelming beauty of the landscape, one is transported into another world. Morocco is a land of mazes of narrow alleyways in the enchanting Medina; ochre-coloured earth; women grinding almonds to make argon oil; roadside markets; royal blue doors; rug weavers; tasty, elaborate tagines and mint tea; mounds of olives and spices; dramatic gorges; and captivating Berber villages. I could go on; the list would be long.

Through an extremely knowledgeable private driver, arranged by the company Journey Beyond Travel, we set about to include the Jewish sites of a once-vibrant community, which stretched back more than 2,000 years.

Landing in Casablanca, it felt like an oversize version of Tel Aviv, especially the drive along the beaches and the White City architecture.

During our tour of Casablanca, we visited the Moroccan Jewish Museum, which was once a Jewish orphanage (until the mid-1990s). How wonderful to see our history and culture displayed, with Torah scrolls, traditional clothing, daily life objects, paintings, sculpture and a library containing photographs, documents and videos of Jewish life in Morocco.

Walking through the enchanting, stunning and unique blue city of Chefchaouen, we happened upon the only remaining Jewish fabric merchant. We felt an instant bond, and he welcomed us into his small shop.

As we explored this vast country, we found traces of our ancient history in the archeological Roman ruins at Volubilis (near Moulay Idriss and Meknes); the epitaph of the synagogue rabbi in Greek, for example. The town of Ait-Ben-Haddou, now a centre for filmmaking, was once a significant Jewish community.

Traveling down a country road in Zaouit El Bir Dades, in the Valley of the Kasbahs, we stopped at a Jewish cemetery (all locked up) that was dated 1492.

When I had my first glimpse of the majestic imperial city of Fez, from atop a large hillside, I immediately thought of Jerusalem. The Medina of Fez is a huge maze of tiny alleyways, with colourful visual delights around every corner.

The Orthodox synagogue Ibn Danan was filled with Israeli tourists. Its predominant blue colouring reminded me of the ancient synagogues in Tzfat. The exquisite woodcarving and blue-and-white mosaics make it especially beautiful. It was built in the 17th century in the Jewish Quarter, known as the Mellah. In the mid-1990s, it was restored, and it reopened in 1999. It contains such elements as arches, wooden benches, tapestries and oil lamps.

Moses Maimonides, the Jewish scholar, philosopher and physician, escaped persecution by a fanatical Muslim sect in his native Cordoba, Spain, and lived in Fez from about 1159 to 1165, before moving to Palestine and then Cairo, where he could openly practise Judaism. In the Fez Medina, there is Maimonides’ House, which is a store containing an incredible selection of Jewish antiques and art.

When talking with the cultural director who organized our art and culture tour of Fez, she mentioned that, before 1956, Jewish women lived in Fez and were known for sewing the silk buttons on to men’s jellabas (Moroccan caftans).

In Marrakesh, in the Mellah, we visited the synagogue Slat-Al Azama, built in 1492 by Jews expelled from Spain. Off the courtyard, there is a series of rooms, acting as a museum, depicting Moroccan Jewish history. The Chefchaouen blue (a deep royal blue) doors and blue-and-white mosaics were particularly striking, as was the lovely synagogue. I could visualize it once teeming with life.

The charming coastal fishing town of Essaouira was once home to 70,000 Jews and 48 synagogues. Only three synagogues remain and we visited them all: Slat Lkahal, Haim Pinto and Simon Attia. At Slat Lkahal, we were given an informal tour by a Muslim woman; there were some fascinating historical photographs, which made the old community come alive. Nearby Haim Pinto, a small, wooden 212-year-old synagogue containing two Torahs – one original, one new – is painted a vibrant Chefchaouen blue.

Finally, Simon Attia Synagogue, located outside the Mellah, but within the Medina, is still in use today for the small community in Essaouira. It has a huge wooden door in the shape of a Gothic arch. After several attempts to gain entry during the week, when it was locked, we returned on a Saturday, around noon, and were lucky enough to go inside, as services were finishing. I was expecting a grand interior, but that was not the case. It was lovely, though, and we felt welcome and were glad for the opportunity to visit. One of the anterooms contained a small museum.

The hamsa, or Hand of Fatima, as it is known in Muslim countries, is everywhere in Morocco. One off-the-beaten-track place I would have loved to visit, about 28 kilometres from Fez, is the town of Sefrou, once inhabited by Spanish exiles and Jews from southern Algeria.

Did we feel safe traveling around the country? This is a question many people asked. Absolutely. There was a sense of unity among all religions. Perhaps a sign of hope for future generations.

Morocco is a country that must be seen. I am still in constant awe.