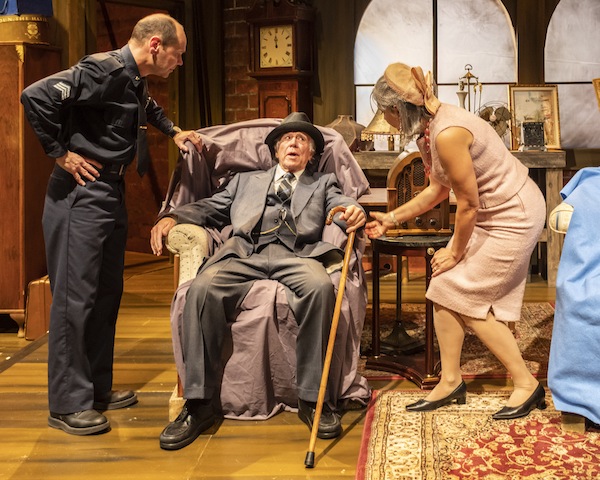 Left to right, Patrick Bahrich, Sjahari Hollands and Christine Iannetta co-star, along with Rob Monk, in United Players’ production of The Price by Arthur Miller, which is at Jericho Arts Centre until Dec. 1. (photo by Nancy Caldwell)

United Players of Vancouver theatre company has a reputation for tackling challenging, thought-provoking material and, with its current production, The Price, by Arthur Miller, it lives up to that reputation.

First to enter the scene – a room full of heavy, dated furniture, piled high and seemingly haphazardly – is Victor Franz (Bahrich), a New York City policeman. He slowly and almost lovingly uncovers some of the many items and puts a record on a Victrola – a laugh track of sorts, apparently a popular type of recording, once upon a time.

Victor’s wife Esther (Iannetta) arrives, amid the laughter, which contrasts to the obvious tension between the two. Victor immediately accuses her of being drunk, and she defensively replies, “I had one!”

The furniture belonged to Victor’s family and is being stored on the upper floor of the building in which they lived. His brother Walter (Monk) is supposed to be coming to help him sell it to an appraiser (Hollands), as the building is soon to be demolished.

The Franzes’ marriage could be summarized by the phrase “unfulfilled expectations.” Director Adam Henderson – who is a member of the Jewish community – has chosen to stage the play as a period piece, so that viewers will ponder how the roles of men and women have changed, and how societal norms have evolved (or not), since 1968, when The Price premièred on Broadway. Miller’s opening direction is, “Today. New York.” However, the today of 2019 is very different from that of 50 years ago, as is evident on several occasions, especially in how the men talk to and about Esther, and how her character is written overall.

Eventually, the appraiser stomps and puffs his way up the stairs to home-cum-storage unit. Eighty-nine-year-old Gregory Solomon was expecting there to be only a few pieces to consider and is overwhelmed by the volume of furniture. He also ends up entangled in the volume of resentment and distrust between the brothers, who haven’t spoken to each other for ages. Walter shows up at the end of Act 1, just as Solomon is paying Victor the agreed-upon price for the lot, $1,100, one $100 bill at a time.

Sweeping in, expensively dressed and broadcasting on more than one level his success and confidence, Walter is the brother who managed to escape their controling father and follow his dreams, while self-effacing Victor dropped out of college to take care of their father, who lost almost everything in the Stock Market Crash of 1929. But, as the conversation and argument proceed, it becomes apparent that neither characterization is accurate. Nor is there a clear verdict on what really happened all those years ago, as they are unable to reconcile their recollections of the past or their beliefs about each other and themselves.

Solomon – who has his own regrets in life – tells Victor, “… the price of used furniture is nothing but a viewpoint and, if you wouldn’t understand the viewpoint, it’s impossible to understand the price.”

We do not understand everything we do in life, let alone everything that other people do. The price that we – and others – pay for our choices is as obscure. And time doesn’t allow us to go back and change things; time is an ever-present weight in The Price.

There is no happy ending here, despite the humour that runs throughout, and the fact that the play both starts and ends with the laughter record. Once the Franzes have all left, the deal done, Solomon puts on the record. He flops into one of the big armchairs and laughs and laughs.

The Price will leave you with much to think and talk about. For tickets, visit unitedplayers.com or purchase them at the door.