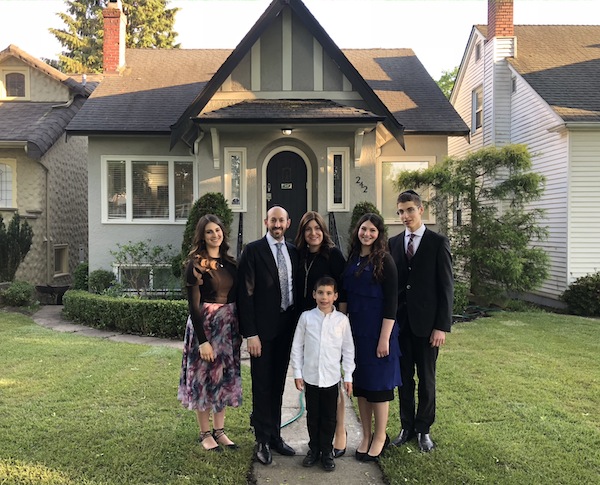 Rabbi Don and Meira Pacht with their children, left to right, Ora, Shimie, Shoshana and Aharon. (photo from Pacht family)

Pacht has been head of school at VHA since 2004. On July 20, 7 p.m., the school will host the Virtual Garden Party, honouring Pacht and his wife Meira for their service to the community and in support of the school’s Fortify Our Future campaign.

“Hebrew Academy is going to need the support of the community,” Pacht said. “And, as it goes through a leadership transition especially … we need to ensure they are fiscally stable.”

VHA has found a new head of school – Rabbi Barak Cohen, who will come here from St. Ives, Australia. “He used to live in Victoria,” said Pacht, “so he understands the West Coast of Canada as a community.”

Cohen comes with much experience in Jewish day schools, added Pacht, who has known Cohen for many years. The two rabbis have been in touch “in terms of passing the torch of the school,” but there won’t be a physical overlap. “For the next school year,” said Pacht, “I’m going to remain connected as a consultant and available, essentially, for Rabbi Cohen, for the board, for anyone who needs whatever is still in my head and not on paper.”

Pacht and his family will be in Vancouver until late July. They came here from Rochester, N.Y., via Torah Umesorah, the National Society of Jewish Day Schools. When the organization suggested the position in Vancouver, Pacht was interested because his friend Rabbi Dovid Davidowitz had recently come to the city, along with Rabbi Noam Abramchik, to set up the Pacific Torah Institute (which left Vancouver in 2019, after 16 years of operations).

Two aspects in particular of the city’s Jewish community struck him.

“Number one, there was a real growth-oriented spirit,” he said. As well, he added, “I think it is unique and special in the integration across the gamut of the community. You can live your entire life in New York City and never meet a Conservative Jew.” But, in Vancouver, “no one would think twice about attending Hebrew Academy’s events even though they themselves are not Orthodox or families of Hebrew Academy and I wouldn’t think twice about attending an event put on by another organization or school even though they’re not my ‘flavour’ of Judaism.”

That everyone works together “for the cumulative benefit of the broader community was very, very impressive to us,” said Pacht.

When Pacht began his first year at VHA, there were more than 100 students. Currently, he said, enrolment is just under 100. He pointed to demographic changes.

“In the 17 years that I’ve been here,” he said, “I would say we have been more successful over time in attracting a broader spectrum of families. But, we continue to lose Orthodox families in the community. There are rabbis who are leaving, or just families who have aged out of the school system. That’s really what happened to PTI…. All the pioneer families that helped establish the organization, all their boys went through and graduated and we weren’t replacing them with new Orthodox families.”

The exodus worries him, he said, “as someone who is concerned about the global Orthodox community and global growth of Torah and Judaism.” But, with respect to VHA, he said he believes the school “will be just fine” because it offers “a product that is not available in any of the other schools…. And, because it’s something that can’t be done anywhere else in Vancouver, Vancouver understands that we need it.”

For example, he said, if you’re a Schara Tzedeck family, you know that, in order to have rabbinic leadership at the synagogue, you need Orthodox education in the community. Similarly, if you want Judaics teachers, even in non-Orthodox schools, you need to educate those leaders.

When he first came to VHA, the school already had two portables and another was added. “At the height of our enrolment, we probably had 130 students in a facility that was really built for 60, and we accommodated them with three portables, and bursting at the seams,” he said.

“It was always the vision to find a more suitable home,” he continued. “We started with trying to buy the property from the Vancouver School Board.” While not successful in that effort, VHA did manage, a handful of years ago, to secure a 10-year lease from the school board. With that security, it launched a capital campaign to replace the portables and improve the property.

“The dream of being able to offer full-day daycare for 3- and 4-year-olds was finally realized a year-and-a-half ago, when we opened this new facility,” said Pacht.

Then COVID-19 hit. “It has been, without a doubt, the most difficult experience that any of our staff, myself included, can remember,” he said. Part of that was because it entailed a whole type of education that no one had been trained for – remote learning – but also because everybody has been traumatized in some way by the pandemic and schools have had to deal with much of the fallout.

VHA’s relatively small size was an advantage in this instance, said Pacht. “I think schools have been doing a phenomenal job overall, but it’s easier when you only have two cohorts instead of eight cohorts.” When students initially were permitted to attend school in-person again, for example, VHA could accommodate more of its student body within the capacity limits set by the government. Generally speaking, said Pacht, all of the students have since returned to the classroom.

Of accomplishments during his tenure, Pacht pointed to the new building and other physical improvements to the school, “along with the broader community profile. I think it’s a fair statement to say that the number of people who are aware of Hebrew Academy, whether or not it’s the school they send their kids or grandkids to, and the appreciation for Hebrew Academy, it has a very significant standing within the community…. It allowed us to expand and it allowed us to have a successful capital campaign. And it allows us to maintain a school of excellence…. I can say without a doubt that the level of education at this school is really top-notch.”

While Pacht and his family are leaving the city, he said, “This is where our children grew up. This is home – when my kids talk about home, they’re thinking Vancouver. We are leaving because an opportunity came up that we could just not say no to, and that is, I received an offer from a school in New York City that happens to be the elementary school that I graduated from … and it puts us in a neighbourhood where we are in walking distance to my parents, my children and my grandchildren.”

The Virtual Garden Party is free to attend, with donations welcome. To register, email [email protected] or call 604-266-1245.