It was Aug. 9, 2001. I was in Jerusalem after 19 years absence, to attend a convention and do research on a memoir, Witness to History: Ten Years as a Woman Foreign Correspondent in Israel (still unpublished). I was staying at the Sheraton (now the Leonardo). I left the hotel to meet my good friend and personal guide, Pat (z”l). She and I were going to the Bible Lands Museum for a reunion with a mutual acquaintance. All the traffic from the hotel down King George into town was blocked. We heard there had been a terrorist attack, but decided to go on with our plans.

Later, when we returned to the hotel, national board members were waiting for us and told us to go and call our families and tell them we were OK. One by one, Hadassah women came in with stories of having been on Ben Yehudah … of hearing an explosion and ambulances. It was the Sbarro restaurant terrorist attack.

Dr. Zieva Dauber Konvisser is a fellow of the Institute for Social Innovation at Fielding Graduate University in California. In 2003, she was at the Israel Centre for the Treatment of Psychotrauma in Jerusalem, beginning research on the “possibility of post-traumatic growth coexisting with post-traumatic stress.” Earlier this year, her book Living Beyond Terrorism (Gefen Publishing, 2014) was published. 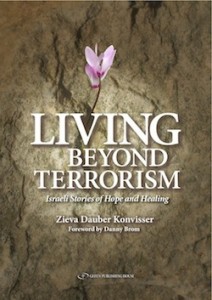 Founding director of the centre, Prof. Danny Brom, writes in the book’s foreword that Konvisser contributes to “the study of politically motivated violence by documenting many of the challenges that confront people who experience such violence and by elucidating the many ways people find to overcome the horrors of their encounter with deadly violence. Equally, this book contributes to the development of the concept of post-traumatic growth.”

Konvisser herself explains in the preface that the focus of this book is on “resilience or recovery and post-traumatic growth.”

Konvisser is a second-generation Holocaust survivor, having lost more than 30 relatives in Vilna. During a trip to Israel in 2002, she reflected how survivors of terrorist bombings moved beyond their traumas. Subsequently, she visited Israel eight times between 2004 and 2010 to speak with such survivors.

She spoke with 24 survivors in 2004, who made up the research study sample for her doctoral dissertation, then revisited them in 2007, interviewed seven more plus 15 Arab Israelis. In 2013, she again asked them to reflect upon and describe changes in “their family, work, health and/or outlook in life since the previous interviews. The result is 36 stories as told by 48 survivors and family members with 33 incidents described.

The book is a tribute “to those who survived attacks with or without disability or loss, as well as family members of those who perished…. By telling and retelling their stories, we celebrate their lives as people – as human beings.”

Among the most amazing aspects of the book is one of the three appendices, which lists 58 organizations supporting terror survivors and families. There is also a glossary and a selected bibliography.

This is a very difficult book to read. Every story is upsetting and painful, whether one has personally experienced a terrorist attack, is related to someone or is acquainted with a victim. However, Konvisser notes 12 qualities common to these survivors, which could be “cultivate[d] to master any crisis.” These include:

• They struggle, confront and ultimately integrate painful thoughts and emotions.

• They adjust their future expectations to fit their new reality.

• They call on their inner strength, core beliefs and values.

• They are helped to move forward by strength gained from their past experiences and prior adversity.

• They are helped by spirituality or grappling with fundamental existential questions.

• They stay healthy and focus on their fitness level.

• They are creative, find the silver lining and give back, moving forward with action.

• They stay connected and seek outside resources to help them through rough times.

• They tell their stories and try to make sense of their lives.

• They are hopeful, optimistic and celebrate life.

May we all learn from their experiences.