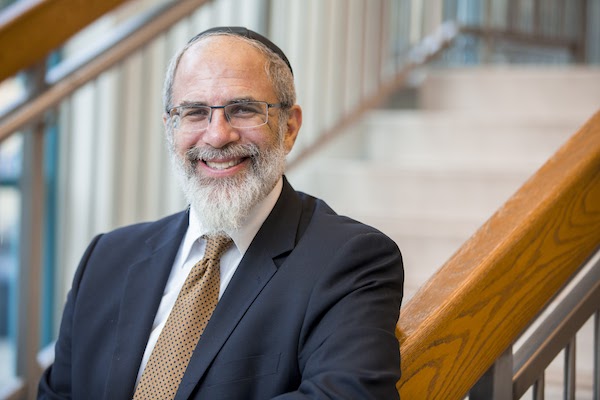 What do country music superstar Shania Twain and Orthodox academic Dr. Henry Abramson have in common? They both spent plenty of time in Timmins, Ont., before moving on to adventures in New Zealand and the United States.

While not as widely known as Twain, Abramson – the dean of arts and sciences at Tuoro’s Lander College in Flatbush, N.Y. – is popular in different circles. For example, during this interview, he mentioned an in-depth article about him in Der Veker, a Yiddish-language journal. He is known as a knowledgeable and entertaining lecturer – facts that the local community can check out for themselves in his five-part series Jewish History, But Skipping the Boring Parts, which began on Feb. 9. Sponsored by the estate of Sara Elias and hosted by Congregation Beth Israel, the series is open to the entire community.

The first lecture zipped through Jewish history touching on, as promised, the non-boring bits of history that are supported by archeological evidence. Many of the earliest artifacts are negative views or accounts of what we now call the Jewish people and Abramson was quick to point out, with humour, that these ancient people wrote nasty things about Jews but we’re the ones still around thousands of years later.

By the end of a well-polished 45-minute presentation, which included lots of images to break up the narrative, and a 15-minute Q & A, the 100-plus attendees were up to speed on the Maccabean revolt. One highlight was numerous examples of medieval depictions of a famous battle in which Judah Maccabee’s brother, Eleazar, kills an elephant. This story was popular with Christian medieval artists but their knowledge of elephants was clearly lacking.

Born in Iroquois Falls, Ont., Henry Abramson was the only Jewish boy in town. His grandparents had fled Lithuania in 1904 and found themselves in this town with a population of about 1,000. Abramson’s grandfather, and then his father, ran the town’s dry goods store. His parents’ commitment to ensure that he had a Jewish home life, education and sense of community are how he found himself in Timmins every Sunday as a child. His parents drove 100 kilometres each way, every week, to take him to learn with other Jewish children from the area. Abramson’s comment about Jews in tiny rural places was, “Break open a roll, out pops a Jew.”

Three years before his bar mitzvah, his parents went one major step further with his Jewish education. They found an apartment in Toronto and enrolled him, for a few years, in Eitz Chaim, a religious day school. His mother stayed with him during the week and his father took the train down on the weekend. Abramson said his father’s greatest talent in preserving the Jewish identity of his family was his ability to listen to the women in his family.

“My whiplash-like experience – going from being the only Jewish kid in town to the only northerner kid who knew what 40-below felt like – tempered my understanding of how Jews fit in the world as a whole,” he said.

After high school, Abramson enrolled at the University of Toronto, where he obtained a bachelor’s degree in philosophy. Disillusioned with his studies, he flew to New Zealand to become a ski instructor. There, he fell in love with another ski instructor. Having grown up skiing, Abramson was living the dream and had planned to continue traveling the world, but he was involved in a ski accident that severed his femoral artery. During the six-month recovery that followed, he rethought his future and focus. He and his then-soon-to-be wife Ilana returned to Toronto, where Abramson earned a master’s in history.

Although the pair was involved in a Conservative shul during the early years of their marriage, they became attracted by the BAYT (Beth Avraham Yoseph Shul) in Toronto and began moving towards Orthodox observance. To complete his doctorate, Abramson went to Jerusalem to work at Hebrew University. After earning his PhD, he spent a year learning at Ohr Somayach Yeshivah, cementing his life as an Orthodox Jew. He went on to complete post-doctoral work at universities including Harvard and Oxford, and has written seven books.

To join the lecture series and find out how well Abramson delivers only the most exciting parts of Jewish history, visit bethisrael.ca. The remaining lectures take place on Zoom March 9, April 6, May 11 and June 1, 7 p.m. Visit bethisrael.ca.