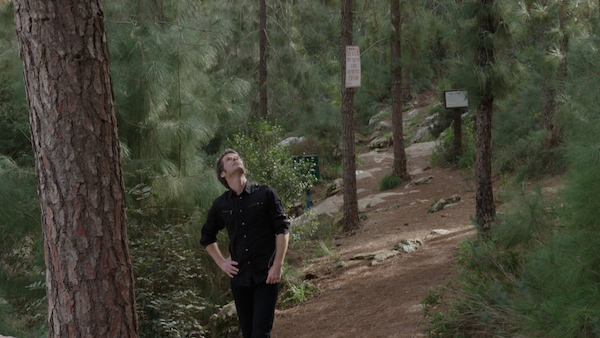 Jason Sherman wanders through an Israeli pine forest in search of his tree. (photo by John Minh Tran)

My Tree, a film by Jason Sherman on his moral dilemma over having had a tree planted in his name in a Jewish National Fund forest, screens at the Salt Spring Film Festival March 6, 7 p.m.

Sherman grew up in a Jewish home in Toronto. “Like my brothers before me, I had a bar mitzvah…. On that day of my becoming a man – at the age of 13 – I was given a number of presents,” writes Sherman in his director’s statement. “There were books of Jewish learning and culture; there was money; and there was a tree. Or rather, there was a certificate telling me that a tree had been planted in my name in Israel.”

He forgot about the certificate until about 40 years later, on his first trip to Israel.

“As I wandered the tourist sites, traipsing around religious Jerusalem, secular Tel Aviv and mystical Masada … I felt the pull of kinship and familiarity,” he writes. “But I also felt a kind of disconnect, wondering if my feelings for the place were genuine or imposed. I got to wondering what my real connection was to the land. It was then that I remembered the tree.”

After much research and metaphorical digging, he determines that the likeliest location of his tree is a conservation area called Canada Park.

“Here, I learn a disturbing new fact about my tree: it’s part of a massive forest that’s covering up the remains of an Arab village that was destroyed in 1967, its thousands of inhabitants sent on the road, never permitted to return.

“I also learn that this covering up of depopulated Arab villages is part of a pattern that stretches back to 1948, during the war that established Israeli statehood. These revelations lead me to ask a number of painful questions with people back in Canada. Did my parents know about the village beneath the forest when they donated a tree for me there? What is my responsibility for that tree?”

Sherman, who is an award-winning playwright, says his aim is not journalistic. “This is not a muckraking, finger-pointing documentary about the dark history of Israel’s tree planting program but rather a personal story … that asks its audience to confront uncomfortable historical truths, and to decide for themselves how to respond to those truths.

For tickets to My Tree, visit artspring.ca/event/salt-spring-film-festival-my-tree. For more about the film festival, which runs March 1-6, go to saltspringfilmfestival.com.