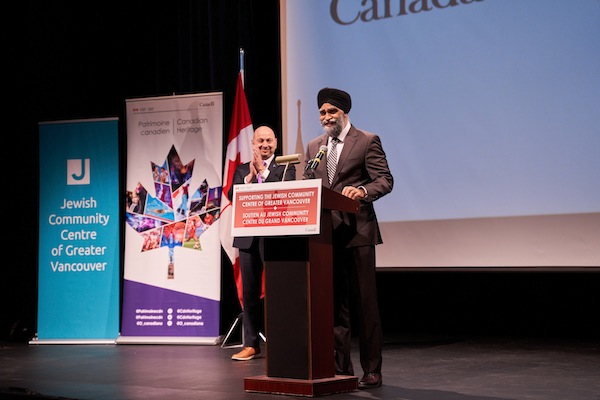 On Dec. 5, the Jewish Community Centre of Greater Vancouver (JCC) announced that it has received $25 million in support from the Government of Canada through the Department of Canadian Heritage. The funding will be used for the redevelopment of the 3.3-acre property at West 41st and Oak Street. It will support the transformation of the JCC into a state-of-the-art multigenerational community hub in the Oakridge area with more childcare spaces, expanded seniors programs, arts and cultural spaces, and an expanded Vancouver Holocaust Education Centre.

“The Government of Canada stands with Jewish communities across Canada and around the world. Today’s investment is part of our commitment to an inclusive Canada that is strong and proud of its diversity. Supporting cultural facilities is essential, not only to retain their viability today, but to help them flourish for generations to come,” said Minister of Canadian Heritage Pablo Rodriguez.

“The Jewish Community Centre of Greater Vancouver is now another step closer to building a larger community hub where Vancouverites of all backgrounds can connect through shared experiences, while allowing the centre to continue providing services and supports that enrich quality of life in our city,” said Harjit Sajjan, minister of international development, minister responsible for the Pacific Economic Development Agency of Canada and member of Parliament (Vancouver South).

The redevelopment of the JCC is the cornerstone of the overall site redevelopment plan, which will also provide permanent homes for more than 20 not-for-profit community organizations and two residential towers that will provide mixed-use rental housing, some to be at below-market rates.

The JCC, Jewish Federation of Greater Vancouver and King David High School have signed a memorandum of understanding that will see them work together to fulfil a shared vision rooted in extensive community and public consultation.

“The funding from the Government of Canada through the Department of Canadian Heritage contributes the resources necessary to support and sustain the Jewish community in Vancouver,” said Eldad Goldfarb, executive director of the JCC.

“The new space is poised to be a connection point that people of all ages and from all walks of life can enjoy for generations to come, and the legacy of this redevelopment will last a lifetime,” he added.

“This announcement is the result of efforts that spanned many years,” said Ezra Shanken, Jewish Federation chief executive officer. “We want to thank the Government of Canada and our advocacy agent, the Centre for Israel and Jewish Affairs, for their work on this.”

Monday’s announcement builds on the $25 million funding provided in 2021 by the B.C. government and a $25 million gift and community match from the Diamond Foundation.