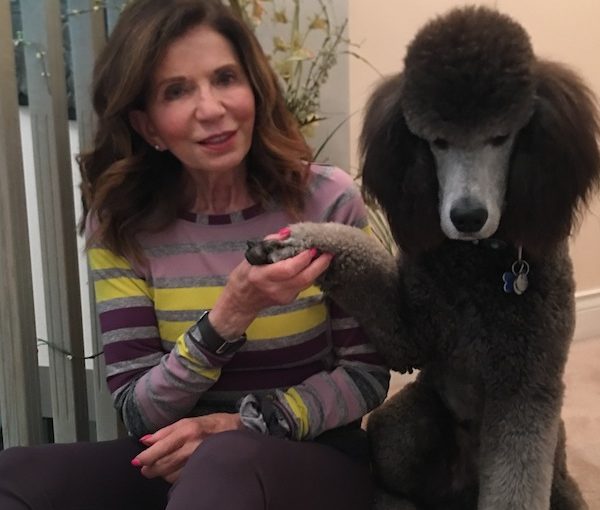 The author with her dog, Kesem. (photo from Dolores Luber)

It was mid-March. All I had been hearing and seeing on the news were the words and images related to contagion, epidemic, China’s wet markets, people enjoying the delicacy of cooked bats, pandemic and COVID-19. It was getting louder and closer, somehow it traveled from China across the Pacific to Vancouver. We were now dealing with the pandemic in Vancouver, we were in lockdown, even if the government never called it that.

In a flash, my household emptied out. My housemate, a University of British Columbia student, went back home; all her courses were now online. My boarder, a psychiatric nurse, scared of catching the virus and infecting me and her immune-compromised partner, took a six-month leave of absence from her work and joined him on a sailboat off the coast of Vancouver Island. I cleaned and organized and then it hit me – I was alone in the house with my Standard Poodle puppy Kesem. His name means “magic” in Hebrew and he truly is a wonderful companion, but….

Lockdown, what was that? We all had to create our own version. I maintained my Hebrew classes by means of Zoom, I continued working out with two personal trainers in my home gym. We did not touch each other. I went to the off-leash dog park every afternoon. We practised social distancing.

Then, a classmate of mine became hospitalized with the virus – I had not seen her for 10 days. I isolated myself for an additional week, not one of our group became ill. She is the only one I know who has contracted the virus. I was feeling proud of myself, I was managing well. As the editor-in-chief, I had produced the July edition of Senior Line magazine for Jewish Seniors Alliance on schedule. It was a labour of love, responding to the pandemic and the issues of the times. Everything was under control.

July 22 is my birthday. At the beginning of July, I began to feel very lonely. I had not seen any of my four sons, daughters-in-law or nine grandchildren for a long time. The planned family reunion in Oakville, Ont., was an event I had been looking forward to. My children had grown up in Beaconsfield, Que., and my youngest son had organized a fabulous get-together of all his friends who lived in the neighbourhood during his childhood. Photographs were collected, videos created, all plans had been made before the lockdown.

We gradually began to understand that the situation was not going to end soon; we were in it for the long haul. The reunion was canceled. I always see my children on my birthday, but, this time, I received FaceTime calls, beautiful cards, splendid flowers, but no hugs, no kisses, no warmth, no human touches. My thoughts were becoming very negative and gloomy; worst-case scenarios played in my head. I thought of moving back to Ontario to be with my youngest son; I researched buying a house in Oakville. I was experiencing symptoms of depression.

As a retired psychotherapist, I recognized the symptoms – among them, exaggerated feelings of sadness and loneliness. I made an effort to study more and read more Hebrew. I pushed harder in my workouts with my trainers. I developed and implemented a plan for the fall Senior Line magazine. By the end of July, I was thinking in a more balanced fashion. I had gotten through the rough spot and was well again.

Depression can be insidious, it can creep up on you. It is important to do a reality check with friends or family members from time to time. Isolation warps the processes of the brain. The chemicals in our brains can become unbalanced. Usually increased physical activity and enhanced social interaction can counteract the symptoms of mild depression. Beware!