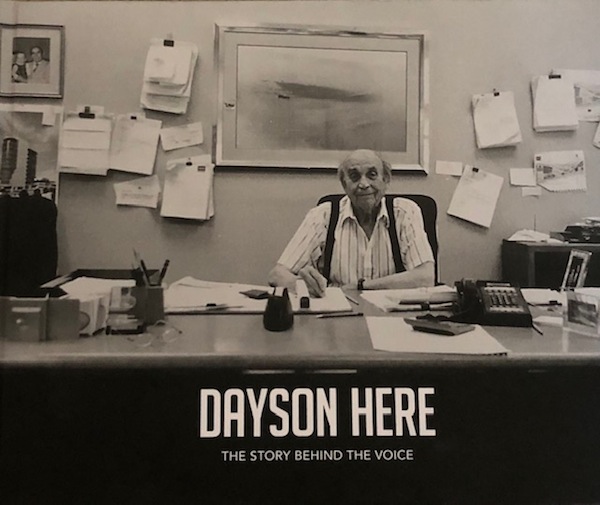 Dayson Here portrays Ben Dayson’s innate business acumen and his economic success, as well as his unwavering devotion to his wife, Esther.

Following the publication of the Nemetz family biography Don’t Break the Chain: The Nemetz Family Journey from Svatatroiske to Vancouver, in 2017, comes a new book called Dayson Here: The Story Behind the Voice, compiled and written by Shirley Barnett and Philip Dayson.

Anyone who met Ben Dayson knows he was larger than life. Standing at five feet, six inches (or thereabouts), he was a giant among men. People knew him for many things, but primarily his business success, his deep and abiding love for his “beautiful wife” Esther, and his close family. What’s missing from that picture are his modest beginnings in Ukraine, the journey that brought him to Vancouver, and the man behind the voice. The new book, comprised mainly of direct quotes from Dayson – thanks to the Dayson/Barnett families and the Jewish Museum and Archives of British Columbia – and black-and-white photos, tells a more intimate story of his life. My favourite quote of his is: “I know nothing and you know even less!” Pure Ben Dayson.

The book portrays not only Dayson’s innate business acumen and the extent of his economic success, but also his unwavering devotion to his wife, Esther. She was the epicentre of his life, the voice of reason and the sole calming influence in his life.

It’s no secret that Dayson was an extraordinary character. He made his presence known, and loved to “work a room.” Within the space of a few hours, he could be loud, moody and assertive in his office, then morph into a charming, polite man in a social setting.

Dayson was very interested in real estate development, first residential and, later on, commercial. He had a natural business sense, despite having little to no formal education. There’s no question that his obsession with building and developing fed the fire in his belly. He’d often drive friends around to visit his buildings.

Starting life in Canada wasn’t easy, but, with determination and sheer energy, he parlayed his first business ventures into greater and greater things. Ironically, his difficult start in life (his father died when Dayson was 15) primed him for later success. Having witnessed pogroms and antisemitism, Dayson was determined to have a better life for himself and his family. When a cousin in Kamsack, Sask., sent papers to help him come to Canada, that gave Dayson the impetus to build that good life. Traveling from Ukraine to Moscow, then Riga, Berlin and Rotterdam, Dayson’s world opened up. In Rotterdam, “he became acquainted with new things in life – chocolate, coffee, white bread and girls.”

But Dayson became impatient to get to Canada. In anticipation of his future, he bought a few essentials: a new suit, a pair of shoes and a hat, which left him with only $7. His arrival in Canada took him from Halifax to Montreal to Winnipeg and then to Kamsack, where he settled in 1927. Beyond most everything else, gaining Canadian citizenship was one of his proudest accomplishments. A more patriotic man you could not find.

Friends from his hometown sent word that Esther Nemetz, who grew up just blocks from Dayson in Ukraine, was living in Vancouver – and she was a beauty. Despite never having met her, Dayson began a correspondence with her in 1931. He courted her by mail, despite that she was engaged to a doctor from London, Ont. Dayson’s trademark perseverance won the day and their romance grew. As some people know, Dayson began life as Boruch Deezik, but, at the urging of his wife-to-be, he Americanized his name and became Ben Dayson.

Nemetz’s six brothers had done well since their arrival in Canada and she benefited from their generosity, having the “wedding of her dreams,” after which, the couple moved to Viscount, Sask., where Ben Dayson had already purchased a general store. The book recounts that “Esther sold her furs and diamond rings to help buy inventory.” Their business grew, they made more money, and became community leaders.

Working together as partners, Ben and Esther Dayson grew their family and built a good life. They moved to Saskatoon and bought a meat market, which also did well. In 1949, Esther suggested they move to Vancouver, since her six brothers and two sisters lived there. Living in the big city, the Daysons involved themselves in the Jewish community, surrounded themselves with extended family and expanded their social circle.

In 1951, Dayson discovered real estate and became consumed by it; he built numerous apartment buildings in Vancouver, Richmond, Burnaby, New Westminster and West Vancouver. He had a remarkable sense of what would work and what wouldn’t in the real estate world. He was a pragmatist and a savvy, self-taught businessman. In the 1970s and 1980s, he discovered industrial property, and the book paints a picture of a tenacious but principled man who always got what he wanted. Unless his wife vetoed it.

Throughout their life, Ben and Esther Dayson were great philanthropists and ardent supporters of Israel. Among the many causes they supported was the Richmond Public Library, where I was first introduced to Ben. Having built the first high-rise apartments in Richmond and benefited from them, Dayson felt he owed a debt of gratitude to Richmond. So, in 2004, the couple gave $50,000 to the Richmond Public Library Endowment Fund, one of the library’s largest single donations.

An avid reader and lover of books, Ben Dayson also gave most of his personal Judaica book collection to the library, and established the Ben and Esther Dayson Judaica Collection at the Brighouse (Main) Branch. Thanks to the Daysons, the library is now home to one of the Lower Mainland’s largest Judaica collections, and includes Jewish books, DVD movies and newspapers. In 2004, Ben Dayson was awarded the British Columbia Library Association Keith Sacré Library Champion Award for his support of libraries, literacy and public access to information.

As a senior librarian at the Richmond Library, I had the honour and pleasure of working closely with Ben Dayson to develop this collection. He maintained a hands-on approach to the collection, and would regularly buy and donate Jewish-themed books to the library. Always insisting on an accurate (and usually immediate) accounting of the books he donated, I would often get calls from him, asking (telling?) me to come to his home with the library’s laptop, so I could type out an author/title list of the books he donated.

This was a regular occurrence. But I remember one particular time when there was a bad snowstorm. It was a Friday night and my home phone rang at around 8 p.m. It was Dayson. He said, “I have books for you. Come and get them.” I recall asking him, “You mean right now?” To which, naturally, he replied, “Yes.” It was around 2006 and I didn’t yet own a personal laptop. Knowing that few people ever say no to Ben Dayson (and live to tell the tale), I drove through the snowstorm to his home, bearing a pad of paper and a pen. The rest is history.

Dayson Here: The Story Behind the Voice is filled with fascinating information about the Dayson family business. But there are also plenty of surprising and humorous anecdotes demonstrating how passionate Ben Dayson was about issues that offended him personally. He pursued causes until he got a satisfactory resolution, or was forced to give up the fight, like when the government revoked his driver’s licence at age 95.

As Shirley Barnett said so eloquently in her father’s eulogy, Ben Dayson “lived his life loud and clear.” It’s nearly impossible to encapsulate the enormity of his personality, but this book does just that, with humour, honesty and love. His headstone says it all: “Once met, never forgotten.”

Copies of Dayson Here are available at the RPL Brighouse branch, the Isaac Waldman Jewish Public Library at the Jewish Community Centre of Greater Vancouver or by contacting the authors directly.