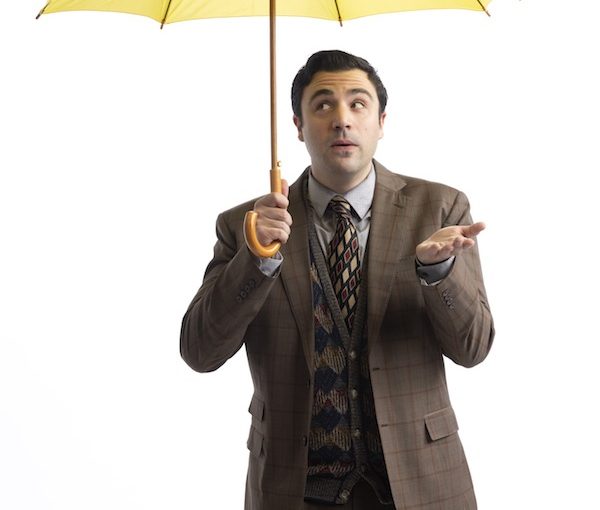 Andrew Cohen takes on the lead role of Don Lockwood in Royal City Musical Theatre’s Singin’ in the Rain, which runs April 4-20. (photo by David Cooper)

“I’m excited for audiences to see Singin’ in the Rain. The film is a classic, and I hope we’re able to bring that same charm and excitement to the Massey Stage,” Michael Wilkinson told the Independent. “It is on the older side of the musical theatre canon, but I think our production – especially Andrew Cohen as Don Lockwood and Tessa Trach as Kathy Selden – do such a beautiful job at bringing these characters to life in 2019, while still keeping the familiarity and charm of the characters and story.”

Royal City Musical Theatre presents Singin’ in the Rain at the Massey Theatre in New Westminster April 4-20. For those unfamiliar with the story, Don Lockwood and Lina Lamont are silent film stars, dashing and beautiful, but their stars will fade unless they can make the transition to talkies, the new technology of the time. The studio decides to change the couple’s latest silent film into a musical but, the problem is, Lamont has a horrible voice – even listening to her talk is painful. The solution? Have her voice dubbed by aspiring actress Kathy Selden.

Filled with humour, eminently singable and memorable music – “Good Mornin’,” “Make ’em Laugh,” and, of course, “Singin’ in the Rain,” to name a few – and incredible choreography, Singin’ in the Rain is one of the most popular musicals of all time, while also being an insightful commentary on the film industry, the impacts of technology and the nature of fame.

Cohen said he was asked to audition for the role of Lockwood last fall, while he was away doing Fiddler on the Roof in Saskatchewan.

“Gene Kelly made this role, this music, famous. He is in every neuron of this show. But I am no Gene Kelly (though I sure do wish I had his moves),” Cohen told the Independent about making such a famous character his own. “I think any actor preparing to take on an iconic role like Don Lockwood needs to find where the character lives within themselves rather than trying to mimic the character’s originator.”

And Cohen has more than the chops necessary to step into Kelly’s shoes. Since the Jewish Independent featured Cohen and his wife, Anna Kuman, in 2017, when they premièred Circle Game: Reimagining the Music of Joni Mitchell – which they co-created and co-directed – the couple has been working on different projects around the world.

“We were on the mass choreography team for the Fifth Asian Indoor and Martial Arts Games opening ceremony in Ashgabat, Turkmenistan, that had us work with a cast of 8,000, not to mention aerialists, horses, dogs, camels,” said Cohen. “It was a crazy experience! I then joined the stage management teams for the Gold Coast Commonwealth Games and the Sydney Invictus Games opening and closing ceremonies, getting to work at the Sydney Opera House and along the stunning shores of the Gold Coast.”

Cohen also premièred the new musical Les Filles Du Roi, for which he had to sing in English, French and Kanienké:ha (Mohawk). “Last winter,” he said, “I reconnected to my ancestral roots in the shmatta trade by playing Motel Kamzoil the Tailor in Fiddler on the Roof at Persephone Theatre in Saskatoon. Also, being the show’s music director, this production boasted a cast full of actor/musicians and was extended four times due to popular demand.”

While he’s very excited to return home and “dust off” his tap shoes for Singin’ in the Rain, Cohen won’t be in town long. He’s “heading to Toronto, Tel Aviv and Europe this spring for a tour of the new Canadian show Charlotte: A Tri-Coloured Play with Music that chronicles the life of renowned Jewish painter Charlotte Salomon.”

“Both my wife and my brother have worked with them before,” he said, “but this is my first time with RCMT, so it’s lovely to get to join the club, especially since RCMT is a theatrical institution for large-scale classic musicals. Seldom do audiences (and actors alike) get to revel in the grandeur of the art form in this town than at the Massey Theatre every April.”

“It’s the community that keeps me coming back,” he said. “Obviously performing is very fun, but I’ve also made some great friendships through RCMT. It has become something to look forward to in April, and it’s the people that make it such a wonderful environment.”

Wilkinson is in his final year of studies at the University of British Columbia’s Institute for Gender, Race, Sexuality and Social Justice, so he’s not sure how long he’ll be able to continue performing with RCMT, but he feels “very fortunate to have been a part of five productions over the last few years.” As part of the ensemble in Singin’ in the Rain, he has more than one role.

“The Quartet,” he explained, “is a part of the number ‘Beautiful Girl,’ which is a big showgirl number that is the first ‘talkie’ by Monumental Pictures (the film production studio in the show). Typically, the number only has the tenor soloist and the female ensemble, but our director and choreographer, Valerie Easton, has added four of the male ensemble to create a quartet and have some fun partnering moments in the number. It’s really just a quick snippet of the show, and many of us in the ensemble jump around playing multiple parts. I’m also playing Rod, who is the head of the publicity department at Monumental Pictures, which has been a fun bit role.”

Wilkinson’s favourite scene, he said, “would have to be the number ‘Broadway Rhythm,’ which happens about halfway through Act 2. It’s around eight minutes long, and there is some amazing dancing and singing throughout the number. I think the audience will really enjoy it, especially once we have rehearsed it to perfection!”

For Cohen, the biggest challenge so far with the role of Lockwood has been “the sheer amount of material to learn. Don sings and dances a lot. In Act 1, he barely leaves the stage,” said Cohen. “Prepping for this show has been like training to do a marathon – every day a little further, more lines down, going over and over songs and dance breaks. That said, I grew up tap dancing but haven’t had the chance to tap professionally in a long time. It’s a real privilege getting to tap with some of the amazing tappers in this company.”

Cohen said, “It’s very exciting, seeing it all come together with the sets and the lights and the orchestra. How often do you get to sing with a real 18-piece orchestra?!”