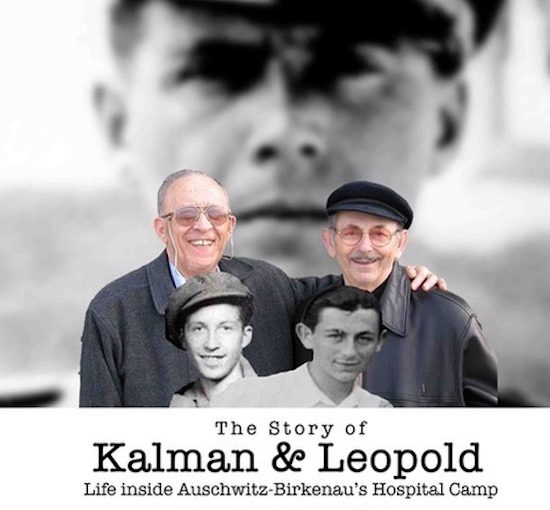 Recollections of day-to-day details at Auschwitz-Birkenau death camp by survivor Kalman Bar-on are being made public for the first time in Canada at an International Holocaust Remembrance Day presentation in Vancouver on Jan. 26 at the Rothstein Theatre.

The Story of Kalman & Leopold features previously unseen testimony, providing a unique glimpse at the Nazi atrocities committed at the extermination camp, given from the vantage point of a Jewish witness posted in a camp guard shack. The presentation takes place on the eve of the 78th anniversary of the liberation of Auschwitz-Birkenau.

The testimony of “Mengele twin” Kalman Bar-on will be revealed by Richard K. Lowy, a Jewish Canadian and the son of Holocaust survivor Leopold Lowy – another twin who was subjected to SS doctor Josef Mengele’s gruesome human experiments at Birkenau’s hospital camp during the Holocaust.

Richard Lowy was on a decade-long mission to preserve his father’s recollections as Canada’s last surviving “Mengele twin” when his efforts yielded an unforeseen link to Bar-on in Israel.

“I will try to paint this map of fear,” begins Bar-on’s testimony, “pointing out the difference between fear from the paws and boot of SS Guard Sgt. Fritsche Fritz, the palpable fear for our lives when witnessing a delivery of the next batch of walking skeletons to the crematorium, the ice-cold grab in my chest when I am lying on the stone table during the periodic medical checks of Mengele, and the ever-present knowledge that no one, but no one, will survive and emerge from Birkenau.”

“We produced Leo’s Journey (leosjourney.ca) in 2000,” writes Lowy. “The documentary was presented in Canada, part of Europe and in Israel.”

When the film played on the National Geographic Channel in Israel on Oct. 31, 2001, an astonishing thing happened, Lowy said. “Precisely 21 minutes and 17 seconds into the film, a picture of my father, Leo Lowy, was shown as a young boy. [A] man dropped his dinner and started yelling at the screen: ‘It’s my Lippa!’ Kalman Bar-On had been looking for his ‘Lippa’ for 56 years. Lippa was his hero in Auschwitz-Birkenau and saved Kalman from beating in the hospital camp’s SS guard shack.”